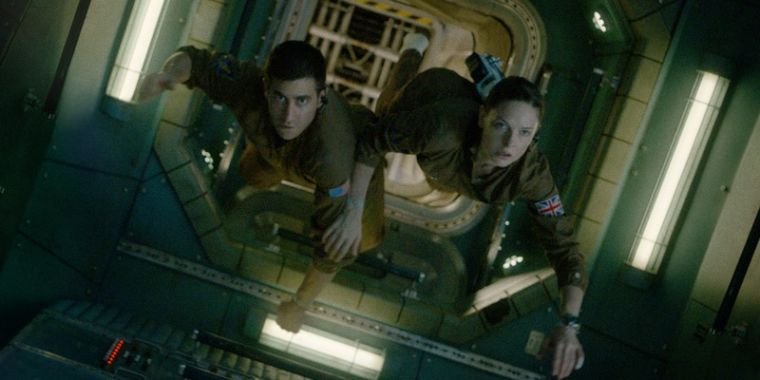 We’ve had our eye on it LIFE since the first trailer came out in October. In the movie, which will hit theaters March 24, a six-member crew of scientists and astronauts aboard a staged movie version of the International Space Station intercepts a return probe from Mars; upon examination, the probe appears to have returned at least one viable life cell from the surface of Mars.

The footage of a crew working on and in a near-future International Space Station had the same sense of verisimilitude that Gravity so captivating to watch, but the film’s premise seemed to undermine the images’ attempts to be accurate. Because of course that one life cell quickly turns into a space monster and starts killing people.

It’s a time-tested formula, explosively popularized by Ridley Scott’s 1979 masterpiece Alien and since repeated with varying degrees of success in multiple films in each decade. LIFE however, the formula takes a bit of a different direction, as according to the film’s second trailer, it’s set not in the distant future or even the near future, but in the present.

We had the opportunity to sit down with some of the movie’s science advisors to talk about what the movie is and isn’t. First up was retired European Space Agency Project Manager Rudolph “Rudi” Schmidt, who worked on a number of major ESA missions, including Mars Express, Venus Express and Gaia (space industry protip: “ESA” is pronounced “ee’-suh, ” not “ESA”).

Schmidt was one of the scientists hired by SKYDANCE as consultants on the film, and his focus was on aerospace engineering and the “rightness” of living and working in space. We were excited to talk to him, and questions of scientific rigor were at the top of our list.

Schmidt explained that he was on set most days, answering the director’s questions about what everyday life on the ISS was like and helping the actors – who were hooked up to wire installations to simulate microgravity – get to feel more correctly in and around move the ISS. huge practical set.

While keeping details of the film’s alien life plot close to the chest, Schmidt confirmed that the film does indeed revolve around a failed return mission to Mars. For drama’s sake, the movie upgrades the current ISS with a nice extra orbital lab module, without which it wouldn’t be able to perform useful science on a monster return. But the logistics of a true monster return mission aren’t that far out of the realm of possibility.

The trailers show a small example of a return vehicle being captured by the future ISS, but Schmidt said getting that example of a return vehicle back to Earth in real life would be a challenge. “The biggest challenge that still needs to be solved is the launch to Mars, because we’ve never done this before,” Schmidt explains. “Landing, I think… there was a learning curve, but we’re now close to where the chance of success landing on the surface is maybe 80 percent, maybe 85 percent. But we’ve never had a launch from the surface.”

Schmidt continued, outlining the difficulty of getting off Mars. “Number one, there is an atmosphere, which has an aerodynamic impact on the design of the vehicle that takes off… Second, you cannot predict under what conditions the return vehicle will have landed. It can be tilted to the left – it can be tilted in any direction. And the vehicle must be able to compensate for this misalignment of imperfect orientation during takeoff, because it must achieve a very specific orbit to return to Earth. If it doesn’t achieve a perfect job, it’s a disaster.”

Schmidt noted that all of these problems can be solved, but they are all unknown today.

Next up was space medicine expert Dr. Kevin Fong (who can also be seen in the exclusive clip-up at the top of the page). Fong is a bit of a medical renaissance man – a London anesthesiologist who moonlights in helicopters as an emergency physician and who spent a decade training in space medicine at the Johnson Space Center in Houston. Of LIFEFong faced a particularly thorny challenge: balancing the conflicting goals of realism and entertainment.

One of the first things I wanted to ask him about was a trailer shot of an astronaut exercising on a treadmill that vaguely resembled the ISS’s real T2 treadmill. Had he asked that shot be added for the sake of realism, or had the filmmakers thrown it in themselves?

“No actually!” he laughed. “They sort of figured out those exercise sequences already… to me it was pretty impressive to see how thoroughly they had researched the basics of that. So that stuff is already in place, really. We’ve talked much more closely about what the effects are [of microgravity] were on the human body, and from my perspective… it’s not true, which is that this one expedition environment, and it is an expedition environment in the same way as hiking to the South Pole, or climbing Everest, or walking in a desert.”

“And by that,” he continued, “I mean that despite all the pretty pictures, this is a place that’s the same as all those extreme environments. If you go there, you can’t go there indefinitely, and if you go there, there’s a punishment for your physiology and biology. (Despite this, Ryan Reynolds still manages to look superhumanly attractive in microgravity.)

Fong echoed something I heard from Schmidt: He was also on the set during filming, and he, too, was impressed with the care taken to accurately recreate the kinematics of and human responses to microgravity. There was a motion coach on set who had extensively studied films of astronauts in orbit, but Fong brought to the filmmakers’ attention the most remarkable “zero g” films ever filmed: Skylab astronauts Al Bean, Pete Conrad and others running and spinning in the front dome of the Skylab space station. Although it had less than half the internal volume of the International Space Station, Skylab had huge open internal spaces – much larger than anything on the ISS. This allowed astronauts to perform fantastic tricks and zero-g acrobatics (that’s Al Bean spinning like a gymnast). Fong made sure to include these films in the training materials for LIFE.

But human biology isn’t the main focus of the movie – this is a movie about extraterrestrial life. Mars gets all the press, of course, but is it really the number one place in our solar system to look for extraterrestrial life? What about Europa, or Enceladus, or Titan?

Here Fong and Schmidt both essentially had the same answer. While the Jovian and Saturnian moons tease with hints of potential life, Mars has one decisive advantage: it’s so close that it really would be possible to send humans there with technology no different from what we have at our disposal today. It is – budgetary considerations aside – a reasonably close and convenient destination. Mounting a manned expedition to Saturn or Jupiter has long been a staple of science fiction, but for now it remains just that.

Like what friendly of the life that might exist on Mars, both Schmidt and Fong believe that Mars’ warm and wet past could have been enough to give rise to life of an unknown degree of complexity. However, if anything today, the odds point to it being extremely simple, extremophile (at least as we’d define the term when it comes to Earth), and probably underground.

That’s a far cry from the creepy tentacled monster in the trailers, but hey, it’s just a movie. At least for now.

LIFE starring Rebecca Ferguson, Jake Gyllenhaal and Ryan Reynolds. It is produced by SKYDANCE, distributed by Columbia Pictures, and will hit theaters March 24. We expect to be able to review the film shortly before release.