Life, but not as we know it | Techilink 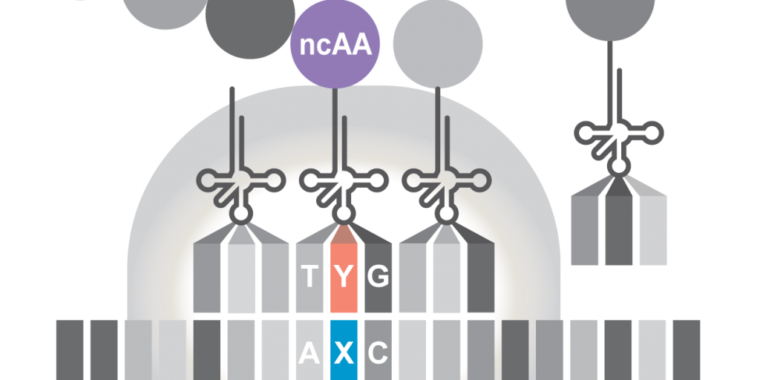 As far as we can tell, everything on Earth has some common features. It encodes information into DNA using four bases, A, T, C, and G. Sets of three consecutive bases are used to code for a single amino acid, and most organisms use a set of 20 amino acids to build proteins. These features are found everywhere from plants and animals to bacteria and viruses, suggesting they appeared in the last common ancestor of life on Earth.

This raises a question common in evolutionary studies: Are these features used because they are somehow efficient, or have we gotten stuck with them as a result of some historical accident?

A team of California-based researchers has built an argument that it’s an accident. And it does this by extending life beyond the limitations it inherited from its common ancestor. Having expanded the genetic alphabet to six letters, the team has now developed a strain of bacteria that uses the extra letters to insert an unnatural amino acid into proteins.

The four bases in DNA are chemicals with a specific structure: flat rings containing nitrogen and oxygen atoms that can participate in hydrogen bonding. They form a specific number of bonds that allow them to pair: A forms two with T, while G forms three with C. These bonds hold the DNA double helix together, but they also allow DNA to be transcribed into RNA , which is a similar set of four bases (with T replaced by its close cousin U). And RNA uses this base pair to match sets of three bases to encode a specific amino acid.

Sets of three bases can code for 64 (4 x 4 x 4) possible entries, but there are only 20 amino acids. So there is already room for some flexibility in terms of changing the genetic code. Unfortunately, all of life uses all of those original 64 possible combinations to mean something else. So changing its meaning would require redesigning the entire genome of the organism.

Some Scripps researchers, working with a biotech company, decided to simply expand the possibilities by adding two more bases that can communicate with each other, but not with any of the four existing bases. To make sure it works, they completely removed the hydrogen bond; instead, the new bases interact through hydrophobic contacts — they stick together because neither interacts well with the aqueous environment around them.

It’s easy to draw the structures of the bases and see how they fit into DNA. And it is possible to show that they work in a test tube. But getting them to work in an organism is quite another matter.

Cells don’t make these artificial bases and there are no enzymes that can do that. The researchers must therefore provide them. But they are needed in cells, which means they have to cross the membrane. It took the authors some digging to find a protein that would take them across. Given all that, and the fact that there’s already some DNA with the artificial bases in there, bacterial cells would continue to use them.

Getting these new bases to be used as part of the genetic code is another, much more complicated matter. The three-base genetic code is translated using RNA, so the researchers also had to provide cells with an RNA version of the bases. The translation involves small transfer RNAs (tRNAs), which match the three base code and are chemically linked to an amino acid. So a tRNA gene had to be supplied with one of the artificial bases. Finally, there had to be an enzyme that chemically linked an amino acid to this tRNA.

To start with, the team decided to work with one of the amino acids the cell already uses. This ensured that it already had the enzymes needed to link an amino acid to the tRNA – all they had to do was add a tRNA gene with an artificial base. Once they did, the cell would take care of the rest.

To make sure this worked, the team also engineered a gene that codes for a fluorescent protein so that it also had an artificial amino acid in the middle. In normal cells that haven’t been manipulated, the cell can’t handle this, and the gene can’t be translated into protein, so the cells won’t glow. But add their engineered tRNA, and the cells can make the protein and glow green. So the system works.

But it works in the sense that it just mimics what biology already does. Part of the purpose of this work is to get biology to do something new.

The researchers then used a rare species that uses a 21st amino acid (N6-[(2-propynyloxy)carbonyl]-l-lysine, because you asked). It has the enzymes to attach that amino acid to a tRNA. So the researchers took the gene for that enzyme and the gene for the tRNA, and they modified the tRNA to include an artificial base. When engineered into bacteria, this combination led them to put this foreign amino acid into the fluorescent protein, which allowed the cells to glow green again.

The important thing here is that this system collectively takes life where it’s never been before (at least since everything on Earth had a common ancestor). The bases used had never been in a living organism before this work. And they are used to encode an amino acid used by only a handful of species in a completely separate domain of life. In doing so, the researchers took a genetic code that has 64 possible states and expanded it to a code with 216.

There are many implications for this work, so it’s worth taking the time to read through them. To begin with, it really implies that the choice of chemistry in life is limited by a historical accident. Yes, everything about life requires nucleic acid and amino acids. But there’s apparently a lot of flexibility when it comes to what those nucleic acids and amino acids look like. Logical, since the enzymes that make proteins already have to deal with 20 very different amino acids.

This also means that we have a lot of flexibility if we want organisms to use different amino acids. Enzymes can do a lot of remarkable things given their relatively simple chemistry, but there’s certainly the potential to extend that – enzymes with phosphorus or boron in their structure, or metals chemically trapped in a catalytic site. It opens up a whole world of chemistry, one that could see enzymes move into areas where they haven’t seen much use.

The appeal of updating the chemistry of life has been so strong that there is a group that is systematically editing a bacterial genome to release a single three-base code for use with an artificial amino acid. The technique shown here is much more powerful, as it opens over 150 new three-base codes. Which means we could potentially use multiple artificial amino acids in one protein.

Which brings us to the limitations of the technique. Since these artificial nucleic acids and amino acids are not part of life’s repertoire, no living organism knows how to make them. That means they have to be supplied and there has to be a way to import them into a cell. For the artificial amino acids, this means there must be a way to specifically link them to a tRNA for use, which means modifying an existing enzyme until it works with something new. That won’t be easy.

But the most important thing about making this work in living organisms is that it opens up an incredibly powerful tool for use: evolution. If we can make an organism’s survival dependent on our own poor implementation of some artificial chemistry, then a few hundred generations – that is, less than a week – will probably give us a finely tuned system.