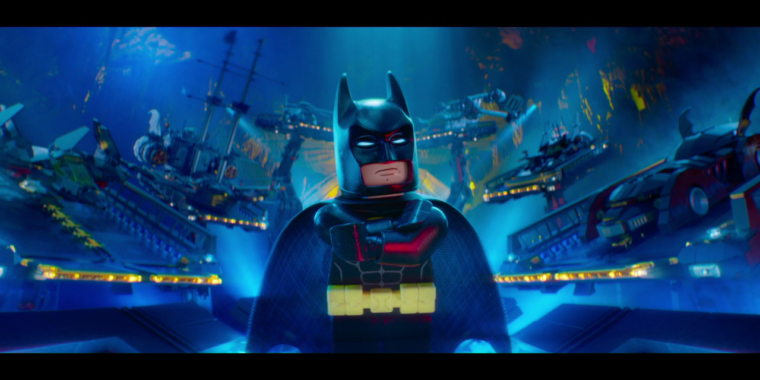 Almost a decade has passed since Gotham’s greatest superhero reached its peak The Dark Knight, and every major Batman movie since has ranged from useful to tragic. Now’s a good time for a shot in Gotham’s arm. Could a crazier, ironic take on the creepy old Batman do the trick?

Enter the Lego franchise, encouraged by the surprise ensemble hit of 2014, The Lego movie, to make Batman the star of his latest spin-off film. This works both for and against the end result. Lego Batman does indeed bring the comic book series back to fun and watchability in movie form, but anyone hoping for Adam West levels of Batman camp will want to cool their bat heels. More importantly, the new movie is also a huge reminder of what a perfect storm The Lego movie turned out to be — and how hard it is to make cinematic lightning strike twice.

Batman just doesn’t love you that much

Will Arnett’s version of Batman comes back from The Lego movie, and he opens the movie that saves the day of The Joker (Zach Galifinakis), who has recruited pretty much every Lego Gotham villain you can think of to bomb Gotham City. The famous (Two-Face, The Penguin), the lesser known (Clayface, Killer Croc), and even the wait-are-these-real ones (The Eraser, Polka Dot Man) are all here.

This wild opening sequence, complete with a funny sarcastic setup for how the bad guys launch their plot, exploits the movie’s Lego-esque potential, then yanks it away almost immediately. This cacophony of villains seems like the perfect thing for an over the top, cheap version of Batman, with the silly minifig versions of the villains jumping around playing pranks and screams. (Clayface’s Lego transformation, in particular, is a visual treat, consisting of a towering swarm of swirling, ill-fitting pieces.) But within minutes, that cast of villains is pushed off the film’s figurative gaming table, and we’re zoomed in on a conflict. Which Lego Batman focuses, for most of the film, on the Joker’s burning desire for Batman to care about their adversarial relationship.

“You never said you hate me!” Joker pines. Batman takes the opportunity to reply, saying this is a relationship he can live without. (Batman just doesn’t like you that much, man.) This post will probably seem more fun to anyone unfamiliar with The killer jokean Alan Moore graphic novel featuring essentially the same (albeit much darker) languid Joker motif that received its own direct-to-video adaptation last year.

But it’s not just that this prank has been done before. Galifinakis as a Joker cannot choose between the diabolical gaiety of a Mark Hamill or the neurosis of Galifinakis’ own stand-up material. He is neither pleasantly disturbed nor amusingly inclined to the usual Joker tropes. The result is one of the flatter cartoon villain performances in recent memory, and certainly a far cry from Will Ferrell’s crazy turn in 2014’s Lego Movie.

The film’s momentum is somewhat spared by Arnett, whose cheeseball, overconfident take on Batman carries over from his last attempt at the role. For the uninitiated, other than not killing people and being a wealthy orphan, this Batman has virtually nothing in common with any other version of the hero. He likes to announce himself as a hero, brag about his abs and brag that he’s the only man with good ideas. For all his chugging boobs, enhanced by a lengthy opening rock song sung by Arnett (with plenty of brutal “after-after-after-after-Batman” moments), this Batman is a total loner. He cooks his own dinners in the microwave, watches only romantic comedies and sits in a regal Wayne Manor in a bathrobe with his bat helmet still on.

Alfred tries not to remind Batman of pride before the fall, which at least puts the caped crusader in the interesting place of being his own villain. After nearly trapping the Joker in the opening encounter, someone else manages to do so: new Commissioner Barbara Gordon. Arnett’s arrogant, pompous Batman is only interested in the justice he delivers, so he spends the rest of the film plotting to free – and certainly successfully recapture – the Joker.

Cera is great, but the rest…

How many movies are we going to get where producers and writers assumed the political climate of 2017 would be, well, different? Lego Batman certainly looks like it. Arnett’s opening track is full of the kind of bragging rights and bravado that eventually became the center of American politics, especially one about fiddling one’s way to pay taxes. More creepy is how the Joker ends up tricking the pompous Batman into doing his own nefarious bids, while Batman thinks this plot and its many machinations are all his own idea. (Sounds familiar?)

Because the film doesn’t have a strong, supporting cast, Arnett’s roars and bravado can thin out towards the end of the film. In any case, Michael Cera’s portrayal of Robin provides the naive, clear-eyed and kindly spoken foil that Arnett desperately needs halfway through the film (and it’s probably Cera’s best feature film in years). The only part of the production that rivals Cera is the visual design of the film, which is arguably the only part of the film that really aligns with The Lego movie. Each new scene is packed with towering Lego constructs, some of which Batman assembles on-the-fly as a “power builder,” and the 3D animation team relishes the opportunity to flash crazy Lego comic constructs. (The Batcave is full of ridiculous vehicles, such as the Bat Kayak and Bat Steam Engine Train.)

Compared to less Batman movies, Lego Batman hits enough good notes to be worth checking out, especially as the first “kid friendly” Batman in a while. Little ones will love reminiscing about Batman’s “swollen” boasting and Robin’s acrobatic enthusiasm, while the action sequences blow away the Lego movies straight to video. If that’s your point of comparison, you’re done here: You’ve got a solid movie to take the kids to.

The Lego movie however, is a more difficult shade to hide behind. The film clearly wants to stand tall with its older sibling, with glimpses of that film’s sense of humor and quick, ironic jokes, especially in Lego Batmanfun first few minutes. But the writers and ensemble cast just can’t keep up. Chris Pratt was a much nicer hero to both advocate for and cut back on than Arnett. Rosario Dawson is cut off at the knees by a shockingly flat character to portray – and is saddled with having to tell viewers again and again the moral code that Batman possibly comes behind. Not even Ralph Fiennes can redeem this nondescript version of famed caretaker Alfred, whose paternalistic demeanor instead plays like a corny stepfather.

Don’t expect a few short bits of DC fan service and wacky, 60’s TV Batman callbacks to make up for this. The film is well over 30 minutes too long, with Batman’s proud plot dominating the pace and almost killing it; why the directors of this movie didn’t fill that time with more DC heroes in amusing ways instead is beyond me (and don’t get me started on the disappointing “super-villain” group it turns out in the end).