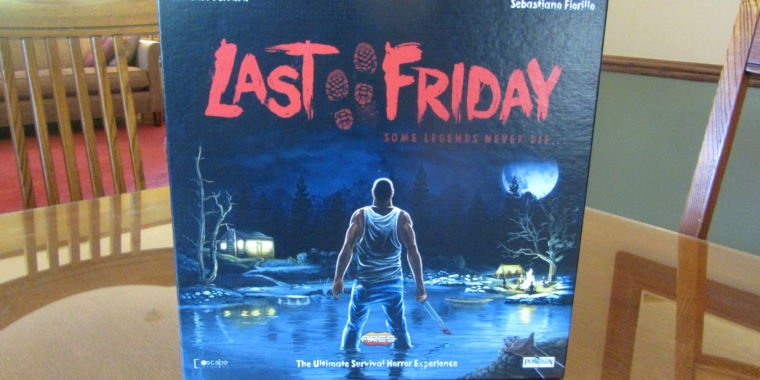 A machete-wielding maniac stalks Camp Apache. He is back from the dead. He’s already killed the camp owners. And he’s after the young counselors who just arrived on the bus.

Welcome to Last Friday, the Ares board game that puts players in the plot of an 80s slasher movie. While one player controls the maniac, everyone else (from 1-5 other players) controls the five camp counselors. Over four “chapters”, the counselors must flee the maniac (chapter one), then chase him in the daylight (chapter two), then protect their “destined” colleague from the maniac’s vengeance (chapter three), all so that the destined can finally kill the maniac for good (chapter four). However, the maniac has other plans – most involving machete slaying – and he can win the game early by taking out enough counselors.

It sounds gruesome, but the game’s art direction is bright and campy rather than really gory. Thanks to its unusual theme and nostalgic factor for gamers of a certain age, Last Friday had a constant line of people waiting for demos at last year’s Gen Con gaming festival. But those people only played the first of the game’s four phases. How does the complete experience of four chapters score?

Hidden movement games have a long history, starting with the 80s classic Scotland Yard and refining the formula with more modern variations such as Specter Ops and Jack-the-Ripper theme Letters from Whitechapel. Last Friday carry on the tradition with a board that looks and works like Letters from Whitechapel. The colorful area of ​​Camp Apache is covered with trails, and those trails have small white dots and larger numbered circles. In turn, the maniac moves between the numbered circles, which are often further apart than the dots, while campers move on the white dots. If one side moves “over” a member of the other side, death will follow.

Here’s the trick, though: the maniac can’t be seen. The counselors have pawns that remain visible on the board throughout the game, while the maniac records his moves on a sheet of paper behind a screen. Depending on the chapter being played, he will have to reveal his location every three rounds, after which he will again operate stealth.

The goals of this movement differ per chapter. In chapter one, the counselors simply need to find the hidden keys to the camp’s huts and get there to safety before the maniac can find and kill them. In chapter two, enhanced by the daylight, the campers turn on the maniac and chase him through the camp; one of them becomes the Destiny, whose True and Ultimate Destiny is to stop the undead maniac threat for good. In chapter three, the situation shifts again, and the campers must all protect the Predestinated from the maniac’s wrath, sacrificing themselves if necessary to slow down the killer. In chapter four, the campers can block the maniac one more time, but it’s the Destiny who ultimately has to find and kill him.

A full game means you have to go through all four chapters, which can take 30-45 minutes per chapter. This can be a long game (although rule variations are included for playing a particular chapter as a standalone game.)

Simple, right? Kind of. The unusual four-part game structure has several genre-bending implications. It allows both sides to “hide” and “chase” in different parts of the game. Hidden movement games usually keep players in one role throughout the game, and it is usually the hidden player who is on the run. It’s all different here.

Death is also different. While catching a camper or the maniac can be satisfying and leads to some in-game bonuses, it’s not paramount in most cases. A camper who died in chapter one is replaced by a new arrival in chapter two. Can you catch the maniac in chapter two? He’s not gone; you just move on to chapter three. The game still has suspense, but the structural choices made to give it a four-part narrative certainly lessen the sense of pressure. In most chapters, the “plot” is only furthered by doing the one thing that would put an end to other hidden movement games.

The “purity” of straightforward chase titles such as: Scotland Yard is instead turned into something much more complex. Both the maniac and counselors can acquire sets of bonus tokens, some of which vary by chapter, while counselors each have a unique ability. This is not a game to just drop on the table and start playing; understanding how all the bonuses work, who starts with which starting items and how characters get more in each chapter is crucial. Likewise, it is necessary to understand the structure of all four chapters for maximum strategy. (All huts opened in chapter one will remain lit and open to the campers throughout the game, while unopened huts can be smashed into by the maniac later and connected through underground tunnels.) difficult questions to solve, but there are many for what, remember, a game about running around a camp with a murderous maniac on your trail. (The manual, which you can download here, is a whopping 16 pages.)

Whether this kind of back-and-forth, hide-and-seek experience is what you want depends on personal preference. Our gaming group found the experience a little too “complicated” for its own good. Nothing spoils the fun faster than a series of low questions about how exactly one places lanterns or whether the maniac reveals his current or three turns ago location or which camper has which key or how the boat token works or whether the maniac can use the “invisible” power during chapter one (no) or what the goals are for each chapter or how “terror” and “rescue points” are calculated at the end of each round.

And something just doesn’t seem right when large parts of the game have extremely limited effects. Thus, whether or not catching the maniac in chapter two feels almost superfluous. While this may keep an extra bonus out of the maniac’s hands, this hardly seems like an appropriate reward for half an hour chasing a killer around a lake. Anyway, the game continues.

The production looks great, especially the huge and beautiful Camp Apache board. But while I wanted to love the game, I couldn’t quite get there. It’s hard not to escape the feeling that with a modified ruleset and a shorter, more tense playtime, the existing material in the box could provide the game I really wanted. As it is, the game is passable but flawed.

If you’re looking for a more streamlined hunt-and-hide experience, I recommend something like the original Scotland Yard or Specter Ops. If you want more length and complexity, but more suspense, go with Letters from Whitechapel.

But if you’re intrigued by the four chapters, back and forth tug-of-war structure of Last Friday, and if you don’t mind more rules and longer playing time, this is definitely worth a try. Gameplay and theme are unique, the art direction is great and you finally have the chance to play the knife-wielding maniac of your nightmares. That is certainly worth something!