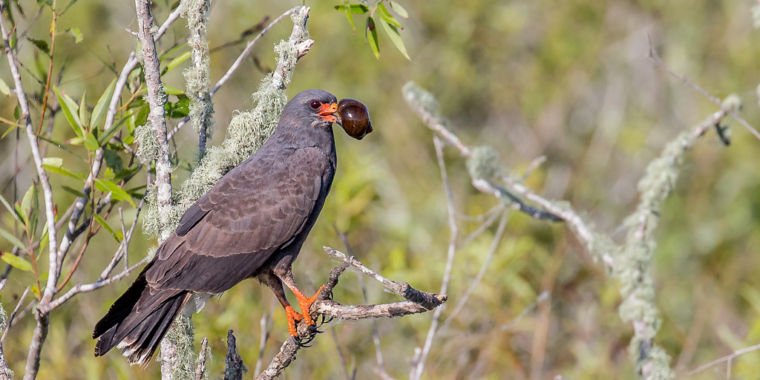 The term “Anthropocene” was coined to denote humanity’s recent and indelible impact on the Earth. But it’s not just geology and climate that we’ve changed; our shuffling of species around the world has messed up many ecosystems. It has been shown that the invasive species we import change rapidly when they enter new territory, but how native species respond to these invaders is not as well documented.

Central Florida is home to an endangered bird called the snail kite, which, as the name implies, prefers to feed on apple snails. The size and shape of the kites’ curved beaks have been modified to be perfect for plucking the snails from their shells. These native snails are about an inch in diameter. By about 2009, exotic snails — “considered one of the world’s worst invaders,” according to a new study of this particular predation — had taken over. They are about three times the size of the native snails.

Using a combination of demographics and genetic analyzes of the birds, researchers have found that the new, larger snails eventually faced larger birds with bigger bills. The birds’ body weight increased and the length of their beaks increased – just the change needed to cope with the larger prey. Not only did beak size increase, it actually increased in proportion to body size, so even though the birds are larger, they still have more pronounced beaks.

And the changes have clearly helped. These larger birds with larger bills were more likely to survive their first year of life than their smaller, runtier siblings.

The scientists did not look at the alleles responsible for beak length. Still, they concluded that it’s not pure evolution that produces this change, but rather something called “phenotypic plasticity.” That is the ability of a single genetic sequence to produce different outcomes depending on variations in the environment.

Phenotypic plasticity mainly responds to dietary changes, such as the new larger food source the fliers encountered here. The scientists reached this conclusion in part because neither bill length nor body weight seemed to change breeding patterns. Still, these phenotypic changes may herald an evolutionary change in the works.

Conservation strategies often focus on protecting the long-lived apex predators that (a) are photogenic and captivating; and (b) believed to be particularly vulnerable to changes in their environment, as their long lives prevent them from adapting as quickly as their environment.

But if these predators can quickly adapt to the presence of invasive prey, as suggested here, perhaps we should reconsider what exactly we are trying to preserve: the ancient pre-invasion predators? The new custom predators? A mix of both? If we find that a species adapts to invasions, it may be better off without our conservation efforts.