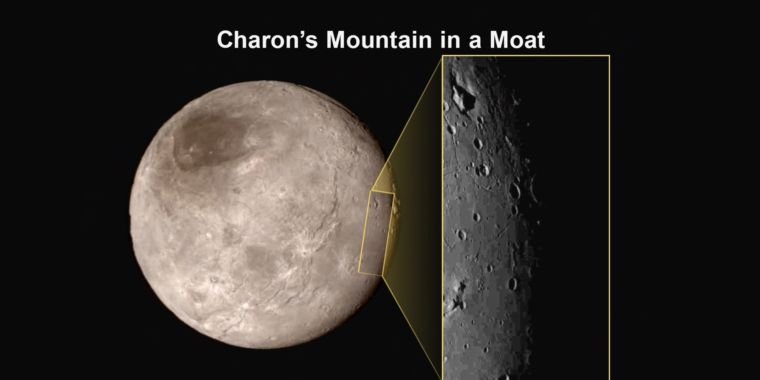 On Wednesday, the International Astronomical Union officially announced the names of objects on Pluto’s moon Charon. The features were revealed as the New Horizons probe shot past Pluto and its five moons, and the names were provided by the public. While astronomers working on the New Horizons data used the nicknames for the time being, the IAU’s announcement makes them formal designations that will be used in all scientific publications about Charon.

While four of Pluto’s moons are so small that New Horizons captured them as pixelated blobs, Charon is very different. And although all moons and their planets orbit a common center of gravity, the difference in size is usually large enough that the center of gravity is within the planet. The Pluto-Charon system is the big exception, as the size difference between the two is small enough that Pluto orbits a point outside the radius of the dwarf planet. That makes Charon one of the largest bodies among the icy worlds of the Kuiper Belt, and it’s the second largest body we’ve looked at in detail.

While Charon doesn’t appear to be as dynamic as Pluto, it has many notable features, including large peaks, deep fissures and huge craters, as well as a dust cloud of material vaporized from Pluto. In 2015, the public was invited to give these names; the New Horizons team informally took up some of the suggestions, and the IAU made them official. The theme of the names revolves around travel and exploration, often (but not always) with a connection to the underworld or the depths.

The mountains named honored storytellers, including Stanley Kubrick and Arthur C. Clarke, who collaborated on the 2001 movie and book. Octavia Butler was also credited with having Butler Mons named after her.

The canyons of the moon are named after boats. Argo Chasm is named after the boat that gave the Argonauts of myth their name; Mandjet Chasma is one of the boats that carries the Egyptian god Ra through the air. But perhaps the most evocative story is the one behind Caleuche Chasma, which is named after a boat that supposedly prowls the shores of Chile, collecting the dead that sail on the boat forever.

Charon’s craters have picked up names from literature and legends. These include recent explorers such as Nemo from the Jules Verne story, Dorothy from the Wizard of Oz, and Pirx, who was featured in Stanislaw Lem’s writing. Folktales from the Arab world mention Nasreddin Crater, and an ancient Russian epic gives us Sadko Crater; Revati Crater takes its name from the Hindu Mahabharata.

There are plenty of other features to mention, some of which already have names in casual use (looking at you, Mordor Macula), so this should be seen as part of an ongoing process. There’s a chance it’s still going on as New Horizons approaches its next target, a Kuiper Belt object it should reach in 2019.