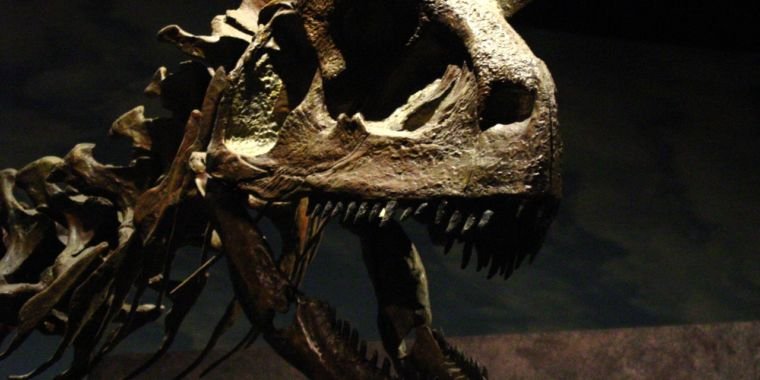 Mass extinctions are not fun times. There is a reason why (usually more than one actually) species are disappearing en masse. Untangling these reasons is a challenge. Investigating the geological crime scene is difficult, as clues can be elusive after millions of years and the events are complex.

The extinction that wiped out (most) dinosaurs, for example, saw both a massive asteroid impact and long-lived volcanic eruptions that covered most of what is now India with lava flows. While the impact would have darkened the sky and caused a permanent winter for several years, the injection of greenhouse gases from the volcanoes into the atmosphere would have caused a rapid swing toward warming as the skies cleared.

However, the record of that warming in the geological record is not very good. The problem has been to find a suitable climate record in rocks deposited quickly enough to represent relatively short periods of time in detail. To obtain such a record, a team led by Kenneth MacLeod of the University of Missouri scratched through rocks in Tunisia in search of crushed bits of fossil fish.

The researchers tick both boxes — good climate record and great detail — by turning to Tunisian rocks with fish bones. The rocks there dating to the end of the Cretaceous mass extinction have been well studied, recording the ages and characteristics of various layers quite accurately. At the time of the extinction, 66 million years ago, the sediments in these rocks were deposited in a shallow ocean in the tropics. Many fossils of critters made of calcium carbonate have changed over time, making them unreliable sources of information. But these fish bits are made of more resilient calcium phosphate.

It’s the oxygen atom in that calcium phosphate that holds the secrets – just like in the H2O from glacial ice or the calcium carbonate from other critters. The ratio of heavier oxygen-18 to lighter oxygen-16 isotopes changes with temperature. So if you go through an ice core, or through a bed of rock, shifts in this isotope ratio mark either warming or cooling.

In this case, the researchers took measurements over 9 meters of rock, spanning about 350,000 years of Earth’s history. At 40 time points, they collected dozens of tiny fish fossil pieces to analyze for oxygen isotopes. The results show a change at the time of the Chicxulub asteroid impact that lasted 100,000 years.

The oxygen isotope ratio shifted by an amount representing water that was about 5°C warmer than it was. After about 100,000 years, temperatures return to roughly where they were before the impact — though the samples here are a little too sparse to say more than that.

You would expect the tropical ocean to warm less than the global average, so this equates to more than 5°C global warming. (By comparison, unlimited greenhouse gas emissions could bring human-induced global warming to about 5°C by the year 2100.) This is consistent with some estimates of projected warming. A 2002 study showing the change in CO. treasure2 of plant fossils, for example, place average global warming in the margin of 7.5°C. The most interesting thing here is seeing evidence of how long that warmer climate lasted — 100,000 years also fits into climate model simulations of this time. So as the world changed in an instant, the misery took its time to leave.

All estimates of the short-term cooling and long-term warming drivers still have fairly large error bars. It’s data like this that helps reduce some of that uncertainty — a small piece of crushed fish fossil at a time.