Kepler data may contain a surprise the size of Neptune, our first exomoon | Techilink 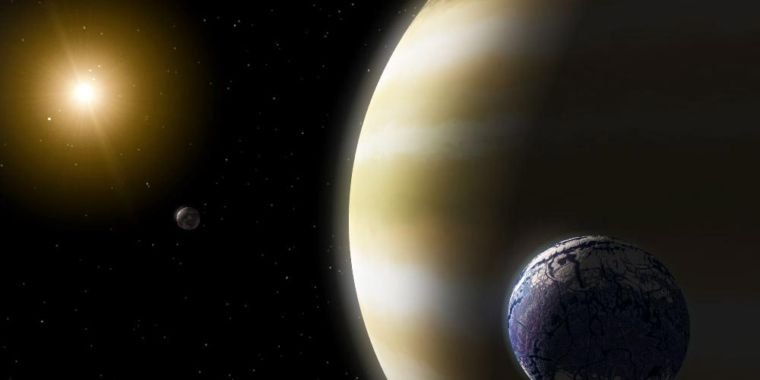 One of the most important things we learned from the Kepler mission is that our solar system is not unique in many ways. Many stars have planets, many have multiple planets, and the list of planets includes many with sizes and densities similar to our eight planets. But there are many details of our own planets, such as the composition and presence of atmospheres, that are much more difficult to investigate at these distances.

One of the features we haven’t gotten to grips with yet is the presence of moons. Most planets of our solar system have them and they seem to be formed by different mechanisms. We would expect them to be common in exosolar systems as well, but we haven’t seen any so far.

A new paper, which takes a detailed look at the computations required to look for an exomoon, makes it clear why: We simply don’t have enough observation time to pick one up in most cases. But the paper also suggests there may be an exception, as the data points to a Neptune-sized exomoon, though the statistics are not yet conclusive.

Find me a moon

Why do we care if there are other moons? First, much of our solar system’s most interesting geology takes place on its moons, which have geysers, atmospheres and volcanoes, plus oceans that provide a possible habitat for life. On the other hand, their formation tells us something about the history of the solar system. Jupiter’s probably formed from a disk of material similar to the solar system itself, while Earth’s moon formed from the debris of a later collision. Neptune’s moon Triton appears to have formed elsewhere and was ultimately captured by the large planet’s gravity. Saturn’s rings appear to condense into a number of small moons that feed back and help form the rings.

These provide many reasons to search for moons elsewhere, but most of our methods of searching for planets will find none directly. Moons are too small for direct imaging, and the planet-moon system will be indistinguishable from a single object when it comes to the gravitational influence on its parent star.

That leaves only two methods, both of which involve watching the light block as the planet and moon travel between their parent star and Earth. The first is looking for variations in the timing of this transit, caused by the moon’s orbit having it either in front of the planet’s orbit, making it pull faster, or behind it, making it slower. However, these transit timing variations will be quite small, and they could also be caused by other planets in the system.

The other way is to look at the amount of light blocked by a planet as it passes in front of its host star. If the moon eclipses the planet or vice versa, then the signal is indistinguishable from the planet itself. But at other times, the moon also blocks some of the star’s light. Depending on where it is in the orbit, this could lead to a small dip in the star’s light before or after the planet creates a larger drop, or it could increase the amount of light blocked as the planet passes.

The problem here is that the signal won’t be the same in two successive orbits, so you need a lot of transits to confirm that the effect is real. Estimates are that data from at least a dozen transits of the planet in front of its parent star are needed to have any chance of detecting the planet’s moon.

A draft paper on identifying exomoons was recently posted to the arXiv. Although it has not yet been peer-reviewed, it gives an idea of ​​how difficult it is to spot a moon given the data we have. That’s because it lays out the full analytical and computational pipeline the team used to search for exomoons.

While a number of exoplanets are so close to their parent stars that we’ve seen a fair number of transits, they’re also unlikely to have moons. That’s because the gravitational interactions at these distances are so complicated that all the moons are likely to have been ejected, especially if there’s more than one planet nearby. Farther from the star, we have data from fewer orbits – not enough to detect the influence of a moon.

To deal with this, the researchers combined data from multiple planets by centering all their transits on a common point. While the process of combining them will eliminate any obvious signal from individual moons, it could give a hint as to whether something unusual is going on somewhere in the population.

But the analysis pipeline was rather complicated: a single step into it took more than 100,000 CPU hours. Because of these limitations, the team was only able to analyze two model exomoon systems: one with a single moon and one with a Jupiter-like system of four large moons. There were also a number of assumptions built in, such as inferring the probable mass of an exoplanet based solely on the amount of light it blocks.

In general, this part of the analysis shows little interest. There are some classes of planets – inhabitants of the habitable zone, those around cold stars, etc. – that are slightly more likely to host a moon than others. But there was no clear evidence that there are exomones. As part of the calculations, the team even showed that it would be impossible to detect Jupiter’s outer large moon, Callisto, during this kind of analysis. So it’s hard to say if moons are rare in the inner parts of exosolar systems (which we would expect to some degree) or if we just don’t have enough data and computational time to find them yet.

The computational approach described above also led the authors to conclude that all transits from each individual planet were centered and stacked. So they ran it through the same analytics pipeline. Even though there weren’t many transits, there was a chance something unusual would stand out – and something did.

That something was the data from KEPLER-1625B, a gas giant orbiting in the habitable zone. A visual examination of the transits reveals something strange is going on, with unusual dips in the star’s light next to the planet’s transit, and a transit that, instead of having a flat bottom, appears to have some deeper parts. to have. The authors test different models of the planet alone and a combination of planet and moon, and they find that the presence of a moon is strongly favored. Its statistical significance, however, is only just above four sigma – a little shy of the five sigma it takes to announce a discovery.

The best fit to the data suggests that KEPLER-1625B is a super-Jupiter, with 10 times the mass of Jupiter. Its moon, meanwhile, is the size of Neptune (Neptune’s mass is only about five percent that of Jupiter). That is, by lunar standards, huge. Models of moon formation indicate that there simply isn’t enough material in the disks that form moons to make something this big, indicating that this was originally a planet that got caught up in super-Jupiter’s gravity. That could have happened when Kepler-1625B migrated inward to reach its current orbit.

The team didn’t plan to say anything about the moon’s possible discovery until after October, when it set aside time on the Hubble Space Telescope to view the next transit for the parent star. But that time proved to be the team’s downfall, as someone tracking requests for time on the Hubble noticed the team’s request, figured out something was up, and shared it on social media.

Of course, it will take the team some time to analyze the Hubble data, so we won’t know for sure until next year. For now, the data is pretty suggestive.