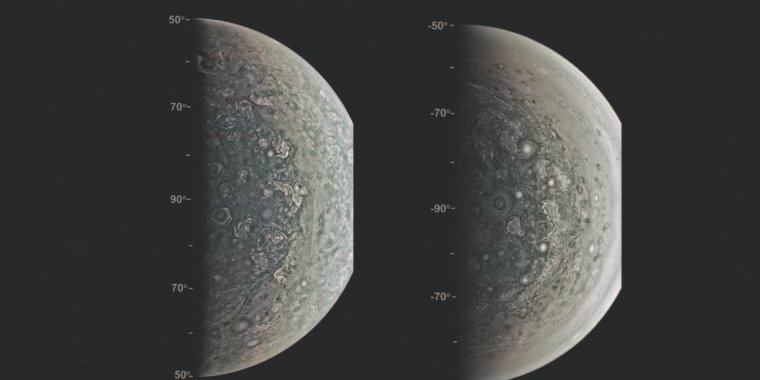 It’s hard to imagine that the largest planet in the solar system, which gave Galileo his first important astronomical observations, still holds many secrets 450 years later. But despite countless hours of peering through telescopes and countless robotic visitors, there’s still a lot we don’t know about Jupiter. Most notably, we didn’t even have a proper view of the planet’s poles, and we have little idea of ​​what the interior might look like.

However, thanks to the arrival of the Juno probe, that is starting to change. After just a few orbits, Juno has imaged both poles, tracked some of the dynamics of the atmosphere, and has begun to provide evidence of what may lie in the crushing depths of the planet’s interior.

Staring at the clouds

Earlier this year, Juno achieved the closest approach to Jupiter ever made by human hardware, passing Jupiter’s cloud tops within 5,000 km. Juno’s highly elliptical orbit also traverses both poles, allowing them to be imaged in greater detail than ever before. And every instrument on the probe managed to capture some data.

The easiest data to interpret comes from the camera, the JunoCam, which captures images in RGBM – the usual RGB plus a methane-sensitive wavelength. The expectation was that we would see something like Saturn’s pole, which has a vortex that sits right on the pole and a strange hexagonal shape in the clouds. Instead, Jupiter’s poles are studies in chaos. The neat streaking pattern of the mid-latitudes gives way to a darker surface dotted with cyclones that we can see rotating in time-lapse images. There are also more diffuse, light-colored regions up to 10,000 km wide that have no defined rotation. And there is no trace of a hexagon.

Microwave imaging hardware also provided the ability to track the temperature of various cloud bands in Jupiter’s mid-latitudes. Previous work has focused on how these belts move so quickly to the east or west of the planet. But the Juno data shows that there is a band near the equator where warm material rises from the planet’s interior and reaches the cloud tops, while a cooler band to the north causes material to return to the depths. The scientists involved in analyzing the data suggest this may be an analog of the Hadley cell found in Earth’s atmosphere, concluding, “The structure is a Hadley cell with no rain.”

An infrared device (the Jovian Infrared Auroral Mapper) has tracked much smaller warm and cold areas scattered through the cloud bands. The hot regions are believed to be areas that have dried out, cooled, and are now descending into Jupiter’s interior. They look hotter simply because the lack of water and ammonia causes more of Jupiter’s internal heat to reach the surface instead of being absorbed.

One of the main goals of the Juno mission is to provide some perspective on Jupiter’s interior. There is an ongoing debate over whether Jupiter’s formation needed a solid core to collect the gas that made it a giant. And we suspect, but don’t know, that hydrogen becomes metallic at the pressure inside the planet, creating a magnetic field that can extend 100 times the radius of the planet.

Juno doesn’t need any special instruments to track Jupiter’s gravitational field; instead, it can be observed accelerating the spacecraft, a change manifested as a Doppler shift in the communications signals. The results from just a few orbits are inconsistent with some of our models of the giant planet’s interior, but still consistent with several others. So we’ll probably have to wait a few more orbits to refine the Juno measurements before we hear much more about Jupiter’s interior.

The magnetic field, on the other hand, has already surprised Juno a bit. The probe’s orbit takes it through the region where Jupiter’s magnetosphere interacts with the solar wind, and it often traverses this region several times with each orbit, due to fluctuations in the strength of the magnetosphere and solar wind. More importantly, Juno is the first spacecraft to measure the magnetic field from the orbit of the moon Io since 1974 (when Pioneer 11 visited it).

Unexpectedly, the magnetic field became much stronger during the closest approach, reaching a strength more than 1.5 times that predicted by models (and an order of magnitude stronger than Earth’s). It is also more variable than expected. This, the team concludes, “presages a dynamo-generating region not far below the surface.” At those levels, hydrogen shouldn’t be metallic; instead it should just be standard H2 molecules. So it is not clear what provides the conductive medium needed to produce magnetism.

With Juno we sent a JEDI to Jupiter. That is the Jupiter Energetic Particle Detector Instrument, which is sensitive to high energy electrons and ions. JEDI tracked energetic electrons falling into Jupiter’s polar regions, where they created aurorae that were picked up by Juno’s UV and visible imaging systems. At its most intense, the authors estimate that every square meter of Jupiter’s atmosphere receives 200 milliwatts of energy from charged particles. But the planet isn’t just a victim of bombing; the instrument also detected streams of electrons sent upward, channeled along Jupiter’s magnetic field lines.

Electrons aren’t the only thing whizzing near the giant planet. The detector hardware separated ions based on mass and charge, and picked up protons, ionized oxygen, and sulfur. The sulfur almost certainly came from Io’s volcanoes. In fact, imaging of the aurorae showed clear features of the orbits of Jupiter’s four largest moons.

Unfortunately, this intense radiation will shorten Juno’s life. And it’s not the only thing; the science teams report that dust grains “impact the spacecraft at a relative velocity of >60 km/s, providing enough kinetic energy to vaporize the grain and some of the target material.” But in just a few orbits, we’ve already gotten a lot of high-resolution data on the giant of our solar system. As long as it survives a few more orbits, it will almost certainly provide planetary scientists with enough data to keep them busy for years to come.