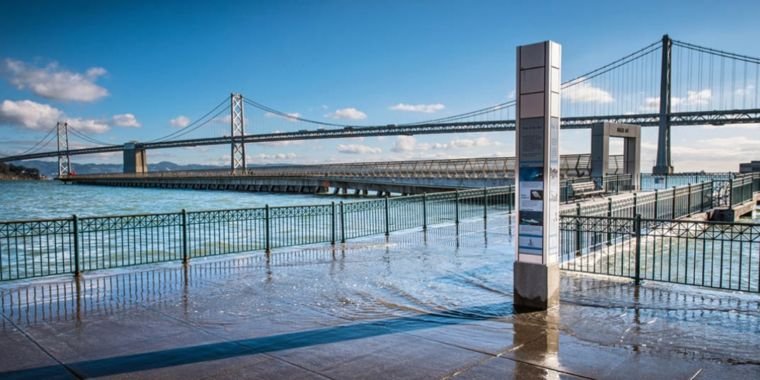 In March, a federal court case led to an unexpected spectacle: a “tutorial” on climate science at the request of the judge. Oakland and San Francisco had filed suit against several oil companies, claiming they should help pay for the effects of sea level rise for deliberately misleading the public about global warming. Judge William Alsup apparently wanted to make sure he understood the physics and chemistry of the situation before weighing legal standards.

On Monday, Alsup granted the defendants’ request to drop the case — a blow to Oakland, San Francisco and other cities monitoring the outcome. “The problem is not about the science,” Alsup writes in his decision, “All parties agree that fossil fuels have led to global warming and ocean rise and will continue to do so.”

Instead, the decision revolves around legal precedents and Alsup’s reluctance to go beyond what he sees as the role of the judiciary.

The cities brought their cases on the basis of public nuisance, alleging that the actions of the oil companies had violated a public right. Previous cases have shown that nuisance cases cannot be brought against greenhouse gas emitters because the EPA has been tasked with regulating the effects of these emissions. If the EPA’s regulations (or lack thereof) don’t protect you, your beef is with the desk instead of the broadcaster. The cities tried to get around this in a number of ways. First they focused on the oil companies for: sale fossil fuels instead of burning them. And second, they argued that the companies were selling fossil fuels internationally (and wherever they are burned, the consequences are global), taking the ball out of EPA’s court.

Although Judge Alsup agreed to let the case proceed along those lines, he found the nuisance claim problematic. Nuisance standards require that the acts be ‘unreasonable’, distinguishing fundamentally harmful things from useful activities with unintended consequences.

Since the use of energy from fossil fuels has clearly delivered both benefits and harms, Alsup felt that this necessitated a balancing of advantages and disadvantages – a tricky calculation. “Having reaped the benefits of that historic progress,” the decision reads, “it would be really fair now to ignore our own responsibility in the use of fossil fuels and put the blame for global warming on those who delivered what we demanded? In light of those benefits, is it really fair to say that the sale of fossil fuels was unreasonable?”

Alsup doesn’t answer those questions, but explains that they are more appropriate for Congress than in a courtroom. And that is ultimately the gist of the decision. Alsup cites a precedent for courts not opening new legal avenues, deferring to the other branches of government. In this case, a ruling against the oil companies would clearly expose them (and perhaps any other company involved in the sale of fuel) to a torrent of liability. The fact that this would have international implications gave Alsup further pause.

The decision concludes: “The dangers raised in the complaints are very real. But those dangers are global. Their causes are worldwide. The benefits of fossil fuels are global. The problem deserves a solution on a larger scale than a subdistrict court judge or jury can offer in a nuisance case.”