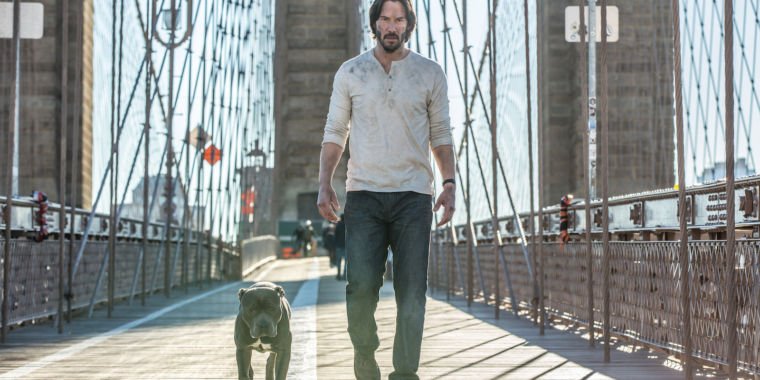 Did you see and like the first one John Wick video from 2014? If so, quickly and urgently close this browser window – X out of the window; close your laptop lid; destroy your tablet with a single, perfectly placed bullet; or even stick a pencil in your smartphone – then use a burner phone to quickly order a ticket for the sequel.

For the rest of you or for those less excited about the first entry in the revenge action series, I’ll do my best to beg you to see this movie without spoiling its damn greatness. John Wick Ch. 2 is a dizzying, enjoyable mess of guns, cars, knives, even more weapons and martial arts, but it’s also an incredible example of how an action film director can position so many different elements – landscape, cast, suspense, pace and cinematography – to achieve excellence in the making movies look so easy.

They’re pulling Wick back in

John Wick, played by Keanu Reeves, opens this sequel with one thing on his mind: to tie a loose end. The original film documented Wick, a retired legendary hit man who returned to his murderous roots after his civilian life was turned upside down by Russian mobsters. That movie also spent quite a bit of time building up Wick’s desire for revenge (and his ability to kill pretty much anything he wants). With that out of the way, Wick 2 wastes no time stepping on the action accelerator with his foot.

After completing that earlier quest and enjoying a brief moment of comfort, Wick finds himself in a very different pickle, all thanks to an Italian man named Santino D’Antonio (Riccardo Scamarcio). It turns out that when Wick wanted to retire a few years ago, he asked a pretty shady favor from D’Antonio, and this leaves our hero with one more debt. “I didn’t mean to do this,” D’Antonio insists, but he’s clearly desperate—as evidenced by his rapid shift from casual conversation over espresso to pulling out a grenade launcher.

So Wick embarks on a journey similar to his predecessor, but only in the fact that Wick is on a mission to kill a specific target (and anyone who dares to get in his way). What’s intriguing here is that the feel of this murderous journey is so drastically altered by its motivation: to pay a debt instead of taking revenge. Reeves milks this distinction quite successfully and without necessarily saying that much, as Wick isn’t exactly chatty. His tone, choice of words, and interactions with fellow assassins and other underworld “allies” play out very differently when Wick is driven by something other than blind rage. The distinction adds surprising weight to the procedure.

Nowhere is this more evident than when Wick goes up against another hit man named Cassian (Common). The two clearly have a history, though it remains largely unexplained, and their respectful adversarial relationship is a major highlight in the entire film. Common’s charisma and steely eyes shine in equal parts in this role, and it’s tense and fun to watch him play against Reeves, especially when they want punches but can’t trade. I’m still reeling from their most climactic moment.

Like John Wick for the, Ch. 2 benefits from a great cast, with some familiar characters returning in satisfying ways and others brand new filling some very interesting gaps about Wick’s past as an assassin. (One of these allies, handing Wick a goddamn Kimber .45 ACP, will be particularly satisfying for anyone who has followed Reeves’ career for a long time.) Whether Wick visits a sommelier who happens to stock “vintage” rifles or seeks help from network of underground soldiers, he always seems to run into an actor at the top of his or her game.

A medium-rare ribeye of action

But hey, you’re here for the action.

Wick 2 continues the early film tradition of longer shots, choosing as much as possible to avoid jarring cuts and montages. Once again, director and longtime stunt supervisor Chad Stahelski has incredible action sequences played out with the sole emphasis naturally coming from how fists, feet and bullets fly. Unlike his stunt work in The MatrixStahelski doesn’t use wires or delay tricks to magnify his chaotic scenes.

Think of it this way: John Wick does things in real time that The Matrix‘s Neo had to freeze time to succeed. That was true for the last film, and it’s only gotten more intense this round. I noticed a few fights where the camera was zoomed in tightly on Reeves so I couldn’t see how slowly his enemies were approaching him from the other side of the camera, but I was too mesmerized by his mastery of martial arts and accurate gunfire to concern. Wick has a knack for finding headshots with the greatest of ease – and Stahelski makes sure the camera is pointed so that everything looks perfectly focused and triggered. Reeves also spends much of the film injured, which makes his Rambo-esque invincibility easier to argue for. Somehow he is able to sell that pain while throwing enemies over his shoulders and individually breaking many of their necks and limbs.

A few scenes fall into the ‘open floor, everyone gets shot’ category, but most benefit from dramatic lighting and beautiful framing. Whether ripping through a gothic metal concert in a Roman palace or trying to survive a perilous walk through subway platforms, Wick and his bloody antics are always framed in a succulent way. (Don’t even get me started on the final fight, which plays out like a Euro trash can with violent rewards.)

Wick Ch. 2 is a rare kind of sequel — one that doesn’t make its predecessor obsolete, but answers the question of why the series should continue. As enjoyable as the 2014 movie was, it only feels like an appetizer compared to Ch. 2‘s main course: a medium-rare ribeye. It’s juicy, it’s tender and it’s gory – and it’s a welcome cinematic escape.