It’s time to get excited about “VR cinema”, and SXSW’s bangers are proof |Techilink 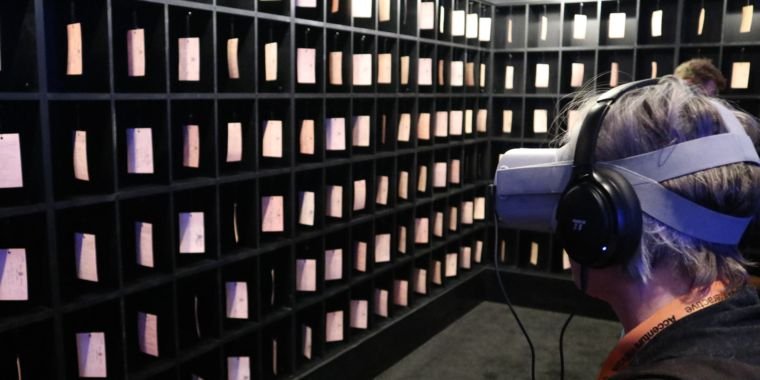 AUSTIN, Texas – You might love, hate, or shrug the idea of ​​virtual reality, but one niche is still unequivocally committed to the format: film festivals. The reasons are not all great.

Since VR usually requires one-for-one kiosks, it invites long lines (which film festivals love for photo-op reasons). These films also favor short 10-15 minute presentations, which are the bread and butter of the indie film world. And the concept smacks of exclusivity – of the feeling that, if you want to see experimental VR fare, you need to go to Sundance, Cannes or SXSW to tie up and trip out.

But – seriously, listen to me – VR filmmaking at its best replicates the experience of live theater in a really accessible way. (I’ve been saying this for years.) You can’t look at something like Hamilton on DVD and expect the same effect. And when a VR movie is well made, with smart technical decisions, it really meets (or sometimes surpasses) the best of Broadway without the need for a flight to New York or a lottery.

This brings me to my favorite thing about this year’s South by Southwest VR Cinema Competition: the best stuff destroyed the whole “inaccessible” thing.

Sure, a few of this year’s features took advantage of a “nicer” computer or headset. But filmmakers are finally tuning into a really cool reality about the immersive power of VR: An artsy eye and clever production is almost always more effective than an expensive, cumbersome rig at answering the question, “Why are you watching this in VR instead of a flat screen?”

I often dislike this format because of the way it wraps a flat screen image around your head like a dome. When I see this, I usually wonder, “Why can’t I watch this on a flat screen?” The stretched visuals often force viewers to tense and turn their heads, usually only to emphasize the VR gimmick of “yowzers, there’s something behind you!”

Metro Veinte: Cita Ciega, an Argentine film about a disabled woman’s blind date, is the best 360-degree film I’ve ever seen, in part because the enveloping images capture the principles of VR. Crucially, the scenes limit their interesting content to a 140-degree focal range, requiring only a little peripheral vision. The scenes organically show viewers that turning around doesn’t pay. Look behind you and you’ll see the windowless corner of a bus seat, a blurry focused field in a park, or the same bedroom background that’s already appeared a few times.

This opening scene provides a rare moment of comfort and quiet satisfaction, but is interrupted by her meddling mother. The rest of the film doubles up on her push-pull relationship with help and kindness, all emphasized with “feet off the camera” sequences in which she resists or dejectedly accepts someone else’s attention.

Fortunately, this is not a painfully slow film. Metro Veintea wisely accentuates the slow-moving scenes by having Juana send texts and audio messages to a close friend. (This is shown in Sherlocklike fashion in the VR field of view.) In a great example, Juana goes back and forth with her boyfriend on a possible date, giving us a sense of story and character as we hang out on a bus for a minute. Shortly afterwards, an elderly passenger says goodbye to Juana compassionately – and there is a feeling that we have to empathize with the feeling of being on a bus with someone in a wheelchair, perhaps feeling uncomfortable or wanting to say something.

But Juana could do without the “polite” banter. “Where are you going?” asks the older woman. “Oh, I’m going to fuck a man,” Juana replies. End of the conversation. But not the end of the moment.

I absolutely accepted this deep-seated experience, having shared that bus with Juana for so long. It’s the same way I chose to sit in the front row on her blind date, or examine all the anti-establishment stickers on her wheelchair, or have her relatives’ faces as close to the camera as they responded to Juana’s sexuality.

In Metro Veintea, intimacy, and combat float comfortably in the lenses of a VR headset, although admittedly the film has two “ugh, I have to stretch my head to see something” moments. And these could be my favorites in the movie because in this I caught myself saying, “Gosh, this is awkward -” and stopped myself. It is a rare case of a good 360-degree gimmick, and Metro VeinteaThe best narrative beats deserve the right to play that card.

gloomy eyes (Oculus Rift, SteamVR) introduces a universe where dangerous zombies roam free and natural light hasn’t shone for years. Through narration and short, cute scenes, the film introduces a few characters: Nina, a sad girl who keeps losing her puppy, but also mysteriously accesses a magical light source; her uncle, a grumpy overseer who wants to bring order to the dark world and eradicate the zombies; and Gloomy, a young zombie boy who cooks in equal parts good and evil.

Its duality hints at a potentially interesting conflict and story. But once the video’s narrative roots are established, they are immediately ripped out with a “to be continued” warning.

I’m looking forward to the final two episodes of the series, which the filmmakers say will run 10 minutes each and will be released “this Halloween” on commercial platforms (Oculus Rift, SteamVR). Meanwhile, every moment in the eight-minute short film plays with shadow and light in an incredible way. Using floodlights is a good idea to focus your VR eyes on only one concentrated point at a time, not a lot of background or behind-the-back scenery.

This focused attention does something dramatic in short: it gives viewers mental permission to lean into each diorama, rendered in real time, to absorb the minute details of the impeccably animated characters and the depth and scope of each miniature stage. to take. A flash of light or a wildly animated shadow causes your eyes to follow the characters to the next set piece, where, again, you can linger long enough to take in the details without sticking your neck out to look in all directions.

The result is a number of moments that I remember well after I stepped out of the demo, including a confrontation between the overseer and his follower in front of a cathedral, bathed in red light; a spooky drive-in movie where the boy character unleashes his demonic potential; and an in-your-face moment when the boy and girl finally share a moment of kindness as he builds a bridge for her and her adorable pup to pass through. The results reminded me of the VR dollhouse effect I got from playing the video game Mossonly this time with a focused story where viewers are sucked into a “spooky cute” universe without having to hold a game controller.

I watched this short more than any other at SXSW because I was captivated by its unique world. The catch: Since this movie has support for leaning in and admiring the smaller details, it needs a more powerful VR rig than Oculus Go or Google Cardboard. Still, the limited detail and focused lighting help scale this experience up to weaker computers, so it still falls under the “accessible VR” umbrella I mentioned earlier.