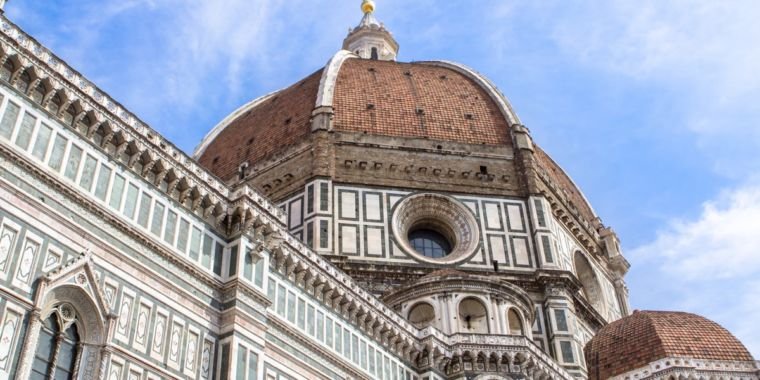 The towering dome atop the Cathedral of St Mary of the Flower rightly dominates Florence’s skyline and has stood for centuries, since Filippo Brunelleschi designed it in the early 15th century. But scientists aren’t sure how this goldsmith with no formal engineering training managed to build it. Brunelleschi built a wood-and-brick model of his plan, but deliberately left out crucial details and left no elaborate blueprints so that his rivals couldn’t steal his secrets.

Elena Guardincerri, a physicist at Los Alamos National Laboratory who grew up in a nearby town in Italy, thinks she can help solve part of the mystery using a subatomic particle called a muon.

Brunelleschi found inspiration for his design in the inverted chain form of the Pantheon, an ideal shape for domes because the innate physical forces can support the structure without the need for support. Robert Hooke put it best in the 17th century: “As the flexible chain hangs, so inverted stands the rigid bow.” A chain that hangs between two points naturally relaxes in a state of pure tension; inverting that warp shape in an arc inverts it into a form of pure compression. Standard building materials such as masonry and concrete would break quite easily under tension, but they can withstand high compressive forces.

The round dome of the Pantheon has a single concrete shell. Brunelleschi’s design required a 150-foot octagonal dome and a height of nearly 300 feet with no flying buttresses for support. He used two shells: a very thick inner shell and a much thinner outer shell. Historians believe he used three pairs of large stone chains (which are still part of the structure) to act somewhat like barrel-shaped hoops, applying enough pressure to hold the stones in place as the mortar set.

The last dome is a spectacular achievement. Almost immediately, however, cracks began to appear in the structure, albeit very slowly moving cracks. “Nobody expects it to fall soon,” Guardincerri said. But a failed restoration effort in the 1980s exacerbated the problem and added a greater sense of urgency to the quest to preserve the dome, one of Florence’s top tourist attractions. However, the lack of detailed information about the internal structure remains a stumbling block.

Preservationists have used many different methods over the years to try to fill their gaps in knowledge. In 1987, 300 different devices were connected to the dome, leading to: The New York Times to declare it the world’s most carefully controlled structure. But the inner shell is so thick that most conventional methods cannot pass through it. In particular, it would be nice to know if the stone chains used to stabilize the dome were reinforced with iron bars, clamps, or more chains to reinforce its structural integrity. That’s where muon imaging should help.

There is a long history of using muons to image archaeological structures, a process made easier by the fact that cosmic rays provide a constant supply of these particles. An engineer named EP George used them in the 1950s to take measurements of an Australian tunnel. But Nobel Prize-winning physicist Luis Alvarez really put muon imaging on the map when he teamed up with Egyptian archaeologists to use the technique to search for hidden chambers in the Pyramid of Khafre in Giza. Although it worked in principle, they found no hidden rooms. Last year, however, scientists used muon imaging to detect a mysterious void in the Great Pyramid of Giza, which could be evidence of a hidden chamber.

There are many variations of muon imaging, but they all mostly involve gas-filled chambers. As muons rustle through the gas, they collide with the gas particles and emit a telltale flash of light, which is registered by the detector so scientists can calculate the particle’s energy and trajectory. It is similar to X-ray imaging or ground-penetrating radar, except with naturally occurring high-energy muons instead of X-rays or radio waves. That higher energy makes it possible to image very thick, dense substances, such as the stones used to build pyramids or the two-meter-thick inner shell of Il Duomo. The closer the object being imaged, the more muons are blocked, casting a telltale shadow. Hidden chambers in a pyramid would appear in the final image because they blocked fewer particles. And if Brunelleschi used iron bars to reinforce his dome, they would appear as dark spots.

The Los Alamos technique for muon tracking was first developed in the early 2000s when Guardincerri was still a graduate student. She originally built her muon detectors to keep the nasty particles from interfering with her efforts to study ghostly neutrinos. When a host of experts on the Florence Cathedral came to a workshop in the lab in 2013, they realized that the same technique could be used to learn more about the materials used to build the dome, except she would have to build two smaller, portable detectors.

A single muon detector works well for scanning large objects such as pyramids or mountains, but there is so much scattering of the muons that you get lower resolution and blurry images. By sandwiching the object of interest between two muon detectors, you get a higher resolution, but it limits the field of view to the part of the object that is between them. That is an acceptable trade-off for portraying Il Duomo.

In the summer of 2015, Guardincerri and her students built a mock-up of the dome’s thick inner shell from radiation-shielding concrete bricks, which have similar properties to the bricks used to build the original, and embedded iron bars of varying thicknesses within it. They placed the muon trackers on either side of the two-meter-thick mock-up wall and recorded 35 days of data. After just 17 days, all three iron bars were clearly visible in the resulting image. When she reported her findings to the cathedral’s guild members, she quickly gained approval to develop a set of muon-tracking modules to install on site.

The two detectors have been completed and Guardincerri is now waiting for employees from the University of Pennsylvania to test the custom electronics to analyze the data, based on technology used in the ATLAS experiment at CERN’s Large Hadron Collider in Switzerland. Once that’s done, both detectors will be sent to other University of Florence employees, who will retest them to make sure nothing was damaged in transit.

Then the detectors are mounted in the dome itself: one presses against the inner wall and the second rests between the two shells, also against the inner wall. The Florence scientists will collect data in that position for a month, then move the detectors two meters higher for another month of data collection, and so on, until the entire dome is imaged. And then we might know once and for all if there are iron reinforcements in the dome. That would be good news for conservationists who are thinking about how to tackle the squatting problem.