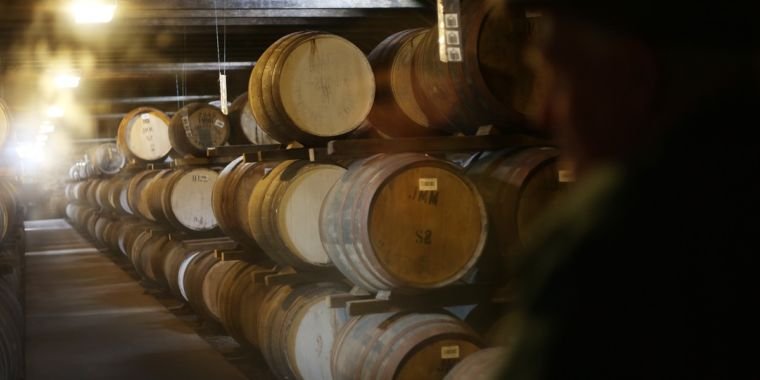 There’s nothing like the pleasure of sipping a fine Scotch whisky, for those whose tastes run to such indulgences. But how can you be sure you’re paying for the real deal and not a cheap counterfeit? Good news: Physicists at the University of St Andrews in Scotland have discovered how to use laser light to test the authenticity of bottles of fine Scotch whiskey without ever having to open the bottles. They described their work in a recent paper published in the journal Analytical Methods.

As we reported last year, there is an exploding demand for expensive rare whiskeys – yes, even in the midst of a global pandemic – so of course there has been a corresponding increase in the number of counterfeit bottles infiltrating the market. A 2018 study radiocarbon dated 55 randomly selected bottles from auctions, private collectors and retailers and found that 21 of them were either outright counterfeits or had not been distilled in the year listed on the label.

Ten of those counterfeits would be single-malt scotches from 1900 or earlier, prompting Rare Whiskey 101 co-founder David Robertson to publicly state: “It is our sincere belief that any alleged pre-1900 bottle should be assumed to be fake until it really has been proven, especially if the bottle claims to be a single malt Scotch whisky.” There’s also an influx of counterfeit, cheaper whiskeys seeping into the markets, which could pose an even greater challenge, though less of one that’s making headlines.

That prompted Alasdair Clark of the University of Glasgow to develop an artificial “tongue” that can distinguish between different brands of whisky. Announced last year, his device consists of two nanometallic “taste buds” — one gold and the other aluminum — placed side by side and arranged in a checkerboard pattern. Each is chemically modified and then monitored to see how the nanometals’ interactions with light change in response to contact with a liquid. With two taste buds on the artificial tongue, they got two different optical profiles of three different whiskeys used in the experiments (Glenfiddich, Glen Marnoch and Laphroaig), while still taking only one measurement.

Clark’s artificial tongue isn’t looking for a specific kind of chemical, though; that’s what makes it a tongue as opposed to a sensor. Human tongues, for example, can distinguish between black coffee and apple juice, not because we feel certain chemicals in either, but because over time we’ve learned to associate a particular flavor profile with each. That’s essentially what Clark’s artificial tongue does. And you still have to open the bottles to test the whiskeys. Whiskey producers and distributors are very interested in methods that would work while leaving the precious bottles unopened.

Whiskeys are remarkably complex chemically, despite the fact that the main ingredients are water and barley (and/or other grains). But how a whiskey (or whiskey) is produced creates a unique chemical signature or fingerprint. That includes the time spent aging in a wooden barrel, which gives the spirit its telltale golden color, not to mention the smoky bouquet. As Allison Gasparini points out on Forbes:

Whiskeys are chemically complex liquids containing thousands of compounds that make up the different colors, aromas and flavors. A detailed understanding of the chemistry of the bottle in front of you can be the difference between knowing for sure a rare Scotch is what the label promises, or detecting a counterfeit.

Scientists are looking for many different techniques to better understand all those chemical compounds. For example, researchers at the University of Tennessee’s Institute of Agriculture have identified many of the key aroma-active compounds responsible for Tennessee whiskey’s distinctive flavor profiles using a combination of two techniques: gas chromatography mass spectrometry and gas chromatography olfactometry. (Freshly made distillate for Tennessee whiskey undergoes an additional filtration step prior to the cask process called the Lincoln County Process, also known as “charcoal leaching.”) They published their full results, characterizing the entire process, earlier this month in the Journal of Agricultural Chemistry. .

Food scientists and chemists are also interested in using spectroscopy to identify the chemical compounds in a whiskey bottle. This means that a laser light shines into a substance, which scatters and refracts the light into a spectrum of wavelengths. The different colors represent different wavelengths of light, which correspond to specific chemical compounds, thus creating a unique “fingerprint” of the fabric. The Scotch Whiskey Research Institute (SWSRI) in Edinburgh, Scotland, is experimenting with a portable spectrometer that is easy to use enough to allow workers to measure trace sugar levels (an important feature for verifying origin) with minimal training, and to distinguish between make between whiskeys based on different chemical properties.

The challenge in applying such techniques to whiskey is that the glass bottles themselves produce a large spectral signal, making it difficult to distinguish the chemical fingerprint in question (that of the ghost within). So spectroscopy is usually performed after whiskeys are removed from the bottle.

That’s the problem Holly Fleming and her colleagues from St Andrews have solved with this latest article. They figured out how to shape the laser light into a ring instead of a focused beam, suppressing the glass’s hissing signal. They used a cone-shaped lens to focus the light ring on the bottle, which in turn refocuses the light into the whiskey inside. So an expensive bottle of rare Scotch whiskey can be tested for authenticity without wasting a single precious drop. Bonus: The same technique can also be used to analyze bottles of gin and vodka. Spirits producers and distributors should be very happy about that.