Is this what the inside of the Nintendo Switch looks like? |Techilink 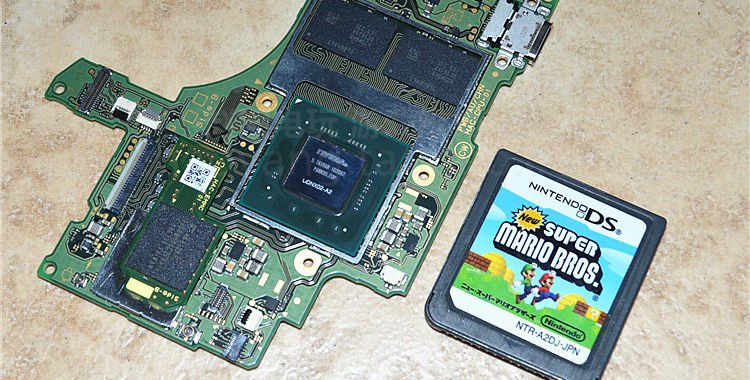 Images of what appears to be a teardown of a Nintendo Switch started circulating the internet on February 19. While it’s impossible at this point to confirm the legitimacy of these images, the hardware depicted appears to have required some notable design and engineering chops. And several design points inspire confidence that these images are from the real thing — or at least a prototype.

The leaked images of this possible Nintendo Switch contain a watermark from a Chinese manufacturer of game components. The device seen here puts component density first, with a lithium-ion battery taking up nearly half the hardware footprint. Nintendo previously confirmed that the Switch’s battery will measure 4310 mAh, and that size is printed on the battery seen in these images (which is also covered in some sort of foam, perhaps intended for both protection and heat management).

Strangely, however, this battery has the supplier’s name written on a visible sticker, which is a change of pace for Nintendo. The company’s 3DS system line has used much sharper labels for its batteries, which also hide their exact manufacturing origins beyond “made in China”. This possible Switch, on the other hand, tapped into Amperex for battery production tasks. If that name sounds familiar to you, then you’ve kept up with the Samsung Note 7 debacle. The lack of an official Nintendo label could be due to it being prototype hardware, or because, unlike the 3DS, the Switch isn’t designed for easy battery replacement.

The images further confirm a hefty fan — about the same size as the Switch’s cartridge slot — along with an L-shaped circuit board that holds, among other things, an Nvidia-manufactured SoC and two possible DIMMs of RAM (with no helpful labels clarifying their size, speed, etc.) or other specifications; based on known specifications, this could be two DIMMs of 2 GB RAM each). Importantly, this teardown shows ribbons at the exact points where the removable Joy-Con controllers would interact with the system when mounted in “portable” mode. A USB Type-C slot on the logic board is positioned to accept the dual task of receiving power and transmitting external video when the switch is placed in a TV stand, and the rest of the components seem pretty good at it. the system to fit thin footprint (the measurements of which are still unconfirmed, except for a diagonal of 6.2 inches on the touchscreen).

If this Nvidia chip is legitimate, the printed code will be interesting, as it contains a code label “UDNX02-A2”. We know the Switch will include a Tegra chip, and we were led to believe it would look a lot like the X1 found in Nvidia’s Shield devices. But this “A2” designation, unlike the “A1” printed on existing X1 chips, could mean we’re getting a major design change.

That could very well be a contraction to a 16nm process, or we could have a surprising bump from the older Maxwell architecture to the newer Pascal. The latter seems rather unlikely, however, based on well-known Switch specs that developers are designing for.

We’re just weeks away from much more extensive Switch teardowns. We’ll be sure to let you know as soon as someone less anonymous voids their warranty and unpacks every Switch part.