Irma and Florida: Confidence in hurricane forecast is growing | Techilink 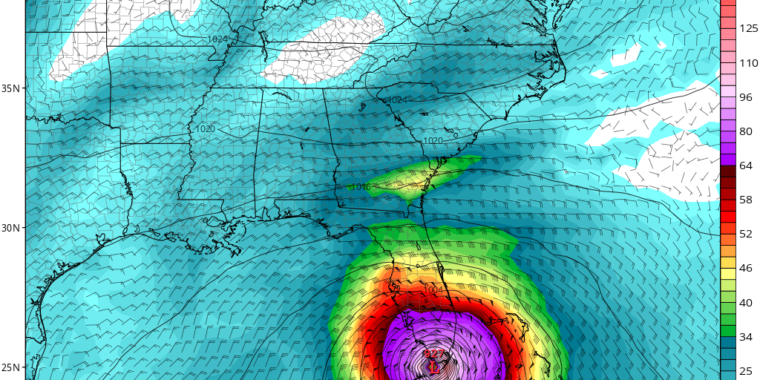 Hurricane Irma continues to move west-northwest toward the Florida Straits at a good speed, about 15 mph. At this rate, the storm will only have about 60 to 72 hours left before reaching the southern coast of Florida, if it does make landfall there. The National Hurricane Center’s updated track forecast for the storm as of 11 a.m. ET is shown below.

The gallery below provides information on the National Hurricane Center’s latest 10 track forecasts (they are updated every six hours), going back to the morning of Tuesday, September 5. At the time, professional forecasters from the Miami-based hurricane center had pushed the storm into the Florida Keys, between South Florida and Cuba, early Sunday morning.

As we get closer to this weekend, the logical question becomes “to what extent can we trust these track predictions?”

The first key in judging the accuracy of a trajectory prediction is to consider the consistency of the predictions. Has the five-day forecast bounced around from, say, Pensacola, Florida to Miami, then to Charleston, South Carolina, and back to Miami? In this case, the answer is definitely no.

Between 5:00 AM ET on Wednesday and 11:00 AM ET Thursday (a total of six forecasts), the official forecast track has moved only slightly from Key Largo to Miami to West Palm Beach and back to Miami. In terms of east-west distance, that’s only a shift of about 30 miles in terms of a Florida “landfall.” That is a very consistent forecast, which gives confidence to the forecast.

In addition, the world’s best forecasting system, the European model, has been pretty consistent as of Wednesday morning about a landfall near the Everglades, Key Largo or Miami. The latest run of the European model (12z, Thursday, published around 2:30 p.m. ET) brings a powerful hurricane into the Florida Keys near Marathon and moves downtown to the Florida peninsula across the Everglades and northward across the state.

The second factor to consider when assessing a forecast is time to landfall. In this case, depending on Irma’s future forward speed, we are probably about 60 to 72 hours away from the storm reaching near Florida. For this kind of time frame, the errors are less than half that of a five-day forecast.

The image below is part of a report produced annually by the National Hurricane Center to assess the performance and that of the computer models it uses. In it, we can see that the average “official forecast” track error of a storm at Irma’s current time from a landfall in Florida is about 75 miles. My hunch is that, due to the consistency in orbital predictions and computer models so far, Irma’s final error is likely to be lower.

But still, with hurricanes, location is very important. For example, if Irma turns north sooner and the storm’s center stays even 30 or more miles off the coast of Miami to the east, it would save the city from catastrophic storm surges and some of the worst winds. Such a move would be the difference between widespread devastation and righteousness For real bad conditions.

Unfortunately, the best forecasters and global models predict that the storm will likely make a final landfall over Miami or, in the case of the European model, west of it. Obviously, this is pretty much a worst-case scenario, so for now we can hope that the computers are wrong. As always, hope for the best and prepare for the worst.

Wondering how the National Hurricane Center forecasters get the latest on what Irma and other hurricanes are doing? Last year we visited the Mighty Hercules, one of the US Air Force’s ‘slayers of hurricanes’. Learn how hurricane hunters stay aloft for 18 hours and fly through winds of 280 km/h to provide new data to meteorologists.