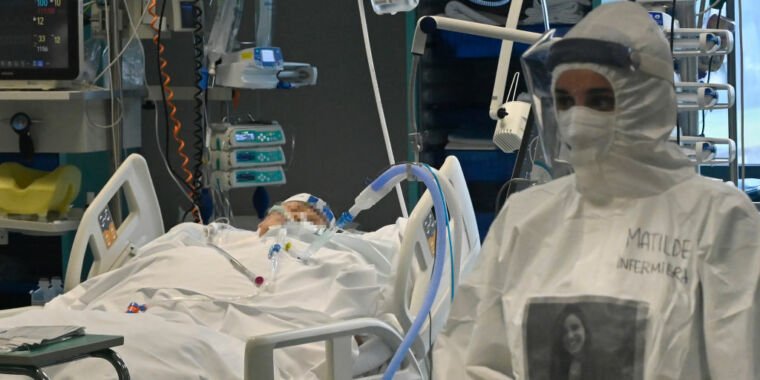 The body’s response to a SARS-CoV-2 infection ranges from undetected to death, raising an obvious question: What makes the difference? If we could identify the factors that make COVID-19 so dangerous for some people, we could do our best to address these factors and provide additional protection for those most at risk. But beyond the obvious – health inequalities linked to poverty and race seem to play a role here as well – we struggled to identify the factors that make a difference.

A recently published study looks at one possible influence: genetics. In a large study of UK COVID-19 patients, researchers have found a number of genes that appear to be linked to severe cases, most of which are involved in immune function. But the results don’t clarify how immune function is linked to disease progression.

Everything in the genes

The work took place in the UK, one of the countries involved in the GenOMICC (Genetics Of Mortality In Critical Care) project, which has already explored the genetics underlying hospitalization for communicable diseases. For the new study, the researchers collaborated with more than 200 intensive care units in the UK to identify study participants. In all, they managed to obtain genetic data from more than 2,700 critical COVID-19 patients. These were compared with people in the UK biobank with similar demographics to obtain a control population. The only weakness of this design is that some people in the Biobank may be susceptible to severe COVID-19 but simply not yet infected, which would tend to weaken any genetic signals.

The research team conducted two analyzes to look for genes associated with severe COVID-19. The first was a standard genome-wide association analysis, which scanned the entire genome for variants that were more common in those with severe disease. The researchers broke out different ethnic groups for this analysis, because informational variants sometimes differ between them. The only group large enough to make a full analysis was people of European descent, limiting the number of cases to 1,676.

Using this group, 15 different locations in the genome were found. However, to revalidate the study, the researchers also alternated in several control groups from other genetic sources. In addition, they used other sources of cases, including 23andMe, which has recorded more than 1,100 cases among its members. These reanalyses eliminated seven of the 15 original genome sites, leaving eight that had been replicated.

The second analysis the team did was looking at the activity of genes, measured by their transcription into RNA copies, an important step in making proteins. The researchers checked for RNA production in the lungs and blood and compared those results with the location of the genetic factors identified in the other part of the study.

In general, the genes that came out of this analysis fall into two groups. One involves genes involved in the initial response to viral infection, part of what’s called the innate immune system. One is the receptor for an immune signaling molecule (interferons) that is induced when cells detect the presence of a virus. Problems with interferon signaling had already been linked to severe COVID-19 cases, so this is an important validation of the work. The other gene that fell into this category is part of a pathway that results in activating an enzyme that chews up double-stranded RNA, the genetic material of some viruses and an important intermediate in the process of producing new coronaviruses.

The other group of genes generally falls on inflammatory immune pathways. One is an enzyme that has several relevant effects, including activating some immune signaling molecules and helping T cells identify infected cells. Another is part of a signaling pathway involved in regulating immune activities (the JAK/STAT pathway). And other variants altered the activity of a collection of receptors for chemokines, important immune signaling molecules.

While it may seem like a “duh” moment to discover that immune system activity is involved in the severity of an infection, the results are both more and less informative than they seem. It’s actually quite interesting that nothing but immune-related genes came out of this screen, suggesting that genetic factors may not play a huge role in how infections progress or which tissues end up being damaged. It’s also informative, since some of the things that came from other screens, like the A/B/O blood type, didn’t come from this one.

But knowing that the immune response is involved doesn’t necessarily tell us what it does. Do serious health problems arise from an anemic immune response that unleashes the virus? Or are they because the immune system goes into overdrive and starts damaging tissues? Given the two groups of genes identified here, it could even be a bit of both: a weak early response, followed by overactive inflammation later in the infection.

Still, identifying genes worthy of further research is an important first step. The progression of COVID-19, with its erratic collection of symptoms, has very variable recovery periods. Figuring out the details where this work could contribute could help us make much more informed treatment decisions.