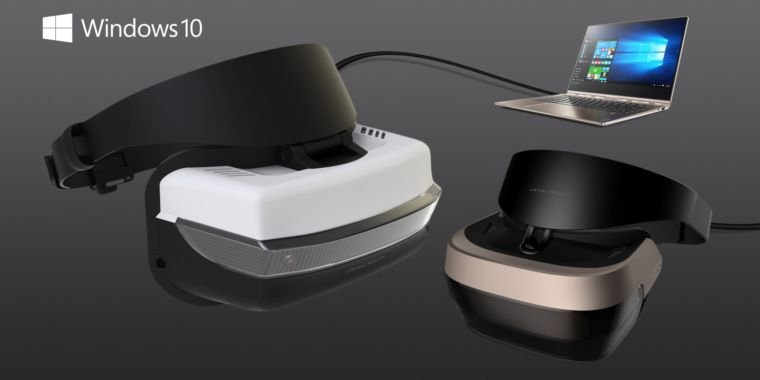 With next year’s Windows 10 Creators Update, Microsoft will integrate 3D capabilities for virtual reality and augmented reality headsets into the standard Windows operating system. In addition, companies such as Lenovo, HP, Dell, Asus and Acer will ship a range of VR headsets starting at just $299.

This will lower the price of PC-based VR, but the headset isn’t the only expense: both the Oculus Rift and HTC Vive have relatively high hardware requirements. In particular, they require relatively fast, discrete GPUs, with the Nvidia GTX 960 (Oculus) or 970 (Vive) listed as minimum requirements. If Valve’s hardware survey of Steam users is anything to review, even many PC gamers will have to upgrade to meet the minimum VR requirements.

Microsoft has not yet published the full hardware requirements for Windows Holographic, but an application included in the latest preview builds, the Windows Holographic First Run app, provides some hints as to what they are. The app is similar to apps that Oculus and Valve have produced for their respective platforms: it checks your system specs to determine if it will be ready for VR systems. Microsoft’s app is a bit vague, but it seems to aim quite low: it requires a four-thread processor (either quad-core or two-core/four-thread), 4 GB of RAM (lower than the 8 GB requirement from Oculus), USB 3, and a certain amount of disk space.

The most notable difference is in the GPU requirement. The Microsoft tool only requires DirectX 12 graphics. Notably, this isn’t a requirement for a discrete GPU: the integrated GPU in Intel processors seems to pass the test (verified with Skylake), and basically anything from Haswell should pass. AMD’s integrated graphics on 6000 series processors or better should also be good enough.

The First Run tool also tells you to clear a few square feet of area to run VR apps, and it tries to establish positional tracking (although, of course, this step fails due to the lack of hardware to deal with). to test). Interestingly, the app says to make sure the device is visible to (presumably external) sensors. The hardware Microsoft promises wouldn’t require external sensors for positional tracking; it is claimed to have motion detection from within and six degrees of freedom, meaning it can detect rotations and translations along all three axes without needing external references. HoloLens can achieve this by taking advantage of the Kinect-like 3D mapping of the room, but neither the Oculus Rift nor the HTC Vive can deliver the same performance. They both need wall mounted sensors to track translations. The implication here is that Windows Holographic will support both styles of headset, depending on what users have available.

Exactly what kind of user experience Microsoft offers is still unknown. Obviously, these specs won’t deliver the same performance as the first-generation headsets, but they could be competitive with VR experiences like the GearVR. To introduce people to VR, that might be good enough.