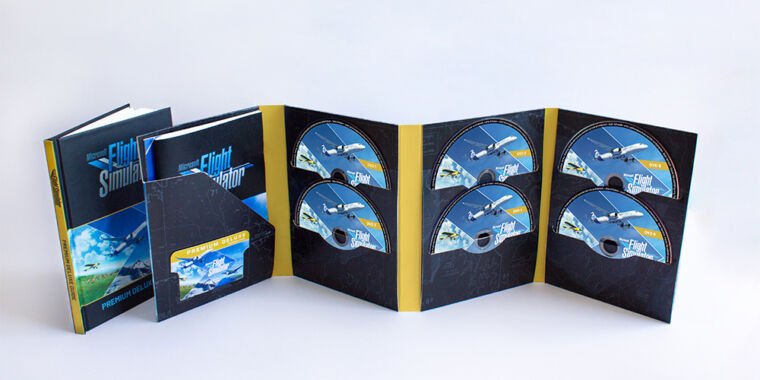 European players who want to play Microsoft’s upcoming Flight Simulator reboot next month will be able to purchase a physical edition of the game spread across a massive ten dual-layered DVDs. The retail package comes courtesy of the simulation add-on specialists at Aerosoft, who announced its publishing partnership with Microsoft and developer Asobo earlier this week.

That physical package, which Aerosoft says should cost “very close to the price you pay Microsoft” [for the digital edition]will hold over 90GB of data, most of which will be graphics resources for the planes and detailed ground landscapes in the game. After installing the game from those discs, players are still encouraged to download update files to the simulation itself, as well as stream abundant cloud-based data such as high-resolution satellite photos, geographic details and live weather updates for an even higher level of realism.

“This is very much a simulator that relies on the cloud if you want to take full advantage of it,” Aerosoft’s community manager Mathijs Kok wrote in a forum thread discussing the physical edition. “If you use the sim offline, you get a world that looks like a lot better than [Prepar3d] or X-Planebut you’ll miss full high-def coverage of the world with a photo base and all that goes with it (correctly placed trees, etc.),” ​​he added later.

Including all that streamable data in a physical package “would not mean 10 DVDs, but thousands of DVDs,” Kok said.

Despite all that online-exclusive data, Kok added that “the boxed version allows people with a slower internet connection to install the sim without downloading the ‘content’. So the simulator is 100% the same in every way.” The retail boxed version just gets you a nice box, a printed manual and about 90 GB no download required.”

Disc juggling past and future

The rise of popular downloadable game services like Steam means that disc-based releases for major PC games have been a relative rarity for years. Many titles that get a “retail” release these days end up just being shipped in a box with nothing but a download code inside.

But Kok still thinks there is an audience for this particular product. “Keep in mind that in many parts of the world boxed [flight sim] add-ons are still doing very well,” he writes X-Plane we did extremely well and we are very proud of that. As we learned Microsoft Flight Simulator was a very large product (over 80 GB), we knew there would be a lot of people who could use a boxed version.”

In the US, at least, an Ars analysis shows that average household download speeds have largely outpaced the increase in game downloads in recent years. But that may not be the case globally, especially in remote areas where fast broadband isn’t as prevalent.

For users who may not have DVD drives on their PC towers these days, Kok said Aerosoft plans to offer a “cheap” USB DVD drive through its online store. “I have one, less than $20, and it works brilliantly,” he said. And while the same 90GB pack can easily fit on two Blu-ray discs, Kok says that’s not in the cards for this title; while “DVD drives are becoming rare in computers, Blu-ray drives have always been rare,” he said.

Flight SimulatorThe nine-disc release references the era of CD-ROM gaming from the late 90s. Back then, pre-rendered games such as Riven would be packaged on five CDs, while massive PlayStation RPGs like Final Fantasy VIII and Final Fantasy IX were spread over four separate disks. Before that, the Amiga version of Monkey Island 2 was famously spread over 11 floppy disks that had to be changed regularly during gameplay.

Nowadays, huge console games like Final Fantasy VII Remake and The Last of Us: Part 2 see physical releases with two Blu-Ray discs. Retail versions of games on the Xbox Series X and PlayStation 5 may need to cover even more discs – both consoles will stick to the Blu-ray standard rather than push for some sort of new, denser optical disc format (while both systems will support 4K UHD Blu-ray video, there is no indication yet whether games in this format can be delivered with higher capacity).

Of course, that assumes physical discs will continue to exist as little more than a small niche in the wider gaming market. With Capcom recently announcing that 80 percent of all game sales are digital, it’s no wonder that both Microsoft and Sony are experimenting with disc-drive consoles, just as Sony’s Kaz Hirai predicted a decade ago. That’s not a great sign for struggling physical game retailers like GameStop, who could be dealing with a world of nothing but zero-disc games relatively quickly.