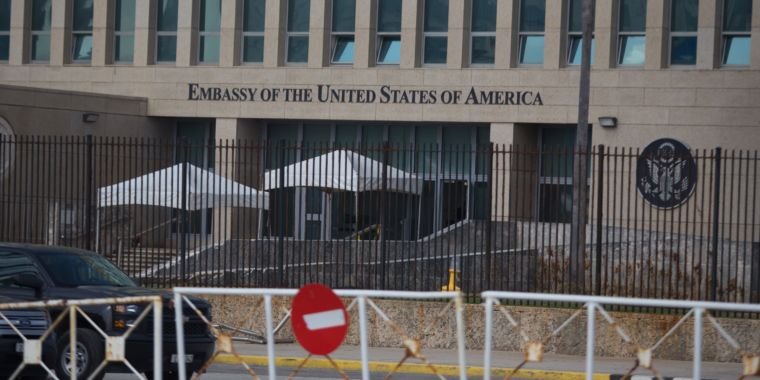 A preliminary case report on the victims of mysterious “health attacks” in Havana, Cuba describes the results of extensive clinical evaluations, concluding that the individuals “appear to have suffered injuries to widespread brain networks with no associated history of head trauma.”

The report provides the first medical glimpse of the victims: US government personnel and their families on diplomatic missions in Havana. From late 2016 to August 2017, they reported bizarre and inexplicable sonic and sensory episodes. The episodes usually contain focused, annoying sounds, such as buzzing and piercing squeaks, as well as pressure and vibration. Thereafter, the victims developed a constellation of neurological symptoms.

In clinical evaluations of 21 of 24 affected individuals, an interdisciplinary team of physicians at the University of Pennsylvania Perelman School of Medicine retrospectively pooled symptoms — an average of 203 days after individuals were exposed. They found that cognitive impairment was the most common problem persisting more than three months after exposure (17/21); balance problems (15/21); problems with vision (18/21) and hearing (15/21); sleep disorder (18/21); and headache (16/21).

More specifically, individuals had trouble remembering things (17/21), reported feeling more emotional (11/21), had trouble getting their eyes together to focus on nearby objects (convergence insufficiency) ( 11/21), were sensitive to sounds (14/21), had headaches while working (16) and had difficulty maintaining a static position at rest (16).

The doctors developed individualized rehabilitation programs for 18 people. Although the doctors noted improvement in those efforts, 14 individuals with the most severe symptoms had not returned to work at the time of evaluations.

Like a concussion, but without the blow to the head

In their analysis, published late Wednesday in JAMA, the doctors note that the set of symptoms is similar to that of a concussion or mild traumatic brain injury. However, the individuals reported no physical head trauma and conventional magnetic resonance imaging (MRI) revealed no apparent structural injuries. All brain imaging showed normal or non-specific problems that could be explained by age or pre-existing problems, despite previous reports.

Although the doctors went into more detail — at least as much detail as they could — they didn’t offer any hypotheses about what might have caused the injuries. So the report is unlikely to curb wild speculation about the incidents.

Since the first media and government reports of the cases appeared last year, guesses about the cause of the experiences and symptoms have increased. Some suggested cloak-and-dagger scenarios of malfunctioning surveillance equipment or the trial of a covert sonic weapon wielded by a hostile foreign power. Health experts discussed the possibility of a virus, chemical agent, or massive psychogenic illness (MPI) — essentially a collective delusion of a tight-knit group of people that a disease is spreading among them.

A panel of Cuban scientists — who had no access to the affected individuals’ medical reports — concluded in December that MPI was the most likely cause of the diplomats’ plight, as reported by Science. They had surveyed the hearing of neighbors of American diplomats and assessed ambient noise. The chirp frequency of the Jamaican field cricket (Gryllus assimilis) matches that of a rasping sound on a recording of one of the attacks, they noted.

But the team of Penn doctors questioned this hypothesis, noting that some of their clinical results — such as those in eye movement studies — could not be consciously or unconsciously manipulated. They also note that MPI usually involves short-term health problems, while many of the problems experienced by the subjects studied had long-term disabilities. Finally, the 21 people do not all know each other, according to an accompanying report in JAMA.

The doctors were also skeptical that a virus or chemical agent could explain the cases. None of the subjects reported common infection symptoms, such as fever. And it’s unclear how a chemical can affect the brain, but not another organ.

Finally, the doctors noted that “it is currently unclear if and how the noise is related to the reported symptoms.” Sound in the audible range (20 Hz to 20,000 Hz) is not known to cause sustained injuries to the central nervous system, they note. They suggest that the sounds were only associated with the actual harmful phenomena.

In an accompanying editorial in JAMA, neurologists Christopher Muth and Steven Lewis note that focused high-intensity ultrasounds (>20,000 Hz) can cause heating and brain tissue damage. “The technical challenges of using ultrasound for non-lethal seizures include the rapid absorption of ultrasound by the surrounding air and a requirement for proximity to the source to cause injury,” they write.

Similarly, researchers have found that infrasound can cause brain damage in rats, but again, it would be technically challenging to launch an attack without victims noticing huge loudspeakers or other signs.

In general, Muth and Lewis urged caution in interpreting the clinical results reported by the Penn doctors. They note that many of the symptoms are self-reported and there have been an average of 203 days since the exposures. Physicians also do not have basic health data on those individuals. And finally, basic information about individuals, such as age, was withheld for security reasons. Penn physicians could only report the mean age of the 21 individuals (43 years) and the gender breakdown (11 females and 10 males).

The leading Penn doctor told: JAMA that the doctors involved in the evaluations had all signed a nondisclosure agreement with the State Department so they can’t discuss whether they know more about the attacks.

These issues make it difficult to interpret the data, Muth and Lewis say. For example, three of the individuals required hearing aids after being evaluated. But without knowing their age and hearing ability prior to exposure, it’s hard to tell if this is a concern.

“At present, a unified explanation for the symptoms experienced by US government officials described in this case remains elusive and the effect of potential exposure to audible phenomena is unclear,” they conclude.

Muth and Lewis argue for more testing and evaluation of the individuals, which Penn researchers are already doing. This includes more advanced imaging to assess possible structural abnormalities. Muth and Lewis also recommended that embassy personnel in Havana undergo baseline neurological tests, in case future attacks occur. In this way, doctors could pinpoint the effects of the attacks and ignore existing problems.

For now, the US embassy is staffed with a skeleton crew, who perform only essential functions. The State Department has issued a Level 3 travel advisory, which reads: “Because the safety of our personnel is at risk and we are unable to identify the source of the attacks, we believe that U.S. citizens may also be at risk. “