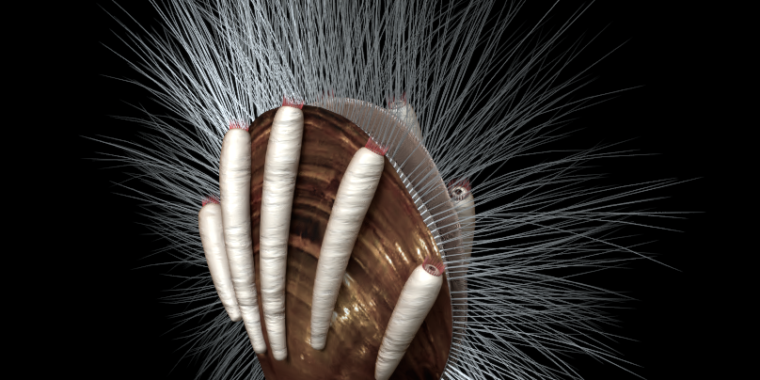 From the perspective of a beast looking for legacies deep into Earth’s history, there’s little chance you’ll achieve the great success. The chance of being fossilized is small enough. You have to die in the right place, be buried before being ripped apart or perish, and encounter the right kind of chemistry underground that replaces your fleshy bits with durable rock.

This unlikely chain makes recording common life events like your last meal or developing embryos even rarer. But in the case of a newly published study, researchers were lucky enough to find the earliest known parasites, still attached to the hosts they targeted some 510 million years ago.

The find comes from Yunnan, China, where a sedimentary rock called the Wulongqing Formation is teeming with tiny fossil brachiopods of a species called (very wisely) Neobolus Wulongqingensis† In the Cambrian period, shortly after multicellular animal life blossomed into an incredible variety, these creatures lived on the sea floor. A team led by Zhifei Zhang of China’s Northwest University found that: N. wulongqingensis wasn’t just in the rock – many were decorated with whitish tubes on the outside of their shells.

Nothing has really survived of these items beyond their tube-like form. But the consistent pattern on the brachiopods suggests they were creatures themselves rather than “trace fossils” like burrows or something purely geological in origin. They extend radially outward on the shells of the brachiopods, slightly beyond the rim of the shell.

To the researchers, they certainly looked like parasites. But clear identification of parasites in the fossil record has been quite rare. Even if both organisms are well enough preserved to be found together, can you be sure the relationship was? parasitic† That’s a zero-sum relationship where one organism extracts food at the expense of another. There are also mutualistic (both benefits) and commensalistic (one benefits and the other doesn’t care) relationships that could look the same if fossilized.

In this case, there were so many fossil specimens to work with that the researchers could do something really cool: compare the size of a few hundred tube-hosting individuals to a few hundred tube-free specimens. They found a very clear difference. Individuals with one or more tubes attached to them were about 26 percent smaller on average. There was also a correlation with how far back to the base of the brachiopods the tube started. It appears that tubes attached earlier in the brachiopods’ lives had a greater impact on their size.

That’s pretty good proof that these tubes were parasitic creatures rather than anything else. In particular, the researchers say they look like an example of what’s known as “kleptoparasitism,” meaning they stole the brachiopods’ lunch. Brachiopods are filter feeders, soaking up water and trapping food particles caught in the stream. Extending just beyond the open shell of the brachiopods allowed the tube parasites to catch food on their way in. It would be a bit like strapping yourself to a baleen whale’s nose and holding a net over its mouth. You would get free food and the whale would get less food for the effort expended.

This makes the tube creatures the oldest parasite identified in the fossil record. Their existence isn’t really surprising, as others have pointed to things like shell damage as possible features of (missing) parasites in other fossils of this age. Studies of the branches in the tree of life have also estimated that parasites must have had their evolutionary roots in the Cambrian. Still, it’s incredible to find one.

The researchers note that parasitism is considered a powerful evolutionary force and possibly even a major driver in the rise of sexual reproduction. So from that perspective, it’s remarkable to see parasitism in action during this extremely important period in evolutionary history.