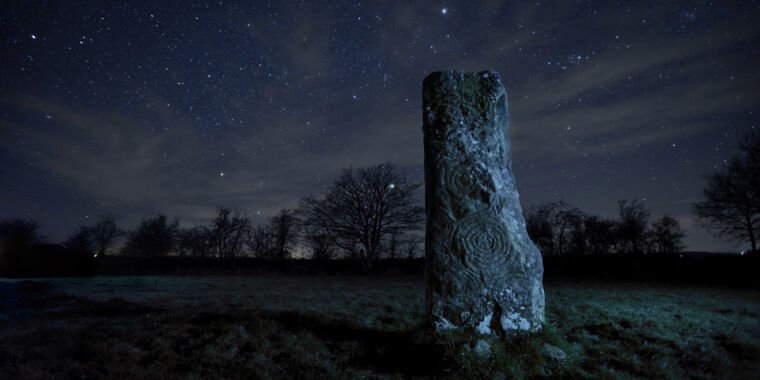 A man buried in the inner chamber of Newgrange Passage’s grave was the product of a sibling union, according to ancient DNA analysis. He was also further related to people buried in passage tombs up to 150 km away, suggesting that a network of related rulers ruled Ireland in the centuries after populations of Neolithic farmers first reached the island from mainland Europe. The find gives us a new insight into the last phase of the Stone Age and the beginnings of agriculture and settled village life in the area.

in the 11e century CE, someone in County Meath, Ireland, finally wrote down a sensual folktale that had been passed down for some 4,000 years. According to the story, an ancient king, from a tribe of gods, had slept with his sister during the winter solstice as part of a magical ritual to resume the sun’s daily cycle and save the world from an endless night. The couple allegedly committed the act in one of the county’s huge burial mounds, which locals called Fertae Chuile, or the mound of sin.

Today we know that mound as the Dowth Passage Tomb, a construction in which buried parts are reached through an entrance marked by large stones. Dowth is a close neighbor to the more famous Newgrange Passage tomb. And every winter solstice, the sun shines through the stone passage in Newgrange, illuminating the inner burial chamber. And nearly a thousand years after the local legend was first written down, ancient DNA suggests that at least part of the story — the most disturbing part, of course — was actually true.

“The magical solar manipulations in this myth have made scientists wonder how long an oral tradition could survive,” said geneticist Ros Ó Maoldúin of Trinity College Dublin, a co-author of the study. “It is extraordinary now to discover a potential prehistoric precedent for the incestuous aspect.”

Maoldúin and her colleagues, led by Trinity geneticist Lara Cassidy, sequenced DNA from the unarticulated bones of a man buried in the chamber at the end of the passageway from the Newgrange Tomb. About a quarter of the man’s genome was made up of very long stretches of homozygous DNA: DNA where both copies of the genes were the same, rather than the mix-and-match pairs that most people inherit from their parents. That strongly suggests that his parents were first-degree relatives — probably brother and sister.

The god-king and his sister

That points to what co-author Daniel G. Bradley, also of Trinity College Dublin, described as “a hierarchy so extreme that the only partners worthy of the elite were relatives.” Ordinary monarchs don’t usually marry their siblings; even the rulers of late 19e century, Europe had to settle for first or second cousins ​​to maintain their royal bloodlines. Rulers tend to marry their siblings only in societies where the king is actually considered a god, whose “perceived divinity exempts them from social customs.”

That’s something the pharaohs of ancient Egypt, the kings of pre-colonial Hawaii and the Inca emperors had in common—and apparently shared with the monumental tomb rulers of Ireland 5,000 years ago. The myth of the winter solstice probably helped these rulers make their claims to be gods and support the monumental (not sorry) effort it took to move 200,000 tons of rock to build passage tombs like Newgrange.

“Marking the winter solstice was crucial for early farmers, who needed to know when the days were getting longer,” National Museums Scotland archaeologist Alison Sheridan wrote in an essay on the genetic study. “Perhaps this elite claimed to have divine power by ‘controlling’ the movement of the sun.”

And the god-king buried in the tomb of the Newgrange corridor was apparently part of a well-connected class of such rulers who held sway over the whole island of Ireland for at least a thousand years. Cassidy and her colleagues sequenced 43 other genomes from Neolithic sites around the island. It turned out that the Newgrange man was related to people buried in at least three other large passage graves, including two located 150 km (93 miles) west of Newgrange.

According to them, the man buried in Newgrange was a sixth-degree relative of people buried in the Carrowmore and Carrowkeel Passage graves in County Sligo and the Millin Bay Megalith on the north east coast of Ireland. Sixth-degree relatives can be great-nephews, great-nephews twice removed, great-great-great-grandchildren/parents, or great-great-great-uncles or aunts (or nieces or nephews). Like a prehistoric version of the Habsburgs, this extended group of relatives seems to have ruled Ireland and maintained the connected dynasties for centuries.

These genetic clues to Ireland’s ancient ruling families shed a lot of light on the political and social fabric of the people who built the megalithic tombs that line the Atlantic coasts of Ireland, Britain, Spain and France.

Who were these people anyway?

The people who lived in this complex, hierarchical agricultural society resemble Ireland sometime around 3,800 BC. reached by sea. According to Cassidy and her colleagues, people who lived in France and Spain in the early Neolithic period were the most likely source for the slightly later Neolithic Irish people whose genome they sequenced — along with other Neolithic people in Britain. Those seafaring farmers probably sailed from France and Spain to colonize Britain and later sailed from Britain to Ireland.

Once those early farmers reached Ireland, they quickly overwhelmed the hunter-gatherers who had lived there for the past 4,000 years. Ancient DNA suggests that the newcomers absorbed, rather than wiped out, Ireland’s indigenous peoples; a man who lived between 3,700 and 3,500 BC. was buried at the Parkabinna court grave, had some traces of those original hunter-gatherers among his recent ancestors. But the newcomers from Britain didn’t just bring their DNA; they brought agriculture, new tools and megalithic architecture like the passage tombs at Newgrange and Carrowmore.

But while that scenario seems the most plausible, we need more data before we can be sure of the details. “Many pieces of the genetic puzzle are still missing, and more analyzes of Neolithic French individuals will be needed to resolve the question of the origins of Ireland’s first farmers,” Sheridan wrote.