In this ant species, 21% of the colony has major war wounds | Techilink 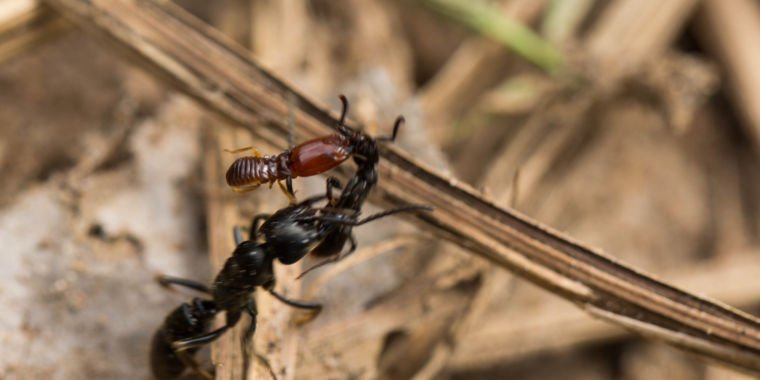 The battles with the termites are dangerous and deadly. They often bite off the ants’ limbs, heads or thorax. Sometimes the termites grab onto an ant with their powerful jaws and refuse to let go. While this doesn’t completely kill the ant, it prevents her from moving quickly and takes her out of the fight. Usually it’s the smaller ants in the termite nest that get hurt, and the survivors crawl out when the hunt is over.

That’s when the rescue teams hurtle through the battlefield. Although ants are blind, they have an exquisite sense of smell and touch. The larger ants make their way through the dead and dying, using their feelers to smell their fallen comrades. Injured ants release a special mix of chemicals from a gland in their jaws, which Frank and his colleagues identified as dimethyl disulfide and dimethyl trisulfide. When rescuers smell those chemicals on an ant, they pick her up and carry her home in the marching column — even as several heavy termites dangle from her body. Only ants with fatal injuries are left behind.

The sheer number of disabled but productive ants in one M analis colony offers an evolutionary explanation for why rescue behavior makes sense. Clearly, these ants are a huge benefit to the colony’s survival, as long as they can return to the nest to recuperate. But why take them home? The researchers wanted to know, so they randomly selected 20 injured ants and forced them to walk home alone. Thirty percent of them died, mostly from predation by spiders or other ant species. One particularly tragic ant died of exhaustion after dragging two bonded termites most of the way to the nest. Simply put, the injured are vulnerable and carrying them home protects them from further damage.

While it sounds like a basic idea, this type of rescue behavior is exceedingly rare in ants and other animals in general. Even under M anal, the behavior is only caused by a complex set of circumstances. Ants save each other only when they return from battle. When the investigators put an injured ant in the way of a column headed for an attack, they ignored her and left her behind. Repeating the experiment with a returning march got the wounded ant up and running right away. Thus, rescue can only take place if the injured ant releases its emergency chemicals in the right context.

The researchers note that they found a similar chemical signal in another ant species, P. tarsatus, but it did not lead to carrying behaviour. Instead, P. tarsatus exposed to the chemical began digging maniacally. It turned out that this type of ant is often the victim of a predator called an antlion, which catches ants by making quicksand-like traps. For this species, the distress signal meant “hurry up and dig me out!” And that’s exactly what the P. tarsatus did.

But why did the termite-plundering ant M analis developing such a specific, almost human form of salvation? Frank and colleagues believe this type of behavior could only have evolved in a group that forages collectively in a relatively small area, so that injured ants are always noticed by their sisters. It also seems to make sense for animals hunting prey that fight back and cause significant but non-fatal injuries. The benefits of rescue are significant, at least if your target is a large hunting party. The researchers write:

The fact that 21% of all ants have some form of long-term injury in the raid column confirms the great value of helping injured nestmates, a conservative estimate as non-permanent injuries are not included in this estimate. The value of rescue behavior is reflected in the sustainable colony size calculated by our model, which predicts a 28.7% larger colony size compared to colonies without this behavior.

The size of the colony also plays a role. A typical one M analis colony sees about 13 births per day, so every individual counts. You could contrast this with Argentine ants or army ants, which live in nests that can contain tens of thousands of individuals.

In the end, Frank and his team write that the rescue brigades of M analis are an excellent example of convergent evolution. While chemical communication triggers rescue among ants, empathy and other factors trigger it in humans. These behaviors may have evolved separately, but they result in the same basic outcome. Both people and M analis have many functional, productive members of their community who are disabled. And the rescues continue because each species benefits the species as a whole.