In termite wars, ants rescue and care for their wounded | Techilink 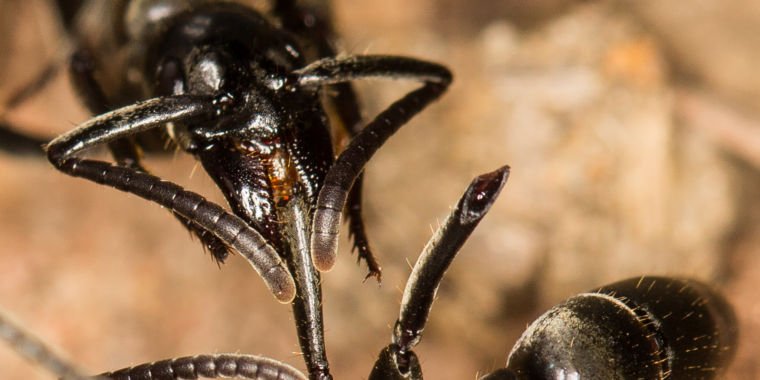 Deadly fighting takes place several times a day in the Comoé National Park in Côte d’Ivoire, leaving the wounded. The fighting breaks out when hundreds of African Matabele ants march off to raid a nearby termite mound to slaughter termite workers and drag them back to the nest to feed the colony. But termites, with their strong, sharp jaws, are not easy prey, and predators often have limbs bitten off during combat.

In the wake of a raid, researchers find evidence that the ants are caring for their wounded. The injured ants secrete a pheromone that summons other returning raiders to carry their injured comrades home. Back at the nest, healthy nest mates clean the wounds of the injured ants. And the behavior of injured ants even creates a triage system so that only the ants that can actually be rescued are rescued.

Ants that are only missing one or two legs can generally make the 50-meter trek back to the nest, but their injuries make them more vulnerable to predators, so about a third of injured ants trying to walk home will. do not get. So when nestmates are around, injured ants slow down and even develop a sudden tendency to fall.

But “after the recurring roundup was over without helping her, the injured ant immediately started following them at a faster pace,” ecologist Erik T. Frank and his colleagues wrote in their paper.

It may seem like these ants are just locking it up in a game for sympathy, but the behavior actually makes sense. The eyesight of other ants may not be sharp enough to notice an injury, but they can spot the slow, clumsy movements of an injured nestmate. And a slower ant has more time to interact with passing nestmates, meaning a greater chance of being picked up. Aspiring helpers will likely have an easier time locating the source of a chemical distress beacon that isn’t moving quickly.

When a rescuer touches a slightly injured ant with its antennae, the injured ant folds its remaining legs into a position similar to a doll and lies still, making it easier to carry. But the most severely injured ants, missing three or more legs, are left behind in what appears to be an eerie imitation of the triage human medics perform on battlefields and disasters.

“It would be wrong to think that the ants are actually making conscious decisions,” Frank told Ars Technica.

Helpers don’t carry their injured nestmates out of compassion or loyalty — ants don’t have the cognitive ability to sense those things — instead, they do it because chemical cues prompt them to pick up injured ants instead of dead termites. Likewise, Frank said, “The badly injured ant doesn’t tell the others to ‘leave her behind’ because she knows she won’t be of any use.”

Ants do not secrete the “help” pheromone until they have managed to pull themselves into a standing position, and the injured ants’ reflex is to try to stand. If successful, their bodies secrete the pheromone. If not, they won’t. And even when Frank and his colleagues applied the pheromone to seriously injured ants, their wild swinging made it too difficult to pick them up and carry, so the would-be helpers eventually gave up and walked away.

“It’s actually what fascinates me most about social insects: the ability to exhibit incredibly complex and sophisticated behaviors based on very simple rules and without knowledge,” Frank said.

Back in the nest, rescued ants receive the best medical care there is — meaning their nest mates lick the open wounds where their paws used to be.

“The remaining portion of the severed limb was held up and littermates gently held the injured limb in place with their jaws and forelimbs; this allowed them to intensely lick directly into the wound for up to four minutes at a time,” Frank and his colleagues wrote in their paper.

It’s likely that all that licking helps clear debris from the open wounds, and the helpful ants may even apply some sort of antimicrobial. Several ant species secrete such compounds in their saliva, and other ant species have been seen grooming nestmates to fight fungal infections.

Frank plans to spend his postdoctoral research at the University of Lausanne to find out and test several ant glands for antimicrobial or antifungal properties. He also wants to understand how the ants can locate the injury — or tell each other where it hurts.

Changes in the cuticle or exoskeleton of the injured ants (for example, a gaping hole) could indicate an injury to nestmates, or they could look for hemolymph — the insect’s version of blood — flowing from the wound. That may also be how ants know when to stop licking an injury; when the hemolymph stops flowing, it’s time to stop licking and move on. Frank, however, needs even more data to test those ideas.

However the treatment works, it’s clearly effective at preventing infection, and that clearly helps ants raid another day. Injured ants not receiving care died 80 percent of the time, but when Frank and his colleagues placed the injured ants on sterile soil, their mortality rate dropped to 20 percent. But ants that had nestmates licking their wounds died only 10 percent of the time.

For the greater good

Natural selection favors these triage, medevac and wound care behaviors not because it benefits individual ants – remember the worker ants won’t breed in the first place – but because it improves the condition of the colony. And that, according to Frank, could be why biologists haven’t observed this kind of behavior in any other animal species. “Treating a wound by another individual is much more beneficial in social insects where evolution generally applies at the colony level,” he said.

The benefit to the colony comes in the form of reducing the otherwise high cost of hunting tough prey such as termites. Frank and his colleagues noted that about 21 percent of ants on raids were already missing at least one limb, and four- or five-legged ants learn to move almost as fast as uninjured ants in about 24 hours. That means rescuing and treating an injured ant puts it back into battle the next day.

“By rescuing injured ants, the colony can reduce its mortality, i.e., its costs, when hunting dangerous prey such as termites. Since these injured ants later rejoin future battles, the colony does not need to produce new workers to replace them.”