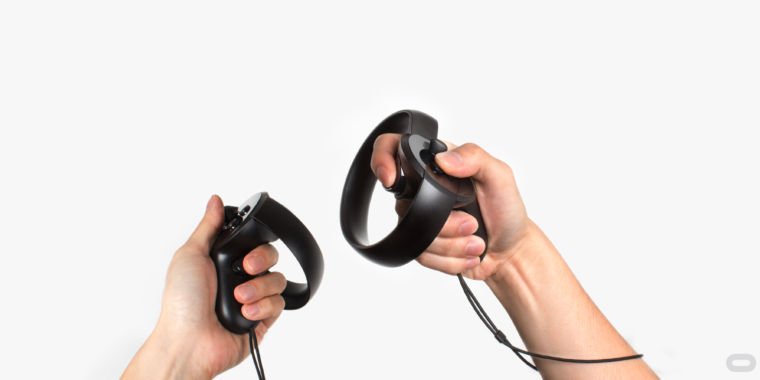 When the Oculus Rift launched in March, we felt that the lack of hand-tracking controllers was the biggest omission of an otherwise intriguing VR headset. Now, after countless demos at trade shows, we finally have Oculus’ hand-tracking Touch controllers in Ars HQ for testing.

A more comprehensive assessment of the hardware will have to wait until the December 6 release of the controllers gets closer. For now we can tell you that the Touch controllers are still incredibly comfortable to hold and very easy to track with the addition of an included second camera. We also have some early impressions of some of the launch titles that Oculus is using to show off this new hand-tracking.

Back in 2006, Wii Sports was the instantly accessible pack-in title that showed millions of players the potential of motion control in an easy-to-understand way. VR Sports Challenge obviously tries to play the same role for the Oculus Touch controllers, but it’s not as directly engaging or generally interesting as the Wii’s original killer app.

Rather than fully simulate every aspect of the sports it simulates, VR Sports Challenge divides them into a series of what amounts to linked mini-games, abstracting them into a high-score challenge. In soccer, for example, you aim and throw the ball to an open receiver marked green. Your gaze then immediately switches to that receiver and you have to catch a slow-motion ball coming at you by reaching out and grabbing it with the triggers (after the catch you’ll be shown the receiver being tackled right away).

You get thousands of points for the quality of each throw and catch, rendering the score of the underlying football game somewhat meaningless. The result feels less like a soccer simulation and more like a simple catch game you play with yourself.

Basketball is also restricted. Instead of running across the field calling out plays and battling for position at the basket, just dribble in place and look for open men to pass (then continue your own pass, a la the soccer minigame). Taking a jump shot with a flick of your wrist feels nice and snappy with the Touch controllers, and the physics is very forgiving. Even shots with bad form can successfully sail towards the basket (you can also “nudge” shots by tilting your head after release, a strange effect that is difficult to master).

Ice hockey was the most interesting included sport. You play the role of a goalkeeper in the net and watch as the opposing team effortlessly passes the puck (thanks to a penalty-driven 5-on-3 skater advantage). You need to track the puck as it moves because when a shot comes in you need to be ready to quickly move your stick or gauntlet hand to block it in real time (while staying alert for putbacks after the deflection, too). It’s a simple yet exciting reflex test that makes good use of the VR point of view, and this doesn’t force too much unnecessary abstraction from the real sport of hockey.

While you play on VR Sports Challenge, you slowly unlock new gameplay features and various mini-games. The ability to throw a basketball alley (and dip a windmill on the other side) is pretty fun, as is a hockey mode with five shooters launching pucks at you non-stop.

All in all, VR Sports Challenge comes across as a simplistic and disjointed tech demo to show new owners how their Touch controllers work. Without any of the social elements that made it happen Wii Sports an instant party favorite, this is the kind of game most new Touch owners will probably put down after an hour or so.

I don’t know what it feels like to be a wizard but after playing the unspoken— and seeing and feeling a fireball over my right palm before launching it at an enemy wizard across the street — I’d like to think I’ve got an idea.

the unspoken instantly stands out thanks to a natural, intuitive motion control interface that makes you feel instantly empowered. Aside from the basic fireball and a reflective shield that you can surrender with the other hand, more powerful spells are activated with simple arm gestures. For example, to put up a wall, hold the triggers and place your arms in a protective X. To launch a skull, push both palms together and forward like Ryu throws a hadoken.

Other spells are activated by performing simple minigames with your hands as quickly as possible: hit the targets on an anvil to create a powerful magic spear, or fold a paper plane to launch a fleet of biplanes at your opponent. Making these moves leaves you vulnerable, adding to the tension of what would otherwise be pointless and unnecessary moves.

While there are some limited single player options, the unspoken seems focused on multiplayer magic duels that are fought online. It’s a little awkward at first staring at your opponent from a VR pedestal, launching attacks on each other without the ability to move easily like you might in most first-person games (you can only teleport between set pedestals with a dot and click ). But you quickly learn how to move and take cover to try and gain an advantage over the opponent.

There is a slightly more light strategy involved in the balance between offense and defense. Do you spend time destroying the opponent’s magical resources or focus on developing your own resources? Do you waste resources by erecting a barrier or use them to launch more powerful attacks on the enemy?

In my early online matches so far, the aggressive strategies definitely seem to have the advantage of holding you back and protecting yourself. But that could change as the player base grows in experience and seeks out the best tactics to balance damage and protection. Even now, simply standing your ground and ignoring self-preservation is an easy way to die quickly.

Not sure if eSports is ready to make the leap to virtual reality, but the unspoken is a good early attempt at an online competition that really takes advantage of the new technology.

I only spent a short time with Oculus’ answer to Tilt brush, but so far there is a lot to love. While Tilt brush is mainly focused on painting and scribbling in the sky, Medium is more focused on creating and shaping 3D objects with real depth.

The easiest way to get started is with a set of preset stamps of objects ranging from human anatomy to mechanical gears and everything in between. These stamps provide a good foundation to start with, which you can then extend with tools that erase, flatten, swirl, cut, or morph the basic shapes to your heart’s content. Then you can decorate your 3D creation with paint or add extra dollops of clay drawn freehand with the highly responsive Touch controllers.

The interface makes nice use of the Touch controllers; one hand holds your palette of tools, while the other selects those tools and uses them on your sculpture. The triggers activate the main controls, but you can use the thumbsticks to quickly undo and redo actions, or to rotate and resize your tools. It’s also very satisfying to use the controller grips to grab and move the entire scene or scale it up and down with a flick of your hands.

When it comes to useless scribbling, a game like Tilt brush is easier to just jump in and play with. But when it comes to creating compelling 3D scenes, Medium may have more long-term potential for those with an artistic bent.