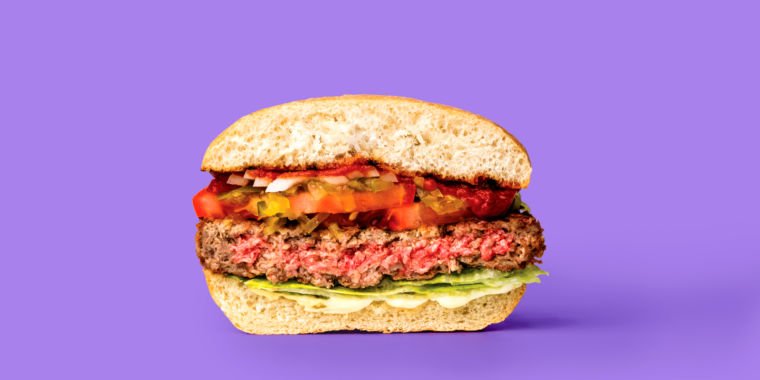 The chic, plant-based Impossible Burger that browns and “bleeds” like the real thing is now just that little bit more possible.

On Monday, July 23, the company behind the meatless meat, Impossible Foods, announced that the Food and Drug Administration had finally accepted its latest application to consider the burger’s main ingredient safe to eat. The latest kink places that ingredient — called soy leghemoglobin — firmly in the regulatory category of “generally recognized as safe,” or GRAS.

That’s comforting news for those of us who are already munching on the fake patties, which are currently being baked in nearly 3,000 restaurants in the US and Hong Kong. Until now, the burgers had fallen into a regulatory gray zone.

Last August, documents obtained through a Freedom of Information Act request revealed that the FDA had not accepted the company’s previous GRAS filing. The agency concluded that soy leghemoglobin — a protein found in the roots of soybean plants that Impossible Foods harvests from genetically engineered yeast and uses to simulate the taste and bloodiness of meat — had not been adequately tested for safety.

In the filing, Impossible Foods argued that the iron-containing protein is equivalent to hemoglobin, an oxygen-carrying protein in red blood cells commonly consumed in meat. So the protein was safe, the company concluded. It even went so far as to conduct studies in rats to substantiate the claim. But the FDA noted that soy leghemoglobin had never been used as an additive before, and the organization wanted data showing the protein was safe and not an allergen specific to humans.

“FDA believes that the arguments presented, individually and collectively, do not demonstrate the safety of soy leghemoglobin for consumption, nor do they indicate a general recognition of safety,” FDA officials wrote in a 2015 memo.

At the time, the decision dealt a hard blow to Impossible Foods, which had hitherto whetted the appetites of investors and top chefs alike and enjoyed glowing publicity. Since the company’s inception in 2011, big names like Bill Gates and Google Ventures have thrown up more than $250 million in startup funds, and the impossible patty sizzles on the menus of high-end restaurants like Momofuku Nishi in New York and Jardinière in New York. San Francisco. The soy leghemoglobin was a big part of that hype, and the company called it its “secret sauce.”

But the FDA’s gut check hasn’t knocked Impossible Foods off the market; it just left a bad taste. In fact, the company was not even required to file its GRAS filing due to the controversial way the FDA oversees food additives and GRAS designations.

Under the Food, Drug and Cosmetic Act of 1938 and the Food Additives Amendment of 1958, the FDA allows food companies and their hired consultants to internally test and determine a GRAS designation of a potential new additive. They can start using it without FDA approval or even notifying the agency. The FDA only intervenes afterwards if problems arise.

Consumer and health advocates have long opposed this system. More than 10,000 chemicals have been added directly or indirectly to foods in the US and food manufacturers use an estimated 1,000 without notifying the FDA. In a policy statement dated Monday, July 23, the American Academy of Pediatrics noted that of the nearly 4,000 additives inventoried by the FDA, only about 263 had reproductive toxicology data and only two of the additives had developmental toxicology data available. There are “critical weaknesses in the current food additive regulatory system,” the academy concluded. It went on:

Data on health effects of food additives on infants and children are limited or lacking; however, in general, infants and children are more vulnerable to exposure to chemicals. Significant improvements to the food additive regulatory system are urgently needed, including greatly strengthening or replacing the “Generally Recognized as Safe” (GRAS) determination process, updating the science base of the FDA’s safety review program, retesting all previously approved chemicals and labeling direct additives with limited or no toxicity data.

Of course, Impossible Foods had only filed its original GRAS application to get an extra splash of great sauce for its hit patties—which clearly backfired. In October 2017, the company had put together a new 1063-page application, which you can read here as a PDF. But the company stepped aside to conduct additional studies specifically pointing to its safety in humans. Instead, it relied on additional advice from consultants, which relied on literature searches of allergen data, molecular comparisons of similar proteins and a test in which the company digested its additive in the presence of simulated gastric fluids. The company’s panel of experts argued that Impossible Foods did not need to conduct additional allergen testing for soy leghemoglobin, but that it would nevertheless label its burgers “Contains Soy” as a precaution.

On Monday, the company announced that the FDA responded with a letter stating:

We have no questions at this time regarding Impossible Foods’ conclusion that the preparation of soy leghemoglobin is GRAS under the intended conditions of use to optimize flavor in analog ground beef products intended for cooking.

In other words, Impossible Foods was free to keep swinging its burgers and consider soy leghemoglobin safe.

“Receiving a no-question letter goes beyond our strict adherence to all federal food safety regulations,” said Impossible Foods CEO and founder Dr. Patrick Brown, in a statement. “From day one, we have prioritized security and transparency, and these will always be core elements of our corporate culture.”