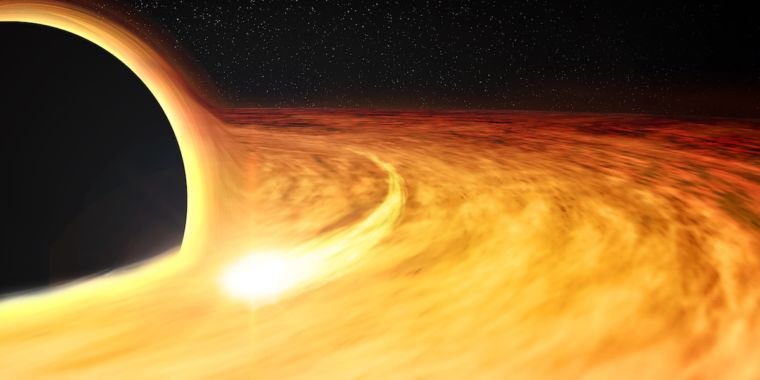 While black holes themselves consume all the light beyond their event horizon, the region beyond the event horizon tends to emit a lot of light. That’s because the material falling toward the black hole is extremely energetic as it throws off angular momentum and collides with other material in orbit around the black hole. So while we can’t directly image a black hole, we can infer some things about its properties using light from the environment it creates.

This week saw the release of two papers approaching the region close to the event horizon and mapping events in a region that includes some of the closest stable orbits to the black hole. And in the process, one of them discovers that a supermassive black hole is spinning so fast that a location on its surface would move at about half the speed of light.

Echoes of a corona

Both articles take advantage of periodic outbursts that occur when the black hole begins to feed on new material. That material enters the hole through a flat structure centered on the black hole, called an accretion disk. Its arrival heats the disk, makes the black hole brighter and causes changes in the local environment. The questions these two articles focus on are what these changes can tell us about the black hole and its surroundings.

One of the studies focuses on a black hole with a stellar mass, or one that is typically less than 10 times the mass of the sun. In response to some infalling matter, one of these black holes created a transient event called MAXI J1820+070, which takes part of its name from the International Space Station’s Monitor of All-sky X-ray Image instrument, or MAXI. The discovery of the event was then followed by observations using another piece of ISS-based hardware, the Neutron Star Interior Composition Explorer (or NICER). NICER has the ability to take very fast measurements of the X-rays from astronomical sources, making it ideal for tracking short-term changes in an object.

In this case, NICER was used to perform a so-called “reverberation analysis”. This technique relies on the fact that, in addition to the accretion disk, black holes have a corona, a blob of energetic material above and below the plane of the disk. This corona will produce its own X-rays, which instruments can detect. But those X-rays also end up in the accretion disk, and some of them are reflected back to us. These light reflections can tell us something about the details of the accretion disk.

In this case, the light reflections solved a little mystery. In the supermassive black holes at the center of galaxies, imaging had suggested that the accretion disk extended into the closest stable orbit around the black hole. But measurements of stellar black holes indicated that the edge of the accretion disk was much further away. Because there were no obvious reasons why the physics should change with size, these measurements were a bit confusing.

The new analysis shows that there are both variable characteristics and constants for the X-rays of the MAXI J1820+070. The constant features suggested that the accretion disk, which provides the echoes, did not change location at all; instead, the variable features suggest that as the black hole feeds, its corona becomes more compact, shifting the source of the X-rays. Details of the constant signal suggest that the accretion disk is much closer to the black hole, making the measurements consistent with what we’ve learned from the supermassive versions.

A star is killed

In super-heavy land, we have ASASSN-14li, discovered by the All-Sky Automated Survey for SuperNovae. This outburst had the features associated with what’s called a “tidal disturbance,” in which the black hole’s gravity rips apart a star that happened to wander too close. Follow-up observations, however, showed that there was a peculiar structure in the signal: it became equally bright every 130 seconds.

Although the signal was inconspicuous against the background of the star’s destruction, it was present in data from three different instruments, suggesting that something happened periodically. The simplest explanation is that part of the star has entered orbit around the black hole. The frequency of these orbits would depend on the black hole’s mass and spin, as well as the distance between the black hole and the object orbiting it. The spin of a black hole is difficult to measure in any other way, so the researchers ran several simulations and tried different configurations for the black hole system.

The black hole’s mass was estimated based on the size of the galaxy that inhabits it. Spin and orbital distance have a simple relationship: the closer something is to a black hole, the slower the black hole can spin to make the object spin at the same speed. So by calculating the closest possible trajectory, they were able to give a minimum value for the spin.

The calculations suggested that the black hole is rotating at least at a speed where a point on its surface would move at about half the speed of light. (For context, a supermassive black hole can be so large that its radius is roughly equal to the orbital radius of Saturn or Neptune.) As the material spins further away, the black hole rotates even faster.

While we still can’t directly image black holes, the two papers show that enough events are happening at black holes somewhere in the universe to give us a lot of data about their behavior. And because of this, we are now able to draw conclusions about the properties of the black holes themselves, as well as about the material waiting to join them. We’re also starting to get some information from gravitational wave detections, which provide information about the masses and spins of the colliding black holes. Combined, these data ensure that “black” does not mean: terra incognita.