I’m still not sure what Scalebound is, but I absolutely want it |Techilink 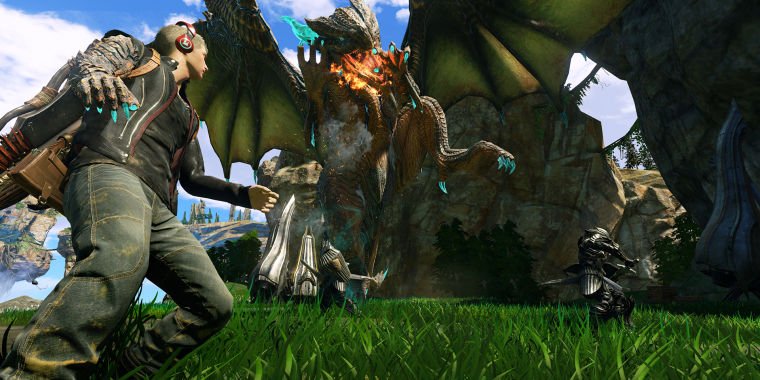 COLOGNE, Germany – What is Scale bound? A slick, action-packed Platinum Games (makers of Bayonetta) combo party? A fantasy RPG with dungeons and dragons and magic spells? An epic story-based adventure? Two years after the announcement – and three years since development began – I’m still not sure. Heck, I don’t think even Microsoft knows.

Scale boundGamescom’s outing is the latest in a long line of short video clips, tech teases, and scripted battles released since E3 2014, where the game was first unveiled in spectacular fashion at Microsoft’s press conference. The debut trailer — which introduced an arrogant 20-year-old hipster in headphones named Drew and his hulking great dragon Thuban — drew criticism for its protagonist’s apparent douchbaggery, but the overall appeal was undeniable. A new Platinum Games title with fire-breathing dragons and four-player co-op? Shut up and take all of my money.

What we know about Scale bound so far is that Drew and Thuban fight side by side rather than each other, and that it’s an open-world game set in “Draconis” with RPG-like elements and real-time combat. The biggest reveal came during Gamescom 2015, when Microsoft showed off a lengthy gameplay trailer showing Drew riding Thuban – complete with light human-to-dragon banter – into battle against a group of heavily armored soldiers. Cue some sword swinging, crossbow shooting, and plenty of random numbers popping up all over the screen. Oh, and a battle against a giant praying mantis culminating in a fierce fire-breathing attack from Thuban.

There were some brief, if sometimes vague, descriptions of the game’s RPG and combat mechanics alongside the pretty visuals (this is one of the best looking games on Xbox One) from Platinum Games’ legendary producer Hideki Kamiya. Drew and Thuban (de last dragon in Draconis) are paired, share the same health bar and can perform joint attacks in battle. Thuban is fully AI-controlled, but Drew can issue commands, while also using his scaly dragon arm to scan enemies for weak points. Oh, and there’s a giant glowing mushroom in Draconis called “The Pulse”, which looks a bit like “The Force” and connects Drew and Thuban.

“We came up with this thing called The Pulse, and how The Pulse feeds energy into these characters’ lives, and how it’s actually the energy source for the world of Draconis,” Kamiya told IGN at the time. “There’s a fine balance that we need to strike to maintain the credibility of the world of Draconis. So the basic idea that we’ve defined internally is that about 80 percent of what you see feels familiar, something you’ve seen or felt. or experienced, but the remaining 20 percent is something shaped or shaped by Pulse energy.” That makes that clear.

At Gamescom 2016, Kamiya briefly described another gameplay system, albeit a rather significant one. Dragon Link is a system that allows Drew to control Thuban and switch the third person perspective for a first person perspective. This gives you a wide, cinematic view of the action as you directly control Thuban, through Drew’s eyes, mashing buttons to crush and bash, and setting monsters on fire with wild abandon. You can open weak spots on enemies or perform a combo attack, including one where Thuban hurls an enemy into the air in classic Platinum Games style, giving Drew the chance to jump in with a slashing sword attack.

The flip side is that when using Dragon Link, Drew is immobile and defenseless. If there’s more than one enemy, another can easily throw Drew off, meaning you’ll need to team up with other players to take on bigger bosses, or be especially strategic when it comes to deploying Dragon Link. It’s the first sign that Scale bound may have some true Platinum Games-esque combat and strategy buried beneath the lame crossbow projectiles and millennial-esque smack talk. Also nice is that Thuban itself can be leveled up and customized into one of three dragon types: the standard rex class, an all-rounder with classic dragon looks; a sturdier tank class that walks around on all fours; and a wyvern class that is agile in the air.

You are not limited to any particular class, so you can merge part of the tank class with the rex class, creating a hybrid dragon that shares the skills and appearance of both. Dragons can also be decked out in armor (purchased with in-game currency), ranging from samurai-inspired plates to medieval metal. There are parts for the tail, and claws, and wing tips, and head, and arms… pretty much every part of the dragon can be armored. However, armor is destructible, so reckless fighting will result in loss of armor and money.

That’s all fine and dandy, but how it all fits together remains a mystery. Microsoft hasn’t shown much Scale bound because it demonstrated some neat, but disparate, gameplay systems without actually showing anyone the game. It feels like Scale bound debuted way too early, and while giving people an early look behind the scenes of game development is all the rage these days, something tells me this slow trickle of information wasn’t part of the plan. In January, Scale bound was pushed back from its original holiday release date in 2016 to an undetermined point in 2017.

With any luck, we’ll get some hands-on time with the game, whether it’s a demo or beta release before 2017. Clever genre mashups aren’t a bad thing, but they’re a hard sell (Scale bound was shelved twice before being picked up by Microsoft), especially for a mainstream audience. I’m excited to try it. After all, this is a Platinum Games game with fire-breathing dragons and giant spiders and praying mantises and things that explode with a lot of over-the-top ferocity. I take that, mysteriously and all, about a different shooter every day.

Scalebound will be released in 2017 for Xbox One and PC.