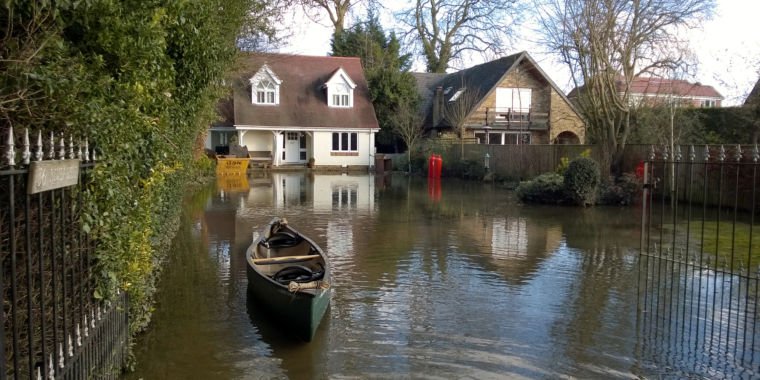 Much has been said about the millions of people around the world whose homes will be at the mercy of rising sea levels. Within the US, a six-foot rise in oceans could displace as many as 13.1 million people by 2100. Up to 180 million people worldwide could be at risk.

There’s been less talk about exactly where those people go when they leave their homes. Climate migration research has portrayed sea level rise as “primarily a coastal problem,” writes Mathew E. Hauer in Nature climate change this week. But the inland regions that take in climate change migrants will need adequate transportation, housing and infrastructure to take in the migrants.

To get a sense of what this could look like within the US, Hauer combined two different datasets into a predictive model. Such a model is based on many different assumptions, but it gives a first sketch of what the impact on the interior could be.

The IRS collects data on migration by recording when a person’s tax return is filed in a different location from year to year. So the IRS data shows patterns in migration within the US. Migration decisions are not random: people choose new locations based on networks of family and friends, job opportunities, and other factors such as thriving economies or good infrastructure.

Hauer combined the IRS data with the climate migration models that suggest 13.1 million US Americans will be displaced this century.

Texas is likely to be the state that takes in the largest number of climate migrants, possibly as high as 1.5 million, according to the model. Georgia and North Carolina are next in line. Florida could lose as many as 2.5 million people, and Louisiana and New Jersey are also likely to be particularly hard hit by migration from coastal areas. But “no state is left untouched,” writes Hauer. And there will also be intra-state migration, meaning more than half of the counties in the US are likely to be affected by migration.

But the exact figures are not the most important part of the study, writes environmental researcher Jeroen CJH Aerts in a commentary Nature; the really essential thing is just flagging the topic as one in dire need of more research.

Aerts points out some of the assumptions in Hauer’s model that may not hold up under close scrutiny. For starters, people may not be following IRS immigration patterns when migrating for climate-related reasons. It is also likely that at least some of these areas at risk of flooding will choose to invest in protective infrastructure, ultimately reducing the need for people to leave. “Such measures are likely to be implemented due to the high cost of not investing in protecting urban land and infrastructure,” Aerts writes.

That’s not to say that Hauer failed to recognize some of the complexities of migration. Some people may choose not to move very far, he notes, and simply move within the same general region or to other, safer coastal areas.

There is also the question of who can afford to get out. Hauer assumes that people earning above a certain level can choose to stay and pay for protective infrastructure, while Aerts points out that it is probably the poorest people who are trapped in a region that has no option to leave. And the model does not account for migration to the US from other countries affected by sea rise or migration from regions suffering from other climate-related issues such as drought.

“There is still a lot we don’t know about the influence of climate change on migration,” Aerts writes. “[Hauer] has argued (perhaps indirectly) that rigorous adaptation in coastal areas is urgently needed, especially in developing countries where millions of people are unable to leave these areas.”

This is really just the beginning of a much bigger conversation, and hopefully more models will be built to see how different assumptions play out. Understanding these patterns is vital — and that conversation needs to extend to inland areas and the infrastructure they need.