If you liked the Cambrian Explosion, you’ll love the Ordovician Radiation | Techilink 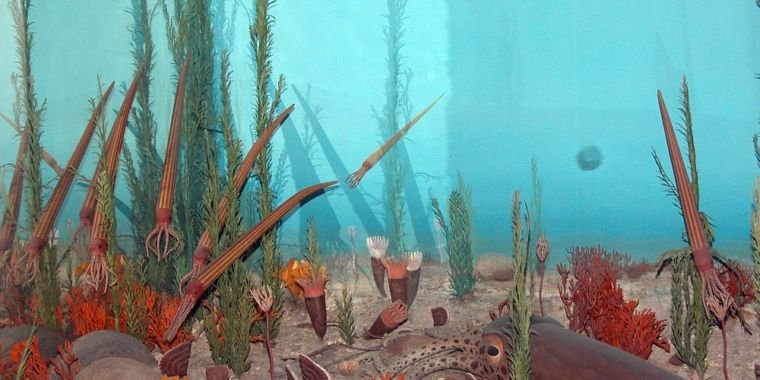 More than half a billion years ago, during the Cambrian geological period, life on Earth started to get a lot more interesting. Thanks to the increase in free oxygen, mainly generated by photosynthesizing algae, life forms could obtain much more energy from the environment. That meant the rise of multicellularity and the beginning of a world filled with the macro-sized plants and animals we know and love. That moment, full of weird animals like Anomalocarisis called the Cambrian explosion.

The Cambrian explosion is getting a lot of attention because it was the first time multicellular creatures ruled the planet. What few people (except geologists and paleontologists) realize is that there was an even crazier time for early life. It came during the Ordovician period, just after the Cambrian ended 485 million years ago. The Ordovician Radiation, also referred to as the Great Ordovician Biodiversification Event (GOBE), saw a quadrupling of diversity at the genus level (that is, the category is one step above species). Life also began to occupy new ecological niches, clinging to plants floating in the ocean’s water column and burrowing deep into the seafloor.

Like the Cambrian, the Ordovician was a period when all life still existed underwater. Most of the continents formed a supercontinent called Gondwana over the South Pole, creating the largest tropical coastline in our planet’s history. (There were no polar ice caps at this time.) The warm coastal waters around Gondwana were perfect for new species of animals, such as brachiopods, crinoids, ostracods, cephalopods, corals, and bryozoans. In addition, everyone’s favorite Cambrian animal, the trilobite, diversified like crazy, moving into many new habitats during this time.

One of the most emblematic animals of the Ordovician radiation is the largely extinct graptolith. Graptolites successfully spread across the world’s seas. Most lived in floating colonies made of collagen or chitin tubes that they extracted from their bodies, much like bees make wax. To get food, they stuck their tentacles out of openings in these tubes.

Environmental scientist Cole Edwards of Appalachian State University in Boone, North Carolina, worked with a team analyzing chemical features in ancient rocks that tell us about gases in the atmosphere millions of years ago. In a new page Natural GeosciencesEdwards and his fellow researchers offer a possible explanation for the Ordovician radiation: an even greater dose of oxygen in the atmosphere, which also meant there was more oxygenated water in the then-shallow global oceans.

A global increase in atmospheric oxygen and oxygenation of shallow marine environments may also have alleviated stressful conditions for benthic animals and expanded the range of habitable ecospace for infaunal burrowers deeper in the sediment. A more oxygenated ocean could also have supported more predators in the food chain (fish and cephalopods), setting off an evolutionary “arms race.”

Essentially, the increase in oxygen has opened up new habitats, creating more evolutionary adaptations to these new environments. At the same time, there was enough energy to support more predators, such as cephalopods, the shell-bearing ancestors of today’s squid and octopuses. There’s nothing like an arms race between predator and prey to cause rapid evolution as well. So there was basically a perfect storm for evolution.

Unfortunately, the evolutionary free-for-all came to a terrible end during the world’s first mass extinction event, which closed the Ordovician about 440 million years ago. For reasons that are still poorly understood, the planet’s temperatures plummeted, ushering in two ice ages in rapid succession. All those warm coastal areas dried up and froze. As a result, more than 75 percent of all life on Earth became extinct. The researchers speculate in their paper that the increase in oxygen, accompanied by a decrease in carbon dioxide, could have been one of the factors leading to these catastrophic ice ages.