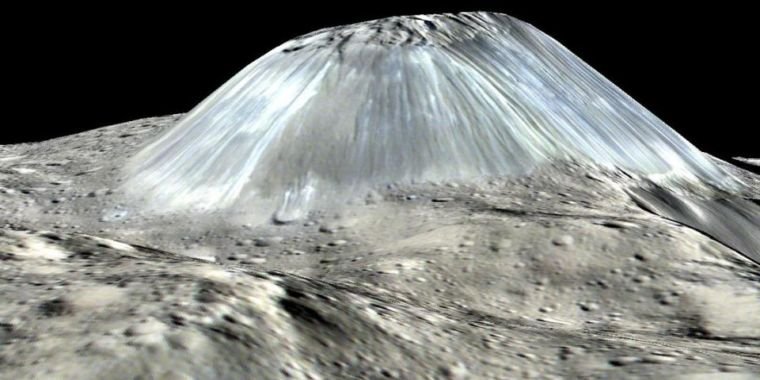 All bodies in our solar system started out hot, with energy built up from their gravitational collapse and subsequent bombardments. Radioactivity then contributed to further heating. For a planet like Earth, that has kept the interior warm enough to sustain plate tectonics. However, smaller bodies like Mars and the moon have cooled and become geologically silent. That set expectations for the dwarf planets, which were thought to be cold and dead.

Pluto, however, turned out to be anything but. It turns out that water and nitrogen ice require much less energy to participate in active geology, and radioactive decay and sporadic collisions seem to be enough to sustain this. Which brings us to Ceres, a dwarf planet that is the largest body in the asteroid belt. The Dawn spacecraft identified an unusual peak called Ahuna Mons, which some have suggested is a cryovolcano, erupting viscous water ice. But why would Ceres only have enough energy to support a single volcano?

A new newspaper suggests not. Instead, there may be more than two dozen cryovolcanoes on Ceres’s surface. We just didn’t see them because the geology on the dwarf planet didn’t stop when the cryovolcanoes stopped erupting.

Ceres itself was a bit of a surprise. Based on its density, it is expected to be rich in water. And at the temperatures typical of the body’s surface, water ice flows slowly, just like in glaciers on Earth. Over time, this should cause large surface features (such as craters and peaks) to regress to a more average shape. Still, Ceres is covered in large, ancient features, suggesting the icy crust is stiffer than we thought.

But a team of US-based researchers recognized that, as their name implies, all cryovolcanoes would erupt water-ice-rich materials, which should gradually flow back into shapes that look like flat terrain. So they started with a peak shaped like Ahuna Mons and modeled how it would deform over time. They then took a database of images taken by the Dawn spacecraft and scanned the dwarf planet for structures similar to those in their model.

The result of their model was that they found 32 possible cryovolcano structures. A few of the images provided insufficient data for a full reconstruction of their features, and others were partially wiped out by impact craters. Even if those were eliminated, however, they were left with a collection of 22 dome-like features that could be former cryovolcanoes. These ranged in diameter from 15 to 85 kilometers and extend up to 4.4 kilometers above the surrounding terrain. Typical volumes were hundreds to thousands of cubic kilometers.

The collection included a feature called Yamor Mons, which most resembled the spire, similar in proportion to Ahuna Mons. But the authors don’t think it’s a recently active cryovolcano. Instead, the poles are 55K colder than the mid-latitudes — at that temperature, water ice is much stiffer. So this could be a much older volcano that just isn’t sinking back to the level of its environment.

Elsewhere, all the domes had slumped down, making them much wider than they were high. The extent to which they collapsed allowed the authors to determine that they are likely hundreds of millions of years old, suggesting that cryovolcanism has been active on Ceres for a very long time, possibly since the beginning of its history. Based on the census and their expected survival time, it seems that a new cryovolcano has formed about every 50 million years for the past billion years.

Dawn’s orbit around the dwarf planet allowed researchers to record subtle changes in the craft’s speed that yielded details about Ceres’ interior. So the researchers compared this data with the location of cryovolcanoes and found that there was no relationship between the thickness of Ceres’ crust and the presence of a volcano. So they conclude that the volcanism likely originates in the crust rather than being driven by hot material deep within the planet, as it is on Earth.

In terms of volume, it is also very different. Even if you scale up the volcanic velocity on Ceres to account for its size difference with Earth and other terrestrial planets, the volcanic activity on Ceres is at least 10 times lower.

Still, the new paper provides strong evidence that Ceres is geologically active. Its activity will be different from Pluto, where conditions are colder and the ice is not water, and also from Io, where volcanism is driven by the gravitational forces of nearby large bodies. The results thus suggest that there may be a wide variety of ways to stimulate volcanism.