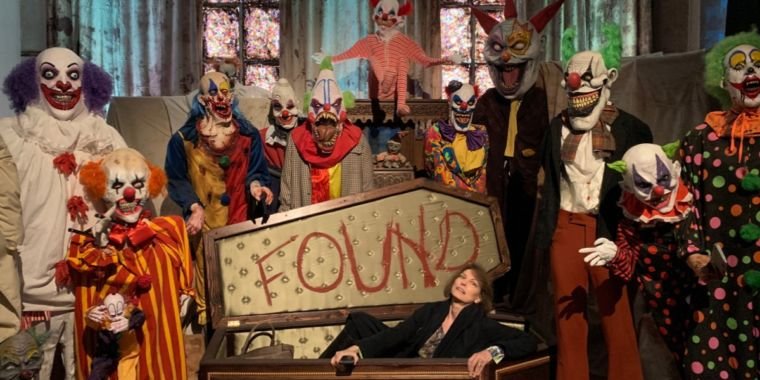 Horror movie fans are known for their love of immersive “haunts”: special event exhibitions that pay tribute to their favorite movies while also showing fans a bit of the scary action. That’s the thought behind it I like scary moviesa pop-up interactive art installation that just opened in Los Angeles.

I like scary movies is the brainchild of “experiential” artist Maximillian Castillo (who goes by Maximillian), known for his interactive immersive creations, such as a Snakes in an airplane installation or a pirates of the caribbean walk through for San Diego Comic-Con. He’s also a horror film buff, and the current exhibit — housed in the historic Art Deco building The Desmond, along Los Angeles’s Miracle Mile — is inspired by five films in particular: The Shining, It, A Nightmare on Elm Street, Beetlejuiceand The Lost Boys†

“I wanted to do something that was more like an interactive art installation — something that’s not your standard Halloween scare maze, which I love, but I feel like we can celebrate and interpret these movies over and over,” Castillo said in a statement. interview. “Besides going through a maze once a year on Halloween, there’s no other way to really enjoy these movies and dive deeper into the content of these movies and these worlds.”

At the entrance of I like scary moviesvisitors are in The shining‘s “redrum” hedges, move to the next rooms from there. Also from The shining: Castillo’s take on the famous scene where a torrent of blood pours from The Overlook’s elevator — the bloodstream is made of strands of red movie tickets — and a chance to sink into the hotel’s signature carpet after posing on a replica of Danny’s tricycle. Freddy Krueger’s “throne” is here, plus several set pieces from beetle juiceFor example, you can put your feet in a shark’s mouth while lying on a chair, like the sea-diving ghost in the movie.

Most appealing is the installation for It† Castillo created an eerie Pennywise teepee from children’s toys and other similar found objects, alongside several models of the killer clown’s nightmare-inducing crock of teeth that are large enough for visitors to poke their heads into. But it’s the hanging strings of paper boats (reminiscent of little Georgie, whose disappearance sparks the events of It) that sets this feature apart. The piece is truly artistic and it creates a winding path leading to the sewer hole, while lighting creates caustic patterns on the floor to mimic the flow of water.

Each installation provides ample opportunity for visitors to snap photos of themselves and their friends in their favorite horror scenarios: posing in a coffin in Pennywise’s underground sewer lair, perhaps, or hanging from the Santa Clara train tracks from The Lost Boys. Scary movies is interactive art that is ready for the Instagram era, and it makes for a fun afternoon diversion. But the experience won’t come cheap: Tickets are $39 each.

I like scary movies should stay at The Desmond through June 16, before Castillo (hopefully) takes his road scare.