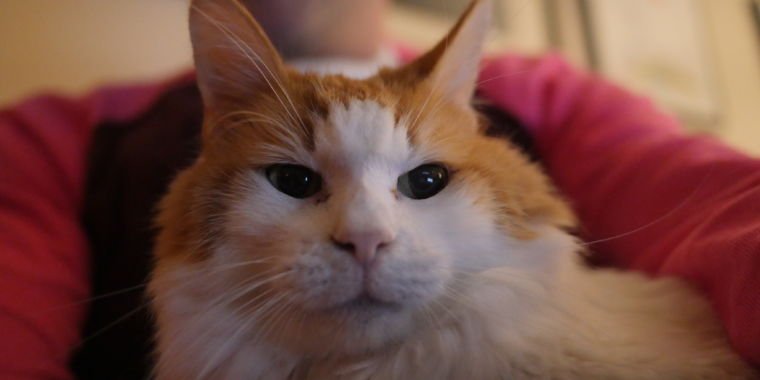 Earlier this year I brought you the story of how my cats – Tux, Tuffy and Nigel – donated their poop to science. While that – if you’ll pardon the pun – was mainly for pooping and giggling, Tuffy eventually followed through on that inquiry, though not by choice. I put him in a follow-up study to see if a fecal microbiome transplant could cure his inflammatory bowel disease. The little guy’s gut flora showed a textbook response to the microbiome recovery supplement, and it did what drastic changes to his diet and twice-daily doses of potent steroids couldn’t: It ended the chronic diarrhea that was definitely no fun for everyone involved.

While that may be of academic interest, many hope that a better understanding of the microbiome will lead to improvements in human health. By combining microbiome data with medical histories, it is possible to correlate different conditions with different microbial populations. And while that has resulted in some exaggerated claims, it’s become clear that the microbiome can have real effects on our health, especially if the microbiome changes after exposure to antibiotics, antibacterial soaps or environmental chemicals.

But this isn’t just limited to humans; all animal species have a collection of associated microbes. In fact, many of the most compelling results linking microbes to health have come from mice. The Kittybiome Project is a crowdfunded research program that uses DNA sequencing to get a sense of the types of gut bacteria found in cats. The goals are to better understand how different microbe populations can affect feline health and to provide a fun way to do some scientific outreach to the public.

In 2016 I enrolled our cats in Kittybiome. Nigel and Tuffy were found to have below average diversity of intestinal flora. While this didn’t seem to really affect Nigel, it may very well have been a factor in Tuffy’s IBD, which developed in the second half of 2016.

What the heck is a fecal transplant?

Much microbiome research has focused on the gut. Our gut is full of bacteria that work hand-in-hand with our immune system to limit the growth of pathogens and control gastrointestinal conditions such as Crohn’s disease, IBD and ulcerative colitis. Animal studies have suggested that the gut microbiome plays a powerful role in obesity. While connecting those dots is a useful scientific endeavor in its own right, the real excitement is about the potential to use the microbiome as a tool. Enter the fecal transplant, a technique in which stool from a healthy donor is collected and inserted into a patient’s gastrointestinal tract.

Fecal transplants have already shown positive results in the treatment of chronic diarrhea in humans and puppies. And because the Kittybiome project revealed a much higher incidence of chronic diarrhea in domestic cats than previously thought, Holly Ganz (the founder and CEO of AnimalBiome, the company behind the project) decided to see if the approach could be beneficial. are for our feline friends. . With nothing else to lose, we decided to give Tuffy a try.

While some of you may cringe in horror at the thought, transferring poop was no messier than giving a cat another pill. The dirty work happened in the Bay Area, where Ganz and her team identified some healthy donor cats, then freeze-dried their feces and packed them into capsules. Tuffy’s microbiome supplement started in early March and lasted three weeks. Even though the capsules were quite small, the poor little guy didn’t really enjoy having them down his throat several times a day. But it wasn’t like he was enjoying the standard treatment for IBD, which involves having a liquid steroid in his mouth morning and night.

The transplant seemed to have no effect during the first weeks. But during week three, we started to see changes. His need to use the litter box decreased dramatically (from every 2-3 hours to once or twice a day), and we witnessed a spectacular improvement in consistency as measured by the Bristol Stool Scale. (Yes, that’s a thing.) And this phenotypic response was reflected in the DNA sequencing results, which showed a response that Ganz described as textbook. As you can see in the charts, there were big increases in a number of taxa known to fight inflammation and aid digestion. Instead of the very low levels prior to the start of the transplant, Tuffy was at the high end of the range for healthy cats at the end.

Goodbye and thanks for all the fish

While I wish I could end this piece on a happy note, that just isn’t possible in this case. As his GI distress cleared up, Tuffy never regained his lost muscle mass. Despite our best efforts to supplement his diet with his favorite foods (McDonalds hamburger patties and ham baby food, in case you’re curious), Tuffy’s weight loss continued. For a cat that was once on the scale at 15 pounds, it was down to 6 pounds in mid-May. And then he stopped eating.

As our wonderful vet explained, cats can crash very quickly. After fighting through and enduring what must have been a miserable year—the twice-daily meds, the vet visits, the diarrhea and pain—he had apparently had enough.

He had only one joy left: basking in the sunlight. We had just moved and Tuffy (along with our other cats) now had a safe, walled yard in which to spend time outside unsupervised. He has to chase a squirrel. (Don’t worry, he didn’t catch it.) Unsteady on his feet and almost exhausted with energy, he still climbed the stairs to our bedroom at night, to sleep under the covers a few more times.

On Memorial Day, it was clear to everyone that it was time. After a quiet day spent outside in the sun, our vet came to the house and we said goodbye. Tuffy passed out in my arms and died at 3:15 pm. He was a good cat, arriving in 2002 as an extremely terrified barn rescue and brave and gregarious in subsequent years, brightening up our lives all the while.

Writing these last three paragraphs was difficult, but it’s comforting to know that he made his own contribution to science, one that will live on.