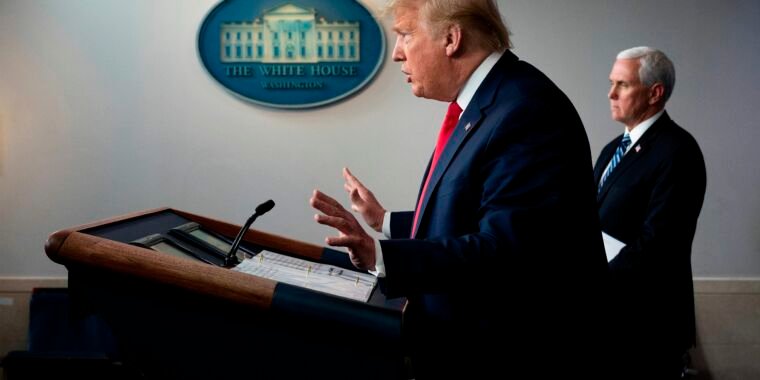 The US National Institutes of Health on Thursday began a clinical trial to treat adult COVID-19 patients with hydroxychloroquine, a malaria drug that President Trump has repeatedly promoted during the pandemic, despite a lack of evidence of its effectiveness against the novel coronavirus. .

The trial is one of dozens underway to test the drug, which is currently used to treat malaria and rheumatoid diseases, such as rheumatoid arthritis and lupus. At this point, it has only mixed, anecdotal evidence to support its use against COVID-19.

But that hasn’t stopped President Trump from repeatedly promoting it as a promising treatment and calling for its use. In tweets last month, Trump said a combination treatment of hydroxychloroquine and the antibiotic azithromycin “has a real chance of becoming one of the biggest game changers in the history of medicine.” He followed up on the statement and said he hoped they “will be put into use IMMEDIATELY”.

In a press conference on Saturday, April 4, Trump continued: “I’ll say it again: What have you got to lose? Take this. I really think they should take it… I think people should – if it was me – maybe I’d do it anyway. I can take it. OKAY? I can take it. And I’ll have to ask my doctors about that, but I can take it.”

There is no clear evidence that hydroxychloroquine — and the closely related drug chloroquine — are effective in treating COVID-19. But there’s clear evidence about the drugs’ risks, including everything from headaches, vomiting, and rashes to vision loss (retinopathy), seizures, hypoglycemia, arrhythmias and fatal heart damage. They may also pose more risks in patients with underlying health conditions, such as diabetes and liver disease.

It’s also unclear how hydroxychloroquine and chloroquine could hypothetically help fight COVID-19 infection. Early experiments with both chloroquine and hydroxychloroquine suggested the drugs blocked the novel coronavirus — SARS-CoV-2 — from infecting monkey cells grown in petri dishes. The data indicates antiviral activity, but such data is extremely preliminary in determining whether a drug would be effective against a virus that infects an entire human being.

There is also hope that hydroxychloroquine and chloroquine may be helpful in dampening out of control immune responses. In some critically ill patients with COVID-19, raging immune responses are thought to cause devastating damage to the lungs and other organs. And there’s some reason to believe the drugs could help with this, given their immune-suppressing effects seen in patients with rheumatoid disease, which is characterized by inflammation. Some research has suggested that the drugs work by thwarting the action of certain receptors on human cells that trigger cascades of pro-inflammatory responses. But it’s still not entirely clear how exactly the drugs interact with the immune system — or whether it would be relevant to treating COVID-19.

The potential usefulness of these drugs against COVID-19 is now being explored in numerous clinical trials, including the NIH’s trial that starts this week.

The NIH study is a blinded, randomized, placebo-controlled experiment that aims to enroll 500 adult patients with COVID-19 who are hospitalized or receiving emergency care and are expected to be hospitalized. Researchers will give people randomized to the treatment group two doses of hydroxychloroquine per day for five days. They then track the patients’ results, looking at hospitalization status, oxygen requirement or invasive mechanical ventilation, and death.

The first patients were enrolled this week at Vanderbilt University Medical Center in Nashville. It is one of dozens of medical centers in a network organized by the NIH’s National Heart, Lung and Blood Institute (NHLBI).

Given the rampant excitement surrounding hydroxychloroquine — backed by President Trump — the researchers involved in the trial are feeling the pressure to get results as soon as possible.

“Many US hospitals are currently using hydroxychloroquine as first-line therapy for hospitalized patients with COVID-19, despite extremely limited clinical data supporting its effectiveness,” said Dr. Wesley Self, an emergency medicine physician at Vanderbilt University Medical Center who is leading the trial. in a statement. “Thus, data on hydroxychloroquine for the treatment of COVID-19 is urgently needed to inform clinical practice.”

Amid Trump’s push for hydroxychloroquine, the Food and Drug Administration issued an Emergency Use Authorization late last month to allow doctors to treat patients with COVID-19. The unusual move sparked much opposition from former FDA officials, as reported by the journal Science.

In addition, Trump’s enthusiasm for the drug also reportedly prompted him to bring the issue to the attention of the Centers for Disease Control and Prevention. The agency then released an unprecedented guidance to educate doctors about prescribing chloroquine and hydroxychloroquine for COVID-19, based on anecdotal data.

With widespread use come widespread risks of side effects, according to Dr. Peter Lurie, a physician and former FDA director under Obama and Trump, who spoke to Science. “Which is pretty certain: when you expose large numbers of people to [hydroxychloroquine], there will be significant adverse effects. That may be acceptable in the context of known benefits, but it is harder to accept if there are none now and there may never be evidence of benefit,” he said. Lurie now heads the advocacy group Center for Science in the Public Interest.

Experts also worry that the availability of the drugs could undermine clinical trials trying to get that evidence. Availability of the drug could perhaps dissuade patients from participating in studies in which they are randomly assigned to a placebo rather than what they see as a promising treatment that is already accessible.

In addition, there is growing concern that increasing interest in these drugs is creating life-threatening shortages for patients with rheumatoid conditions, such as lupus, who rely on them for proven benefits.

Along with all the concerns, the recoil and pushback have increased. In a March 31 op-ed, researchers urged their colleagues to protect patients with rheumatoid disease and avoid misuse of hydroxychloroquine and chloroquine. They added: “Public figures should refrain from promoting unproven therapies to the public and instead provide clear messages about the uncertainties we face in the testing and use of experimental treatments during the current pandemic, including the risk of serious side effects.”

Earlier this week, Reuters reported that the CDC has removed unusual guidelines for doctors treating COVID-19 patients. The CDC website now correctly states, “There are no drugs or other therapies approved by the U.S. Food and Drug Administration to prevent or treat COVID-19.”

Likewise, criticism has continued to mount against a very small, flawed French trial that claimed to provide evidence that a combination of hydroxychloroquine and azithromycin could treat COVID-19 — a trial promoted by Trump. Among other issues, data was jettisoned during the trial on participants who got worse from treatment, including three who were admitted to intensive care, one who stopped the trial because of side effects, and one who died.

In an initial statement on April 3, the medical association behind the journal that published the study said the association “shares concerns” about the article, which “does not meet the Society’s expected standard.” The society later updated the statement to note that the study is undergoing an additional review and raised the possibility that it might withdraw the study altogether after the review was completed.

Meanwhile, the NIH study and dozens of others are trying to get solid data on the use of hydroxychloroquine and chloroquine for COVID-19. Among them is an international trial organized by the World Health Organization called the Solidarity Trial to test the drugs, as well as three other treatment candidates.