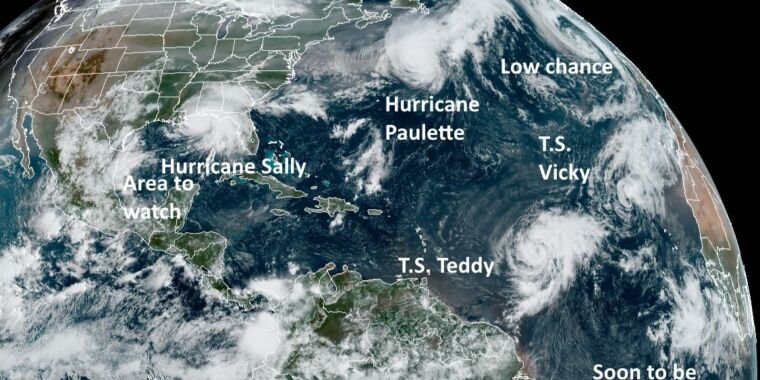 It’s September 15, with more than two months left in the Atlantic hurricane season, and there’s only one name left in the closet for tropical cyclones: Wilfred. And this storm is likely to form off the coast of Africa in a day or two.

In some ways this has been a really crazy year for Atlantic hurricane activity, and in other ways it was fairly pedestrianized. But before we review climatology, it’s worth focusing on the one storm that is sure to have a direct impact on the United States, Hurricane Sally.

Fortunately, Hurricane Sally has not intensified in the past 12 hours. Instead, it’s weakened somewhat, thanks to wind shear affecting the ability of its low-level and mid-level cores to align perfectly. This wind shear from the west, along with cooler water upwelling deeper into the Gulf, should prevent further strengthening today. The National Hurricane Center predicts the storm will have maximum sustained winds of 85 mph when it makes landfall Wednesday morning along the Alabama coastline.

This is no doubt good news, but it does little to mitigate Sally’s major threat of flooding inland from extremely heavy rainfall. For most of Tuesday, the storm tosses just offshore the coasts of Louisiana, Mississippi and Alabama, and the hurricane center estimates its northward movement at just 2 mph. This is almost a low in terms of storm movements over the northern Gulf of Mexico.

Any time a tropical storm or hurricane moves so slowly, the most severe thunderstorms can line up, near stationary, and send flooding inland. For now, the strongest bands are just offshore, but they should be heading inland today. Hurricane center forecasters predict that “historic, life-threatening” flash flooding will occur along and just inland from the coast, from southern Mississippi to the western parts of the Florida Panhandle.

Sally probably won’t cause the kind of ultra-devastating flooding that Texas saw in 2017 from Hurricane Harvey and 2019 from Tropical Storm Imelda. For parts of Houston and Beaumont, these storms brought more than four feet of rain. But widespread areas of 10 to 20 inches are likely along the northern Gulf coast, with isolated totals of 25 inches or higher possible before the storm lifts northeast in response to a trough of low pressure over the eastern United States.

As Sally heads inland, it will bring heavy rainfall over part of Alabama and North Georgia. It’s gonna be a mess.

Unless Sally weakens unexpectedly, it will become the fourth hurricane to make landfall in the continental United States this year, after Hanna, Isaias and Laura. The record for hurricane landfalls in a year is five, which happened once, in 2005. That was a season that included the powerful Katrina, Rita, and Wilma systems.

This year could also compete with 2005 in terms of the total number of “named” storms that are forming, that is, those storms that reach at least tropical storm status with sustained winds of 39 mph or more. The year 2005 holds the current record, with 28 named storms. So far, 2020 has 20 named storms, after Tropical Storm Vicky formed on Monday.

Vicky formed 21 days ahead of 2005’s 20th named storm, Tammy, so this year is on track to break the record. After Wilfred, forecasters will start using the Greek alphabet to name storms.

However active this season has been, according to some measures it is a fairly standard year. In terms of “hurricane days,” which measures the total number of days of active hurricanes, as well as “major hurricane days,” and major hurricanes themselves, this year has seen activity even below normal. This suggests that most storms have been fairly weak or short-lived, or both.

In terms of threats to the United States, none of the systems currently operating outside of Sally appear to pose a direct threat. However, after Hurricane Paulette has already hit Bermuda, Tropical Storm Teddy could threaten the island as a major hurricane early next week.