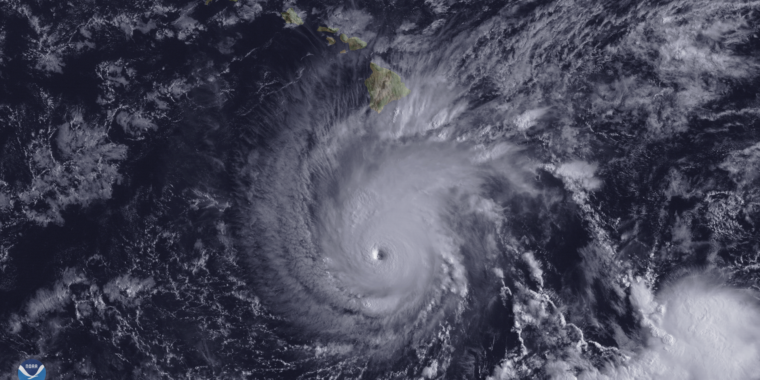 As for the track, it looks like Lane will likely make a northward turn later in the forecast, which will likely—but not yet be sure—keep the center away from the Hawaiian Islands. The latest track update from the Central Pacific Hurricane Center in Honolulu is shown below.

Due to the revised orbit, winds are now a little less of a concern for Hawaii. The chances of all major cities on the islands experiencing hurricane-force winds are now less than 20 percent. Prolonged rainfall and life-threatening flash flooding will remain the main concern for Lane in the coming days.

Original mail: For Hawaii, the “big one” came in 1992 when Hurricane Iniki hit the island of Kauai as a Category 4 storm, causing $3.2 billion in damage and killing six people. This remains the costliest and deadliest storm to hit the islands in recorded history, and only two other hurricanes — an unnamed storm in 1871 and Dot in 1959 — have hit a Hawaiian island during that time. (Several readers have mentioned Hurricane Iwa, but the center of this storm passed just north of the islands).

Just about 20 degrees north of the equator, Hawaii is well within the tropics, so we might expect hurricanes to hit there more often. However, deep gullies in the Pacific Ocean near the islands facilitate the upwelling of significantly cooler water. Typically, sea temperatures near Hawaii are just below the 26.5 degrees Celsius threshold favorable for hurricane formation and intensification. This year, however, sea surface temperatures are about 0.5 to 1.0 degrees higher than normal near the islands.

Unfortunately, this has increased the Hawaiian Islands’ vulnerability to hurricanes this year. Earlier this month, Category 4 Hurricane Hector appeared to threaten the islands for a few days, but eventually its track continued several hundred miles south. Now, another major hurricane, Lane, appears to be significantly more likely to have significant effects on the islands.

Over the last day or so, the forecasting models have a tendency toward a more northerly orbit that would take Lane west and then northwest, before turning due north toward the Hawaiian Islands on Thursday or Friday. So far, the US-based Global Forecasting System (GFS) model has been the most consistent in terms of sticking to this path, which is increasingly likely.

As of Tuesday afternoon, the islands of Molokai, Lanai, Maui, and the Big Island are all under hurricane watch.

In addition to the official forecast, some of the individual model solutions are listed below. It’s important to remember that, even on three or four days out, there can be significant errors in job prediction. That’s especially the case with Lane because of the uncertainty surrounding the interaction with the trade wind flow around the Hawaiian Island and the interaction with the terrain itself, especially Mauna Kea on the Big Island.

If there’s any good news, it’s that wind shear is expected to increase over the islands later on Thursday or Friday, which should weaken the storm significantly. Some of the forecast models, such as the HMON hurricane model below, show significant attenuation before reaching the Hawaiian Islands. For a storm that currently has 255 mph winds (as of 2 p.m. ET, 1600 UTC), Hawaii needs as much weakening as possible.

As the seas continue to warm, it looks like Hawaii will increasingly fall in the path of storms like Hector and Lane. Due to climate change, the likely range of hurricanes in the central Pacific should extend further north as sea surface warming counteracts the effects of cold water upwelling.