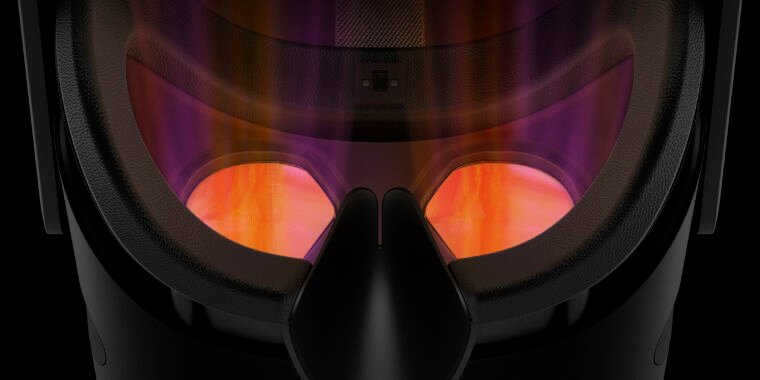 We’re still waiting to test HP’s next PC VR headset, the $600 HP G2, but before it ships to pre-order customers in November, HP has already unveiled its next VR sales pitch. And it’s a biometric tracking doozy.

The HP G2 Omnicept Edition offers everything you’ll find in the G2, including a pair of high-res, fast-switching LCD displays; an “inside-out” tracking solution; lenses, speakers, and other optimizations borrowed from Valve Index; and HP’s updated version of the Windows Mixed Reality controllers.

But this higher version, which has a vague “Spring 2021” launch window and no price yet, is aimed entirely at enterprise customers with a wealth of built-in sensors. These include: eye tracking and pupillometry sensors, to separately determine your gaze and moment-to-moment dilation; a heart rate sensor; and a camera for capturing faces, to translate what you look like to other users. (HP hasn’t shown us how that face-capturing system will work yet, and has confirmed that some of the device’s features won’t be part of the Omnicept launch SDK.)

HP made sure that the potential of these sensors was not tied to consumer-level entertainment options, such as games or watching movies. Instead, the company’s PR team talked mainly about this headset as a useful solution for training exercises, with a not-so-subtle nudge about how virtualized versions of intense scenarios can be useful during our ongoing quarantine era. (Without a fixed launch window, though, there’s no telling if we’ll see the G2 Omnicept ahead of a working COVID-19 vaccine.)

Before I could voice my timely concerns, HP shoved a slide in my face with three privacy-focused bullet points. First, the HP Omnicept SDK, which provides developers with the full suite of APIs needed to capture and translate biometric data, was developed with GDPR compliance at its core. Second, HP’s cloud infrastructure offering promises to enterprise-grade Omnicept customers to “de-identify, merge and secure” all user data it processes.

Finally, HP says the headset itself “secures data during capture within a legal framework that complies with the GDPR, and no data is stored on the headset.” That still leaves the data processing to individual companies handing these headsets and their compatible training apps to staffers and students — and deciding what to do with the wealth of personal information, especially emotional responses (as tracked by heart rate and student sensors), collected. through a series of training sequences or tests.

“Privacy was the beginning of the” [Omnicept] conversations,” said Jeremy Bailenson, founder and director of the Virtual Human Interaction Lab, of Omnicept’s rollout as a product line, claiming the company will “open up” data that scientists can access regarding how G2 Omnicept’s sensors work, though exactly what data will roll out and how remains to be seen.

“Don’t do much” for gamers

HP product manager Scott Rawlings claims that the Omnicept SDK goes so far as to provide developers with “cognitive load APIs.” As an example, Rawlings described a scenario where trainers can understand how stressed someone can be when performing difficult simulations, such as piloting an airplane through 60 MPH winds, or to monitor the effectiveness of a training regimen by assessing an engineer’s mental state. see improvement after practice and receiving further instruction. It didn’t take long for me to think about the potential harm that could come from employers who, of course, have accurate data on staffers’ cognitive load.

A less scary bonus of the eye-tracking system (as provided by Tobii) is that it opens up HP G2 Omnicept’s support for “foveated rendering”. The Omnicept SDK can “follow the direction of the eye” and adjust 3D rendering on-the-fly to blur a VR user’s pixels not directly and thus make performance more efficient. HP says this part of its SDK will be open to developers in general, which could be good news for future headsets or third-party eye-tracking systems added to existing headsets.

See all the comments above about training and employees? That’s intentional. HP has made it clear that the headset will not target the consumer market, which seems as much an indication of its retail plan (read: less partnership with retailers, more of a case-by-case sales base with corporate customers) as its likely price window (read: higher than the $600 G2). “Except [customers] have software that supports this functionality, [Omnicept’s special features] won’t mean much to them,” Rawlings says of the potential to buy this as a gaming headset (although it supports SteamVR by default).