How Turtles Use Temperature to Determine Their Sex | Techilink 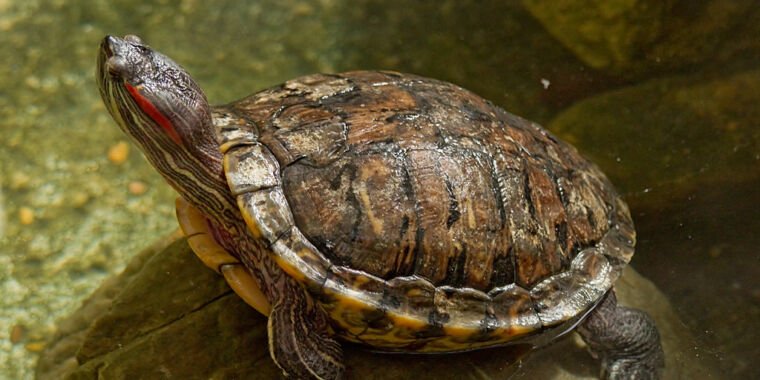 A global pandemic is underway on a scale not seen in about a century. So we decided this would be the perfect time to talk about turtle sex. Not turtles having sex, which is undoubtedly an interesting geometric problem, but rather the process by which turtles develop as male or female.

That process is interesting because, at least from our XY chromosomal perspective, it seems to be a bit haphazard: Turtles and many other reptiles determine their sex based on the ambient temperature. At elevated temperatures, most eggs will develop as female; at lower temperatures most eggs will develop as males. We don’t really know how they record temperature and somehow translate it into a complex program of anatomical development. But a new article in Science fills in some of our gaps.

Sex, of the less interesting kind

When pressed, most of us can remember that sex determination in humans involves the X and Y chromosomes. But it’s often overlooked how things get very complicated downstream from this simple signal. A gene on the Y chromosome turns out to be crucial to register which chromosome combination someone has. A specific tissue interprets the presence or absence of that gene to start a cascade of hormones that reshape the way tissues develop and continue to affect things throughout a person’s life.

(This is ignoring all the things that can happen during this process and produce a non-binary result.)

A signal is therefore not enough to simply indicate to which gender you should develop. The signal must be significant enough to trigger a large program of changes in response.

Despite that seemingly strict requirement, biology has found a bewildering variety of ways to handle sex. To give just one example, fruit flies also have X and Y chromosomes, but you can get rid of the Y chromosome and males will usually develop normally. And instead of having a hormone to pull every cell in the body in the same direction, each individual cell in the fly finds out which chromosomes it has without consulting its neighbors.

Compared to chromosomes, which are quite stable, it is difficult to see how temperature can act to establish a binary state. Turtle eggs are left in the environment, where temperatures vary over time. That variation occurs over the long term, as incubation can occur during changing seasons; medium term, due to diurnal changes in temperature; and short term, with temperatures rising in the morning and falling at night. Somehow, all that has to be turned into a fairly binary decision. For turtles, that conversion happens in a way that has strong parallels to humans. The signal is read by cells that form the animal’s gonads, which produce hormones that direct the turtle’s development.

So how does this tissue register temperature? Over the past few years, we’ve started getting a hint thanks to studies of a turtle species called the red-eared slider. Above 30°C most red-eared slider eggs will develop as females, while at 26°C and below a clutch of eggs will usually develop as males. These eggs can be raised in a lab, allowing researchers to poke at the pathway that determines their sex.

Some love it when it’s hot

The key to figuring this out turned out to be evolution. This is a bit surprising, since we mentioned above that evolution has produced animals that handle sex determination in a huge variety of ways. However, despite that variety, many of these animals use part of a core set of genes during the sex determination process. One is called doublesex, after the fruit fly version of the gene. In 2017, researchers found that the version of the double-sex gene in the red-eared slider could promote male development.

At this point, however, the researchers were a bit lucky. Kdm6b is involved in many processes in other species. In one case, the researchers found two papers that identified a regulator of Kdm6b† But that regulation takes place in cancer cells and immune cells in mammals. There is no reason to believe that the same relationship would hold true when determining the sex of turtles.

But amazingly, it did.

The researchers identified the turtle version of the regulator, stat3, and showed that it could block the activity of the male determinant pathway. And they found that proteins were made from them in the gonads, regardless of temperature. But it was more often converted to an active form (by adding chemical compounds with phosphates) at the high temperatures that trigger female development. The activity of blocking stat3 led to activation of the male-specific pathway even at elevated temperatures.

in one way or another, stat3 is specifically activated by high temperatures and, once active, blocks the pathway that initiates male development. That activation is driven by the chemical coupling of the stat3 protein to phosphates. So what controls the phosphate addition?

Here too, evolution provided the answer. In some situations, having more calcium in the cells will lead to: stat3 to be activated. Again, there’s no reason to expect this to happen to turtles too. But the authors found out. And they went on to show that the calcium levels in the gonads change with temperature differences. Ultimately, it appears that the developing turtle registers its temperature by changes in the amount of calcium present.

While this work goes a long way toward merging the pathway that changes temperature in sex determination, it still leaves a crucial step a mystery: What causes cells to accumulate calcium at certain temperatures? Fortunately, there are a number of candidates: proteins that control the flow of ions in and out of cells. It is probably only a matter of time before the entire process is worked out.

Obviously, understanding this path will not help us cure cancer or anything like that. But it’s an intriguing example of how a variable environmental signal can be converted into an essentially permanent change in gene activity — something that seems to happen in humans, such as when they’re exposed to sustained stress. And as climate change begins to alter the temperatures of turtle habitats, understanding this pathway could potentially contribute to conservation approaches. So it’s not exactly esoteric science for science either.