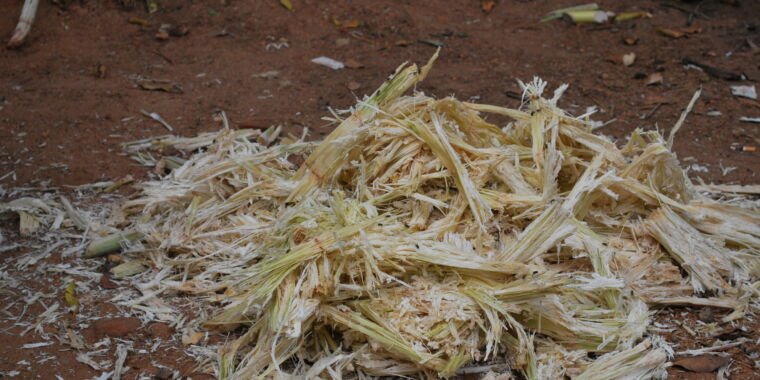 While most plastics are generally produced from petroleum, that is not an inherent requirement. Chemistry is chemistry, and it is possible to grow many of the hydrocarbons we need. But crops are the things we do best, and plastic made from crops can be a problem. They tend to cost more, and unless we’re willing to accept effects on our ability to grow food, pathways to bioplastics have to be pretty smart about their source materials.

A new study led by Long Jiang, Abigail Gonzalez-Diaz and Janie Ling-Chin of the University of Durham explains a way to make plastic bottles from organic waste material and CO2 captured from power plants. A thorough analysis of the economics shows that this process can even be cost-competitive for making things like plastic bottles.

The process could start with something like the leftover plant material from sugarcane pressing. After a few reaction steps, including the addition of some captured CO2 and some ethylene glycol produced from corn plants, you’d end up with a plastic polymer called polyethylene furandicarboxylate — otherwise known as PEF. Functionally, it is similar to the PET plastic used for water and soda bottles, denoted by the number 1 recycling symbol.

Each step in the process has at least been demonstrated before, and some are quite common, so the paper doesn’t spend a lot of space on the chemistry. Instead, the researchers are doing a life cycle analysis of the manufacturing process to estimate exactly how this method of making PEF would stack up against the competition.

That includes greenhouse gas emissions. Compared to the production of PET, their PEF process emits about a third less greenhouse gas. This assumes that the heat and electricity needed for production comes from natural gas rather than renewable alternatives. But the process itself involves the consumption of some captured CO2which offsets part of the emissions.

Interestingly, other proposed methods of making PEF are actually associated with lower emissions than that. However, these methods rely on using dietary sugars rather than leftover plant material — something the researchers wanted to avoid.

Aside from the benefits of durability, the costs of this process seem to put it at a superficial level. The study estimates that we can make PEF at about $2,400 per ton, while conventional PET is produced at $1,800 per ton. This would mean that PEF has to earn a premium on the market in order to be profitable as a company.

But there’s one more thing to consider: you could very well make a PEF bottle with 25 percent less plastic. While PEF and PET have enough similar properties to fit into the same niche, PEF is slightly sturdier. “As such, the PEF production cost per bottle may be the same or lower than PET,” the researchers write.

So it is at least possible that an approach like this is commercially viable, especially if cost savings are found along the way. Then you might see cane-derived bottles containing your carbonated sugar solution.