How to disable a quasar | Techilink 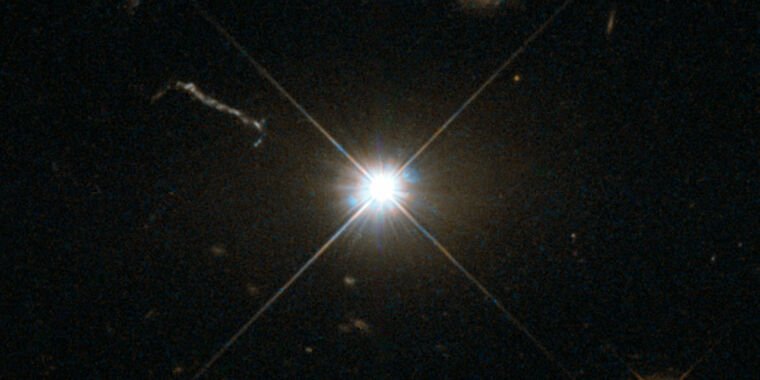 Obviously, taking a regular galaxy and turning it into an active galaxy isn’t as simple as hitting a light switch. Modeling has suggested that activating a galaxy’s central black hole (and thus the galaxy as a whole) may be part of the process of galaxy formation, which occurs due to the merging of smaller galaxies through collisions. These collisions could cause gas to swirl around the galaxy, creating densities in the core high enough to activate the black hole. Now another study suggests that these collisions could also knock out the black hole — it all depends on the details of the geometry.

A donut by the hole

To understand how this works, you need to understand the environment around a black hole. While much attention is paid to the reality-bending gravitational pull of the black hole’s event horizon, anything that actually affects the surrounding universe takes place a short distance from that location. There, the black hole’s gravity organizes all infalling matter into a flattened disk that feeds matter into the black hole, called an accretion disk, with the black hole at the center. Furthermore, a more diffuse, doughnut-shaped cloud of gas enters this disk.

This organization is needed to efficiently introduce matter into the black hole. Collisions in the incident material produce radiation that would otherwise expel all the material. And it is this efficient power supply that is believed to be necessary to power the jets that create active galaxies.

To some extent, this is all self-organizing. Push enough gas toward the center of the galaxy and it will eventually form the donut (technically a toroid core) and start feeding the black hole gas. And previous models had shown that galaxy collisions are capable of this. All galaxies have clouds of gas of varying densities scattered across their disks. The perturbations caused by a collision have the potential to rearrange these clouds and send them closer to the galactic core, where the material can be captured by the black hole’s gravity.

This doesn’t happen in all cases, though, and a group of Japanese researchers — Yohei Miki, Masao Mori, and Toshihiro Kawaguchi — were intrigued by some instances where signs of recent collisions were present in galaxies that were inactive. Some of these even had indications that the black hole had come to a standstill relatively recently, suggesting that the collision and the shutdown may be related.

Our nearest large neighbor, the M31 Andromeda galaxy, is inactive, and it also has a feature called the giant south stream, which appears to be the remains of a small galaxy that collided with it. Because we understand the details of Andromeda better because of its proximity and modeled that collision in some detail, the researchers decided to look at the effect it could have on the central black hole.

The modeling showed that if the dwarf galaxy rushes into Andromeda’s center, it has the potential to disrupt the donut of gas that feeds the black hole. Whether it does or not depends on the relative densities of the gas in the galaxy and the gas in the donut. As long as the density is higher in the incoming galaxy, the torus should be disturbed. Essentially, the disorganized incoming gas will transfer some of its momentum to the gas orbiting the black hole, expelling it. The result is a chaotic mess that cannot feed the black hole efficiently.

The researchers note that while the density of the gas alone is enough to suffocate the black hole, geometry may also matter. If the incoming galaxy were to hit from the side, its full width would pass through the region of Andromeda’s central black hole, producing a more disruptive force. If, on the other hand, the gas density in the galactic core is high enough, the incoming galaxy will not be able to disturb it.

All of this is happening quite quickly, at least in galactic terms, and it only takes about a million years to silence the active black hole.

The authors went beyond the specific conditions in Andromeda and used averages of the number of small galaxies near large and the apparent frequency of collisions to calculate how often one of these collisions could occur. They estimate that, on average, a typical galaxy should happen about every 100 million years. That’s just an average though; some active galaxies could go much longer before colliding with the correct configuration.