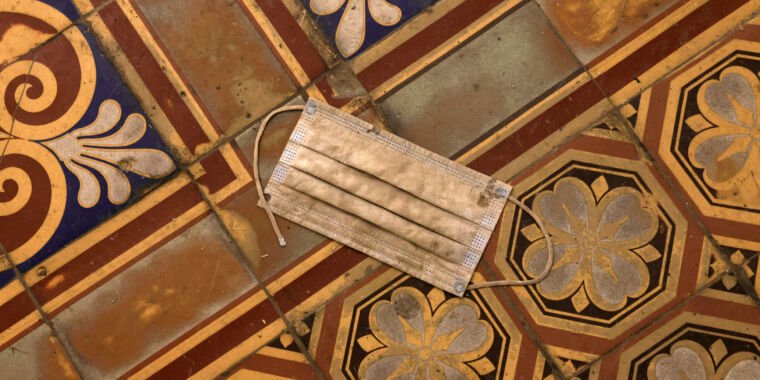 Yesterday’s outrageous and violent uprising will be one of the darkest moments in American history. But it could also be yet another obscure point in the ongoing pandemic, which – in case you get distracted – is still spiraling out of control and ravaging much of the country.

When agitators entered the United States Capitol on Wednesday, health officials across the country registered more than 243,000 new cases of COVID-19. Hospitals counted nearly 132,500 COVID-19 patients in their beds. And at least 3,793 Americans lost their lives to the pandemic virus. Wave after wave of disease has infected more than 21 million people in the US and killed more than 352,000 loved ones.

Fuel on the inferno

The pandemic didn’t end on Wednesday for those in the District of Columbia. Like many places, Washington has seen an increase in cases and deaths during the winter holidays. During the president’s uprising, the capital reported 316 new cases — a sharp increase from the seven-day moving average of 86 new cases per day recorded on Nov. 1. There were also five new deaths on Wednesday, up from an average of November 1. In all, the city of more than 700,000 inhabitants has reported a total of nearly 30,500 cases and more than 800 deaths since the start of the pandemic.

Yesterday’s event will only help sustain the current surge in DC and elsewhere. Thousands of Trump supporters gathered nearby to listen to the crippled president and others encourage the agitation. Many in the crowd were not wearing masks. And while they were outside, the extended huddle in a dense, maskless crowd certainly creates the opportunity for the pandemic coronavirus, SARS-CoV-2, to float easily among people, infecting some and ensuring the pandemic lives on.

Being outdoors is often seen as inherently safe, but that’s about it safer. The vast, stirring air of air can more easily spread any virus-causing respiratory droplets that float or shoot from an infected person’s face. This is in contrast to crowded and/or poorly ventilated indoor areas where droplets are less likely to be swept away, potentially allowing them to accumulate to higher concentrations, increasing the risk of infection for those in the room. We still don’t know exactly how many virus particles it takes to infect a person, but higher concentrations are definitely riskier.

Still, being outdoors doesn’t mean the virus can’t spread, especially when mask-less people are crammed into a dense, stationary crowd. Being outdoors or in a well-ventilated area are just a few layers of the multi-layered approach needed to reduce the risk of spreading the virus. People, even outdoors, should wear masks, keep physical distance, avoid crowded areas and practice good hand hygiene. That was certainly not the case at the Trump rally yesterday, as it was at previous rallies, which have also been linked to mass spread of the virus.

Trump’s supporters further increased the risks, openly mocking and revolting against public health measures and the reality of the pandemic as they gathered in the city ahead of Wednesday’s events. In a Tuesday protest, a Trump supporter encouraged people to actively try to spread disease, encouraging them to: hugging people outside their household: “I’m going to give everyone three action steps… turn to the person next to you and give them a hug,” one speaker told a crowd. “Someone you don’t know… it’s a mass-spreading event! It’s a mass-spreading event!”

While the “close contact” associated with the spread of COVID-19 is often defined as being within 6 feet of someone for 15 minutes or more, nothing magical happens at the 6-foot or 15-minute mark. These are just rules of thumb for risk assessment. Depending on the nature of the interaction and the infectiousness of an infected person at the time, people can become infected in shorter time frames or even over slightly longer distances. As such, public health experts generally advise against cuddling.

“It’s terrible to think we’d be here if the World Health Organization tells people, ‘Don’t hug each other,'” Michael Ryan, executive director of the WHO’s emergency program, said in a news conference last month. “It’s terrible. But that’s the brutal reality now in places like the United States.”

As hundreds of insurgents broke into the Capitol, the heightened risks spread to lawmakers and their staff. As chaos, violence and looting followed, lawmakers and staff tried to get to safety. Rep. Susan Wild (D-Pa.) told CBS News that when she was evacuated — after shots were fired into the building — she was moved to a crowded, secret location with 300 to 400 other evacuees. Her fears then moved from the violence to the coronavirus. “It’s what I would call a COVID super spreader event,” Wild said.

“About half of the people in the room aren’t wearing a mask, even though they’ve been offered surgical masks, they’ve refused to wear them.” She identified the maskless crowd as some “people of the Republican delegation… some of the newer members who are freshmen this year are openly showing off that they won’t wear a mask and refusing to put on a mask… It’s just the kind of the situation the doctors have told us we shouldn’t be in.”

She added that congressmen did not require regular testing for COVID-19, but that testing was available to them. As of yesterday, at least two members of Congress have announced that they have tested positive for SARS-CoV-2. Rep. Jake LaTurner (R-Kan.) got a positive test Wednesday night, according to: a Thursday tweet from his verified account† Rep. Michelle Steel (R-Calif.) also announced that she had tested positive. Steel, who was sworn in on Sunday, had expressed skepticism about the need for mask mandates.

Since the start of the pandemic, dozens of federal lawmakers and hundreds of their employees have contracted the virus, with many more exposed and quarantined. On December 29, Congresswoman elected Luke Letlow (R-La.) died of COVID-19 at age 41.