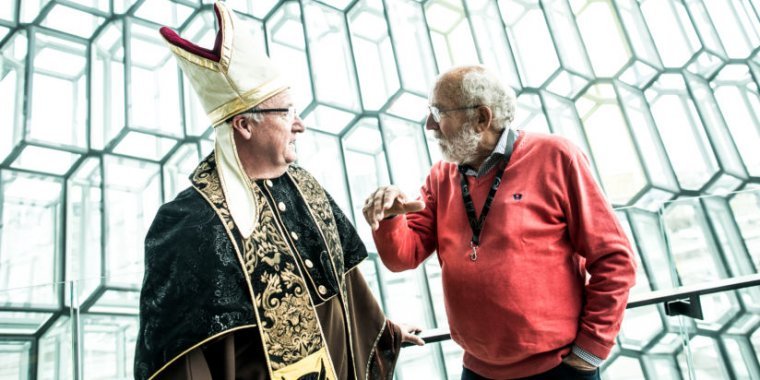 In Reykjavik’s bustling Harpa Exhibition Center, players from Eve online– an RPG in which millions of players explore the depths of space through trade, combat and propaganda – are told they can change the world. In other years, visitors to the annual Eve Fanfest convention gather to meet online friends from the other side of the world, forge loyalties and start in-game wars during the surprisingly boisterous pub crawl. But this is no ordinary year. This year, Fanfest’s main stage will host Kyoto award-winning scientist, Dr. Michael Mayor.

Famous for discovering the first-ever exoplanet in 1995, Dr. Mayor for the first time a different career at Eve Fanfest. Mayor has swapped his usual audience of astronomy students for gaming’s most notoriously devoted community — and despite some early reservations, they’re taking in every word. Mayor explains the science behind it Project discoverya mishmash of smart software and stat-grinding that crowdsources scientific research from players of Eve online. His speech is heard not only in the crowded room, but also by thousands of curious viewers on Twitch. If nothing else, it’s a clever piece of scientific reach.

Like many ideas, Project discovery started life in a bar, where Hungarian software engineer Attila Szantner asked university researcher Bernard Revaz a question: what if video games could make the world a better place instead of just entertaining? Starting with the concept of citizen science – a research method that uses data collected by ordinary citizens – Szantner mused that, as the world’s most dedicated workers, gamers would be the ideal candidate for a new kind of scientific research.

Three years later, Szantner and Revaz turned their idea into a piece of software. Dubbed Massively Multiplayer Online Science, or MMOS for short, the software takes scientific data from the real world and feeds it directly into games for study. In the past year, MMOS has been used to make thousands Eve players in a well-oiled scientific research team. As a gamer himself, Szantner saw that the stat-grinding is so loved by Eve players would be invaluable to the scientific community.

“Most games already have elements that are boring, repetitive tasks,” says Szantner, “but we like doing them. This is especially true in Eve. [Eve developer] CCP has been doing this for 14 years. It knows how to keep people engaged and entertained. We knew that right away Eve would be the perfect partner.”

The first iteration of Project discovery focused on the Human Protein Atlas, a scientific research program with the aim of exploring the human proteome. Eve players were asked to put their conflicts aside and help scientists understand the role of proteins in the body, as expressed by a cell, tissue or organism. Turning existing analysis techniques into a fun exercise, players diligently examined images of real cells in the game — where scientists had used antibodies to mark proteins — to pinpoint where a particular protein appeared in each cell.

“If the protein is expressed in a cell such as in mitochondria – which play a role in energy production in the cell – then [researchers] know that it is somehow related to energy production,” explains Szantner. “In cases where there is a problem with [energy production]scientists can then find the corresponding protein.”

MMOS was expected to save researchers a few man-hours, but players have already classified more than 28 million images.

“It’s huge. We are now analyzing the data along with the Human Protein Atlas,” says Szantner with a grin. “We are about to publish the first scientific paper on Project discovery.”

The second phase of Project Discovery will launch later this month. Inspired by the game’s intergalactic setting, researchers recruit Eve‘s space-loving community to discover new planets. By partnering with both the universities of Reykjavik and the universities of Geneva, EveThe latest minigame instructs players to analyze astronomical data captured by the now-defunct COROT space observatory. Players are provided with the brightness curves of stars. Identifying a change in a star’s brightness earns them an in-game reward, while also potentially signaling to scientists that an undiscovered planet has passed in front of the star.