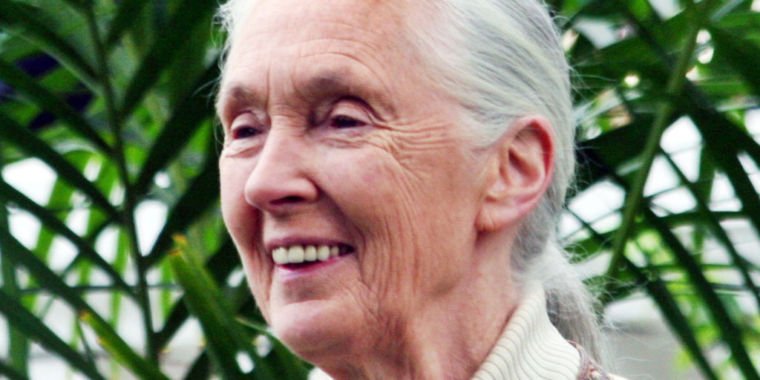 Jane Goodall is an exceptional figure in many ways. Starting with no formal training and using controversial methods, she made astonishing breakthroughs in understanding chimpanzee social behavior and thus understanding ourselves. She managed to become an extremely rare species: a scientist who was also a media darling. And having devoted many years of her life to her research (at considerable personal sacrifice), she left it behind to become a global spokesperson for sustainable development and conservation.

How did that happen? That’s the subject of a new National Geographic documentary Jane. The film is based primarily on recently rediscovered footage filmed by renowned wildlife filmmaker Hugo van Lawick, who was commissioned by National Geographic to film Goodall’s fieldwork. van Lawick was there to record a major transition in Goodall’s research and led one in her personal life: the two would eventually marry and have a son.

While it was a pivotal time and the original footage is stunning, it offers a limited view of Goodall’s history. Other crucial events pass in a flash or are skipped altogether. Whether that bothers you is probably a major determinant of how much you’ll enjoy it Jane.

Goodall’s career in research was a product of her childhood dream of living in Africa. That brought her to Kenya, where she applied for a job as a secretary to famed palaeontologist Louis Leakey. But Leakey actually had other plans. His study of fossils helped outline the evolution of our species. But to understand our behavior we would have to study our close relatives – and Leakey didn’t want it to be someone already biased by current academic thinking. So he offered the job to Goodall, who jumped at the opportunity.

National Geographic funded Goodall’s work and hired Van Lawick to film it. He was there to record Goodall’s repeated failures, as chimpanzees fled whenever she got close. But he also captured footage as chimpanzees began to treat the field camp as a source of food, accustoming them to a human presence. Goodall encouraged them by setting up feeding stations and became attached enough to her subjects to give them names and recognize their personalities.

All this was controversial. Goodall is right that she probably wouldn’t have gotten close enough to understand the chimpanzees’ social dynamics without interfering. But her intervention has undoubtedly changed their social dynamics. Goodall also argues that it is foolish not to recognize that animals have personalities, which is true. But that can also be a problem for researchers, who can bias their data collection if they don’t treat animals as abstract subjects. However, this is all told from Goodall’s perspective, so the film is a bit one-sided.

There are hints everywhere that Goodall, hired specifically because she was an amateur, has been upping her science game. Scenes are interspersed with detailed tracings of the chimpanzees’ movements through their habitat and extensive tables of individual behavior – solid, raw scientific data. We asked Goodall how this happened, and she attributed it to her time doing her PhD at Cambridge, something the film never mentions.

For Van Lawick, Goodall was not just a subject. Over time, they fell in love, eventually got married and had a son. All this was seemingly integrated into their work – filming and research – with minor interruptions. But in the end, National Geographic decided it had all the movies it needed. To continue the work he loved, van Lawick would have to move elsewhere. van Lawick was a real talent, as the film makes clear. While Jane lacks the incredible sharpness of modern high-definition wildlife films, van Lawick’s images are warm and rich in color, with amazing lighting and shooting composition.

So it’s no shock to find that he’s taken off with his career and moved to the Serengeti. Goodall also stuck to her career and brought the marriage to an end. Their son, meanwhile, was sent back to the UK for his education.

With no more original footage to work with, the years begin to fly by. And seemingly suddenly, after giving up her family to continue her research, Goodall decides to abandon her research to become a global conservation advocate. For such an intelligent individual, there was clearly a lot behind this decision. But the public is guessing.

So Jane is not a full biopic; instead, it records the time Goodall and van Lawick shared at her research station. But it happens to be an incredibly pivotal period in her research there, meaning it was a critical time for our understanding of chimpanzee behavior and therefore our own evolutionary legacy. The fact that van Lawick was there to record Goodall’s discoveries was immensely fortunate. The fact that Goodall fell in love with him during this time, rather than being a distraction, gives a rare glimpse of a scientist as a complete person.