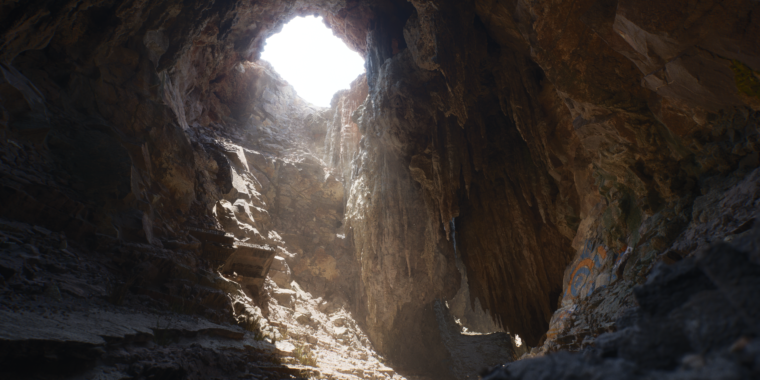 After last week’s somewhat blasé showcase of in-development Xbox Series X software, our expectations for the next generation of new game consoles were somewhat tempered. But those expectations were boosted this week with Epic Games’ unveiling of a breathtaking real-time demo of its Unreal Engine 5 technology.

The engine, which Epic says will launch next year, was shown on PlayStation 5 development hardware, although the company said the same general level of reliability should also be possible on the Xbox Series X and high-end PCs. And it shows how the state-of-the-art in graphics quality on those platforms is rapidly progressing beyond resolution and framerate counts and into new levels of lighting and modeling detail.

The first pillar of Epic’s new engine is what it calls the Lumen system, a “fully dynamic global lighting solution that responds instantly to scene and light changes.”

Those kinds of effects are not so new in the game world. Nvidia has been pushing the real-time ray-tracing capabilities of its PC graphics card line for years, and those effects are currently even making games like Minecraft looks spectacular with the right PC hardware. But we’ve never seen anything like this kind of real-time lighting on console hardware, let alone with what Epic says is “diffuse inter-reflection with infinite bounces and indirect specular reflections.”

Epic says this kind of dynamic lighting will save developers time by eliminating the need to design light maps by hand and wait for the engine to “pre-bake” that static lighting during development, as in today’s engines. Instead, artists can simply place a light source near the engine and immediately see what the game will look like when run on console hardware.

“We’re really trying to empower developers here to create next-generation experiences that are incredibly realistic, as well as economical and practical to create without a 1,000-person team,” said Epic founder and CEO Tim Sweeney in an attached “ Summer Game Fest” interview. to the unveiling of the demo.

Using dynamic lighting also means developers can move light sources more easily during gameplay and see light bend around obstacles in ways that don’t really work with the static light sources found on current engines. Besides just looking nice, Epic sees this kind of lighting lead to new gameplay ideas – a player-held candlelight that bends around a corner to reveal a hidden enemy, for example.

Real-time lighting also means that an entire universe of user-generated content can take advantage of these kinds of effects without any special coding. With Lumen, “things will change after the game’s release,” said Epic CTO Kim Libreri. “Things can grow and change, and all of that can be calculated live.”

While real-time lighting effects are becoming more and more common these days, Unreal Engine 5’s most unique features seem to center around the idea of ​​massive, automatic scalability of in-game art items. What Epic calls the Nanite system is designed in part to reduce the “cost for an artist to create an important new piece of content for a game,” as Sweeney puts it.

In current game design, game artists usually squash their in-game 3D models to a few different levels of detail (LODs), each with fewer polygons and smaller textures than the last. Those low-poly models can be embedded when an object is far away from the in-game camera, saving both memory space and rendering time in complex scenes, without much loss of apparent frame quality.

With Nanite, Epic says artists can instead just import raw “movie-quality” 3D models directly from a library like Quixel Megascans into the engine, without having to specifically design lower LOD models for in-game use. The engine can then automatically create LOD models suitable for the scene and target hardware, from a next-gen console to a mobile phone. The idea, as Epic VP Engineering Nick Penwarden puts it, is to “build content once and deploy it to all devices”.

“The artist doesn’t even have to think about it,” Librri added. “You pick a high-resolution item you want, you load it in, you don’t have to think about creating levels of detail or normal maps or any of the usual things that come with creating game content. It’s quite a liberating experience for anyone trying to tell a story or create an experience.”

On high-end hardware, Epic says the top of those LOD models can now be detailed enough so that each polygon only takes up a single pixel on the screen. At 4K resolutions, that level of “Render Everything Your Eye Sees” detail can require tens of billions of polygons for even a fairly complex scene (though Epic admits the demo drops to 1440p at points to maintain performance).

On existing hardware, putting that many polygons in a frame would overload system memory and exceed the draw count budget needed to render the scene in time for the next frame. Unreal Engine 5 gets around those limitations by leveraging the ultra-fast bulk storage SSDs that will be standard on next-generation consoles.

The idea of ​​streaming graphics content from storage to RAM has been around for decades – the original Crash Bandicoot used that basic method to create environments with 20 to 30 times the level of detail of today’s PlayStation games. In the past, however, such streaming usually involved loading in the next area as the player approached and using game design tricks to hide the “pop-in” effect of that loading from the player.

With ultra-fast SSDs as standard, that concept can now be expanded to stream art assets as the camera pans and pans around a single scene, essentially getting the polygons and textures that players need to catch up with the RAM just in time for rendering. “There are ten or billions of triangles in that scene, and we just can’t have them all in memory at once,” Penwarden said. “Eventually you have to stream in triangles as the camera moves around the environment.”

Freeing developers from “loading data from a spinning mechanical device that originated in the 1950s…will have a much bigger impact on gaming than people now expect,” Sweeney said. “The world of loading screens is over. Gone are the days of geometry popping up in environments.”

(This also means PC players may need to upgrade to high-quality NVMe drives in their gaming rigs to get the best graphics details from future games.)

For now, we’re trying not to get too excited about the potential shown in this short demo. There will likely be some limitations and tradeoffs needed to get from even a playable demo to a full game, complete with AI, physics simulations, multiple animated actors, and more.

It’s also not clear how much storage space is required for these high-quality streaming assets or how large games can fit comfortably on relatively expensive SSD storage. And despite the promise, we’ll have to wait until next year before third-party developers can report on how far the engine lives up to Epic’s “build content once and deploy it to all devices” promise.

That said, this is the first showcase that really got us excited about the potential benefits of next-generation gaming hardware. The improvements in environmental detail, lighting, and loading speed shown here are certainly more interesting than the usual resolution piss-matches and careful frames-per-second splitting that have marked the “advancements” of next-gen gaming in recent years. We can’t wait to see how this potential translates to real games when Unreal Engine 5 actually rolls out to third-party developers next year.