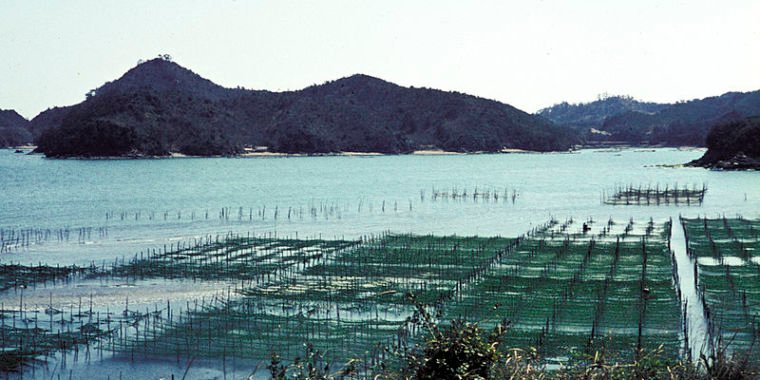 The tasty Japanese seaweed nori is ubiquitous these days, but it wasn’t always that way. Nori was once called “lucky grass” because each year’s harvest depended entirely on luck. Then, during World War II, luck ran out. There would be no nori growing off the coast of Japan and the farmers were distraught. But a major scientific discovery on the other side of the planet revealed something unexpected about the humble plant, turning an unpredictable harvest into a stable and abundant food source.

Nori is most familiar to us when wrapped around sushi. It looks less familiar when it floats in the sea, but for centuries farmers in Japan, China and Korea have known it by sight. Every year they planted bamboo sticks with nets in the seabed on the coast and waited for nori to build up on it.

At first it looks like thin filaments. Then, with luck, it grew into healthy, harvestable plants with long, green leaves. The farmers never saw seeds or seedlings, so no one could grow it. The filaments just appeared every year. That is, they appeared until after World War II, when pollution, industrialization along the coast, and a series of violent typhoons led to a disastrous drop in crops. By 1951, nori production in Japan was all but wiped out.

Fortunately, on an island on the other side of Eurasia, Kathleen Drew-Baker had recently been fired. She taught botany at the University of Manchester, where she studied algae that reproduce using spores rather than flowers. But the university did not employ married women. So when she married fellow academic Henry Wright-Baker, she was kicked out of the faculty and demoted to a job as an unpaid research fellow.

Drew-Baker focused on a type of nori unknown to almost everyone: Porphyra umbilical cord. It is a leafy seaweed that grows off the coast of Wales. The locals harvest it, grind it and use it to make bread or soup. Popularly known as laver, it is still eaten in Britain but has not achieved the international status of nori.

Drew-Baker and her husband built a laboratory by the sea where she could study its life cycle. During her research, she found herself coming across a very different species, known as Conchocelis. Conchocelis is a group of single-celled organisms that look like pink silt and grow on the inside of abandoned shells. Drew-Baker noted that the pink sludge was especially prevalent during the summer months, while the seaweed showed up during the winter months.

Eventually, Drew-Baker realized she was dealing with the plant equivalent of a superhero who is never seen at the same time as his alter ego. These apparently different species were actually the same. They were both a type of algae. In the summer, the leafy green seaweed emitted spores that collected and grew like the pink sludge in shells. In winter, the pink silt emitted spores that collected on debris (and bamboo sticks) and built back up in the seaweed. In 1949 Drew-Baker published a paper in Nature detailing her discovery, “Conchocelis stage in the life history of Porphyra umbilicalis.”

This would have been nothing more than a bit of trivia if it weren’t for a second expert. Back in Japan, Segawa Sokichi of the Shimoda Marine Biological Station read Drew-Baker’s paper and realized that what was true of Welsh seaweed was probably also true of Japanese seaweed. The reason no one had been able to find nori seeds was because they were looking for the wrong plant. And nori had stopped blooming on the coast because of disturbances to the seafloor full of shells where the pink silt liked to grow.

Thanks to Drew-Baker’s work, Segawa was able to invent the industrial process that led to the stable, predictable production of nori, for which anyone with a penchant for sushi should be thankful.

Today, nori farmers leave nothing to chance. They still harvest the leaf stage of the seaweed from the sea. Then technology takes over. Any spores grown by nori’s leaf shape are cut down to an ideal seed length of 0.4mm. To encourage the spores to grow into their single-celled stage, farmers import shells from the oyster fishery, string them on fishing line and hang them in huge vats of water that create the ideal environment for the pink silt to grow.

Chlorine is added to the seawater in the tanks to remove any harmful pathogens. It is filtered with sand to remove contamination. Factory workers control the oxygen levels in the tanks and add precise amounts of magnesium, sodium, iron and potassium. Even the light levels are controlled. Indeed, nori farms only use the bottom shell of oysters because it is smoother and gives more control over the level of light to which the Conchocelis spores are exposed.

As the spores grow, some biological manipulation is also done. Each new batch of spores brought in from the ocean is sampled, cultured and stored. The rate of production and the conditions under which it thrives are noted. As a result, researchers have identified spores that produce seaweed in water with different levels of salinity and different temperatures. With global temperatures rising, it will probably come in handy sooner rather than later to know which spores can survive best in warmer waters.

An agitator stimulates the release of the second set of spores and swirls them around the tanks. Most facilities have agitation status timed to the minute. Then workers put nets in the tanks to ‘seed’. The nets are rolled onto human-sized spools to be sent to farms or kept in freezers until needed. At each stage, they are checked for the quality and concentration of the spores on them. People no longer have to stick bamboo sticks in the ocean and hope for luck.

Drew-Baker’s discovery was the first step toward the industrialization of a form of agriculture that seemingly could not be industrialized. Segawa and countless later innovators in Japan turned an unpredictable harvest into a sure harvest. The application of technology to agriculture, especially this form of farming, has completely changed the game. Even the people involved in nori production have changed. While most fisheries and agriculture are losing workers, nori farming continues to attract young, tech-savvy people. Seventy years after the nori farming industry was seemingly destroyed, it is thriving more than ever before.

Thanks to her many discoveries, Drew-Baker’s career also flourished. Despite her resignation for getting married, she became the first elected president of the British Phycological Society in 1952. Today Drew-Baker is known in Japan as ‘the mother of the sea’ and every year a festival is held in her honor in Uto City.