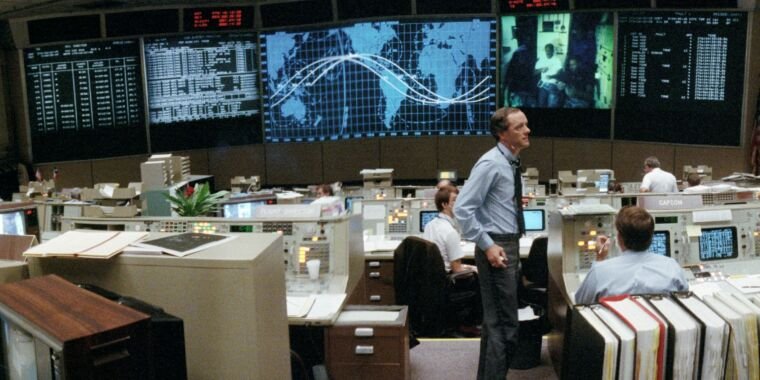 The call from the “Mountain” to Mission Control in Houston came at just about the worst possible time. It was the wee hours of Thanksgiving morning in 1991. Up in space, the crew members aboard the space shuttle Atlantis were sleeping. Now Chief Flight Director Milt Heflin was suddenly faced with a crisis.

The flight dynamics officer at Mission Control informed Heflin that the Cheyenne Mountain Air Force Station, which monitors orbital traffic, had called to warn that a dormant Turkish satellite had a potential connection to the space shuttle in just 15 minutes. In addition, this potential debris impact would occur in the midst of a communications failure with the crew as the spacecraft flew over the southern tip of Africa.

There was no way Heflin’s engineers could calculate an evasive maneuver, wake the crew and communicate with them before the blackout period started. Heflin was furious – why hadn’t the Air Force given more warning of a potential collision? Usually they gave a notice period of about 24 hours. By God, if that satellite hit… Atlantis, they could very well lose the astronauts while they were sleeping. The crew of STS-44 may never wake up.

Heflin was an accomplished flight director who had joined the space agency more than two decades earlier during the Apollo program, conducting oceanic recovery operations after the moon landings. Heflin was largely unflappable. But now he was tense. “When I think about all my time, I can’t remember ever being as nervous or upset about anything as I was then,” he recently told Ars.

What Heflin didn’t know at the time, however, is that he had been snookered by two of his flight controllers on an otherwise boring night shift, during a fairly routine shuttle mission to deploy different Air Force payloads. There was no abandoned satellite—the allusion to “turkey” on Thanksgiving had passed him by. But the story didn’t end there.

In the beginning, NASA wasn’t the buttoned-up space agency it is today. Early on, especially during the Mercury program, NASA decision makers moved quickly, often flying down their pant legs. There was also more room for practical jokes, even within the sanctuary of Mission Control.

In his book The Birth of NASAManfred “Dutch” von Ehrenfried wrote about a legendary joke that happened a few weeks before John Glenn’s first orbital flight, in 1962, atop an Atlas rocket. Chris Kraft, NASA’s legendary first flight director, led his teams through long days and nights of training, simulations and discussions about mission rules for this critical flight.

At the time, missions were planned and managed from the Mercury Control Center at Cape Canaveral Air Force Station, and there were several scrubs leading up to Glenn’s flight. To break the boredom, Kraft’s chief lieutenant, Gene Kranz, decided to prank his boss the next day, when two activities were to take place simultaneously. Kraft would lead a mission simulation, while Kranz would lead a launch pad test with the Atlas rocket. While running the mission simulation, Kranz knew that Kraft would be watching the toad activities on a console television.

Working with John Hatcher, a video support coordinator for the control center, Kranz had an old Atlas launch video replaced with Kraft’s feed. Additionally, Kranz and Hatcher timed it so that the missile appeared to take off immediately after Kraft threw the “Firing Command” switch as part of his simulation.

Here’s how von Ehrenfried typifies what happened next in Florida:

As the simulation progressed, Kraft asked Kranz how the pad test was going and Kranz would give him a quick status check with a straight face and head down. As the simulation headed to launch, at the same time Kraft flipped the switch, Hatcher was launching the old Atlas launch video on Kraft’s console TV. Kraft’s eyes bulged and his forehead wrinkled as he stared at the TV. He turns to Kranz and says, “Did you see that?” Kranz plays dumb and says, “See what?” Without a pause, Kraft says, “The damn thing took off!” Hatcher and Kranz tried to keep their faces tight, but neither could contain the laughter. Kraft says, “Who the hell did this?” Then he realized he had “had” and laughed half-heartedly. Kranz and Hatcher pulled Superman’s Cape and survived!