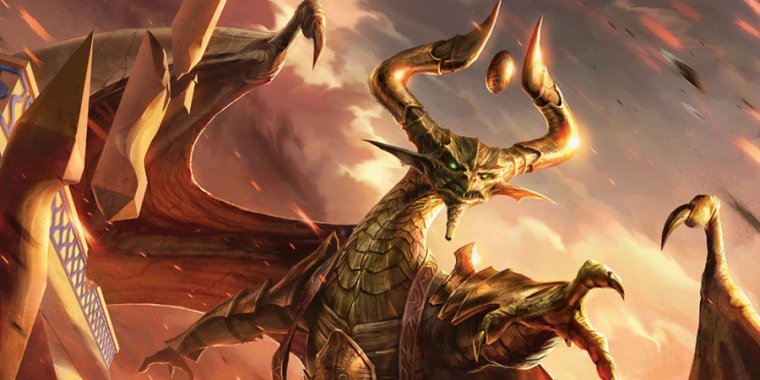 Magic: The meeting has been expanded again with Hour of DevastationA continuation on amonket that continues to riff on Egyptian mythology with a big helping of dragon-led apocalypse. We set up decks, built them and a whole lot Hour of Devastation competitions – read on for our review!

We also cover recent news about the game, including changes to the structure and release cadence, and the future of Magicthe digital offering.

Hour of Devastation (LOVE) is set in the world of Amonkhet (see our review of the original set for more info) as the prophesied “hours” arrive, momentous events that promised glory and eternal life. However, it turns out those events were the machinations of Nicol Bolas, the main antagonist of the set.

Introducing a new world and then bringing it into conflict is a theme repeated by Wizards of the Coast with the large/small set structure of Magic recently so there isn’t much of a “twist” element here to enjoy, but the aesthetic execution is top notch. The gleaming city has become a besieged, panicky landscape, with some classic dark Egyptian tropes taking center stage – the river turning to blood, a plague of locusts, the marauding the living dead. There are also clever references to amonketwith ruined versions of buildings seen on old maps popping up in the art for new maps.

There are also some more unusual themes to help out Magic leaves his own mark on the setting, especially around Nicol Bolas himself, who pops up in much of the set’s lyrics and generally expresses his disdain for all things that aren’t Nicol Bolas. Magic‘s story remains surprisingly good for a card game, and many of the cards depict the main beats – the attack on the city, the killing of the gods we met the previous set, a new zombie army for Bolas, the “Eternals” – and there are long stories Wizards publish online for those who want more background information.

Subsequent sets generally build on the first set mechanically, and LOVE is no exception. Cycling and make an effort are back, immortalize is embalming‘s angry sibling while torment is brand new. There are also a lot of cards that refer to desertsa special type of country that showed up in amonket, but had no previous mechanical relevance.

Cycling is a smooth continuation of the first set, where players can discard a card in exchange for a new card from the deck, for a small fee. This has much the same effect on how much fun the set is: more decision making and less expensive cards that get “stuck” in the hand, meaning more interesting games.

effort, on the other hand, has evolved. While it’s still the same from a rules point of view, some creatures let you make an effort them to gain some sort of extra perk, but in return are not available for your next turn – it’s no longer just the battle boosts we saw in amonket. In LOVEwe get creatures make an effort to produce extra mana, snipe your opponent’s creatures, or create additional symbolic creatures for your side. This leads to more interesting decision-making than the amonket version, which was often simply “effort to attack unless I can attack normally”. As another fun expansion, there is a set of cards where you can effectively make an effort yourselfgiving you a huge effect for little money, but denying you access to most of your mana on the next turn.

This cycle features the original gods of Amonkhet, who are usually brutally destroyed by Bolas now that their roles have been completed. As part of the attack on the city, three more gods arrive, who have lost their original purpose and personality. Wonderful, these cards don’t even have names – what were once revered gods of the airplane are now the followers of Bolas.

torment is meant to push home the general feeling of despair, but eventually falls a bit flat. torment appears on many of the creatures serving Bolas and punishes anyone who is on the defensive, causing them to lose extra life even if the creature cannot reach the player. It’s not really frustrating to face down like the defensive deck, and nice to use in an aggressive deck, but compared to the rest of the set it feels a bit tacky and dull.

immortalize is much more resonant, with Bolas building an advanced zombie army from the cream of the crop. Like embalming, immortalize cards can be played once from the graveyard, giving them a second chance to fight for you, but unlike embalming they get a hefty stat boost in exchange for higher mana costs. Creatures brought back with immortalize are always set to four strength and four toughness, and often have abilities that take advantage of their increased size.

The closing piece for immortalize is the new set of zombie tokens (representing the resurrected minions) that can be collected from booster packs, depicting the unnaturally blue crystal-clad abominations with decorations inspired by Egyptian mythology. Along with the mechanical implications, giving players something to do both early and late in a typical game of Magic—immortalize is definitely the star of the set, and we’re happy to see it appear as a riff on embalming.

The last mechanical theme is deserts, a special subtype for countries. There are a few cycles of Desert countries (two for each color) that you have slightly different to do with additional countries – some that feature Cyclingsome that you can sacrifice everything with deserts (including herself) for skills often strong enough to turn a game around. There are also a lot of cards that refer to desertsget a small bonus if you have one in the game or in the graveyard – a nice touch to avoid the bad moment of sacrificing or cycling a Desert to draw a bunch of candy Desert-loving camels. The low rarity and high number of these cards stops deserts from feeling like they’ve just been glued to the set – most games will see a few pop up and have an effect.

The only downside is that deserts are a parasitic mechanic, undermining something about Magic so many love – combining cards from different sets to create something powerful, or ridiculous, or both – like deserts have no special interactions with older cards.

Is Hour of Devastation pleasure?

LOVE features good, solid Magic gameplay, with a few twists to make it stand out. There is a concerted effort to produce something for most types of players; tight and efficient for the highly competitive, big and blunt for the bon vivant, smart and weird for the experimental, tasteful for the lore nerd. The real victory of Cycling and immortalize– together at about 15% of the cards – is the smoothness they add to the gameplay, which has prevented a few of those games where the inherent variance of a deck of cards could have slipped from pleasure to frustration.

With the evolution of make an effortdefensive strategy seems much more feasible, allowing players to try out a variety of card game styles and in-game tactics, especially in the limited formats, which we highly recommend as the way to play Magic. In Constructed formats, there’s a ton of power here to discover and explore in the coming months for Standard, but just a few potential tricks for the more niche Eternal formats.