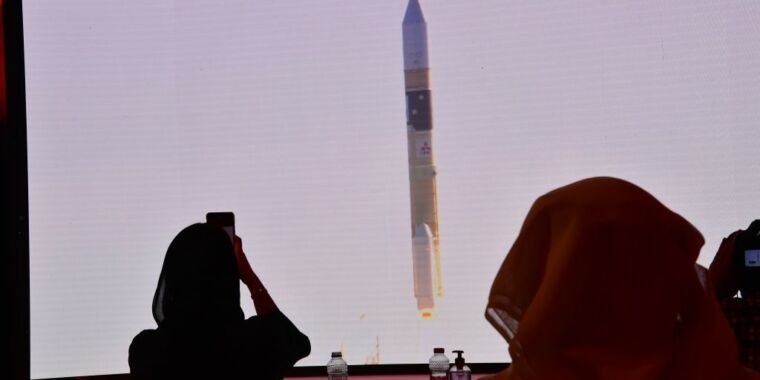 On Sunday, a Japanese-built rocket launched a 1.35-ton probe sponsored by the United Arab Emirates into low Earth orbit. The spacecraft is now on its way to Mars, where it should enter orbit around the Red Planet in February 2021.

The “Mars Hope” mission represents a partnership between the Arab country – which aims to inspire a future generation of scientists and engineers – and several American academic institutions, including the University of Colorado Boulder. The program was administered in the United Arab Emirates and the spacecraft was built in a lab in Colorado.

“This is a huge leap forward for the UAE’s ambitious space program,” said Ahmad bin Abdullah Humaid Belhoul Al Falasi, chairman of the UAE Space Agency, after the launch. “The mission is a catalyst that has already served to significantly accelerate the development of the UAE’s aerospace, education, science and technology sectors.”

The orbiter will bring to Mars three scientific instruments designed to study the Martian atmosphere. At a press conference ahead of Sunday’s launch, Sarah Bint Youssef Al-Amiri, the mission’s deputy director, said the goal is to better understand the weather systems on Mars. The probe will focus on day-to-night transitions and understand how far oxygen and hydrogen from the planet’s thin atmosphere extend into space.

Indeed, the scientific data collected by the Hope mission should help fill some gaps in scientific knowledge about Mars, if the probe successfully enters Mars orbit. But it is clear that the UAE has sponsored the $200 million mission as a source of inspiration for the younger people of the country.

“We want to send a message to the youth,” said Omran Sharaf, the project’s director. †It’s about the future of our economy, to inspire the younger generation to get into science, technology, engineering and medicine.” The country has already seen a shift from college majors like finance to the sciences, he said.

The United Arab Emirates, a small country in the Arabian Peninsula bordered by Oman and Saudi Arabia, has set a six-year deadline to design, develop and launch the mission. Sharaf said the only way to complete the probe on time and on budget was to work with international partners, with facilities to build such a spacecraft.

And now the land is on its way to Mars. Only Russia, the United States, the European Union and India have so far successfully launched a spacecraft into orbit around Mars. In total, about half of the missions to the orbit of Mars or the surface of the planet have failed. Sharaf recognizes this challenge. “It’“It’s more about the journey and the impact,” he said. “Achieving Mars is certainly one of the goals, but not reaching it would not mean the mission has failed.”