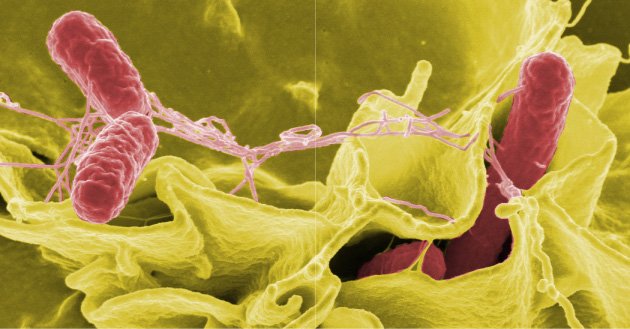 Once scientists figured out how to harness the power of antibiotics, bacteria hit back. After clinical trials of penicillin around 1941, doctors documented the spread of penicillin-resistant drugs Staphylococcus aureus among hospital patients in 1942. By the late 1960s, more than 80 percent of S aureus bacteria isolated in and outside hospitals proved resistant to the revolutionary drug.

It is a general pattern that has led to the antibiotic resistance crisis the world is now facing. In 1945, Alexander Fleming himself – the discoverer of penicillin – even warned of such an “age … of abuses”, in which strong public demand for antibiotics would fuel the bacterial resistance that would render the “miraculous” drugs impotent.

But the problem isn’t just overuse in humans. And sometimes bacteria aren’t just one step behind — they may be one step ahead, according to a new study in the Lancet infectious diseases.

Genetic analyzes of 288 bacterial isolates collected between 1911 and 1969 from 31 countries show that Salmonella developed resistance to an antibiotic several years before that drug even hit the market. The finding suggests that the diarrhea-causing bacteria were somehow primed to resist the semi-synthetic antibiotic ampicillin before doctors could prescribe it in the early 1960s. Excessive use in humans has therefore not led to the emergence of this resistance.

Instead, the authors speculate that overuse of a related antibiotic – penicillin G – in animals may be to blame. In the 1950s and 1960s, farmers used low doses of penicillin G to promote growth in poultry and pigs and to prevent infections in pigs. The authors, led by bacteriologist François-Xavier Weill of the Institut Pasteur in Paris, suspect that the low doses of the drug left in the waste, water and soil around farms may have stimulated the development and spread of genes that make bacteria resistant. to make. to the antibiotic. Since ampicillin is a derivative of penicillin, it may have contributed to them becoming resistant to the newer drug as well.

“While our study cannot establish a causal relationship between penicillin G use and the emergence of transmissible ampicillin resistance in livestock, our results suggest that the non-clinical use of penicillins such as [penicillin G] may have encouraged the evolution of resistance genes in the late 1950s,” Weill said in a press statement.

Ampicillin was discovered in 1958 and marketed in 1961 as the first “broad spectrum” penicillin. But like its predecessor, it soon met resistance. In the second half of 1962, doctors encountered an outbreak of ampicillin-resistant Salmonella enterica serotype Typhimurium in the UK. Several such outbreaks followed in subsequent years, and researchers reported finding several strains in humans and pigs that were resistant to multiple drugs (including ampicillin resistant).

The timeline might suggest that ampicillin use in humans has spurred resistance and outbreaks — they tracked the drug’s release in 1961. But S enterica serotype Typhimurium is a zoonotic germ, meaning it can cause gastrointestinal infections in a range of mammals, including livestock. The rapid appearance of ampicillin-resistant strains on farms aroused suspicion among scientists. In the late 1960s, researchers in the UK warned that penicillin use on farms could indeed be the cause of the rapid rise in resistance.

To better understand the emergence of ampicillin resistance, Weill and colleagues collected 288 S enterica serotype Typhimurium isolates collected between 1911 and 1969 in Europe from humans, animals and feed. Each isolate was tested to see which antibiotics it was resistant to. The researchers also decoded the whole genome – performing whole genome sequencing – for 225 of the isolates (redundant skipping).

Of the 288 isolates, 253 (88 percent) were susceptible to all antibiotics, leaving 35 resistant to at least one type of antibiotic. Eleven of these were resistant to ampicillin – and all of them were also resistant to penicillin G. Three of the ampicillin-resistant isolates were archived before ampicillin was released in 1961. All three were collected from humans. One was collected in France in 1959 and the other two in Tunisia in 1960.

Rebels for no reason

As for the three isolates that were ampicillin resistant before there was ampicillin to resist, they all had a common resistance gene called blaTEM-1B. But the two from Tunisia had their bla genes located on a different plasmid than the French isolate.

“So the early emergence of ampicillin resistance in S enterica serotype Typhimurium was not due to a single expansion of a clonal population that had acquired a particular plasmid encoding a β-lactamase [bla]but to multiple independent acquisitions of blaTEM gene-carrying plasmids by different bacterial populations,” the authors concluded.

In an accompanying commentary, researchers from the Institute of Tropical Medicine Antwerp, Belgium conclude:

Despite the limitations inherent in the retrospective nature of the study… [the authors] clearly demonstrate the existence of ampicillin resistance before the commercial introduction of the drug…The findings underscore the importance of One Health approaches to tackling antibiotic resistance, which argues that human health is linked to animal health and the environment.

The use of antibiotics for growth promotion and prophylaxis was completely banned in Europe in 2006, but continues elsewhere in the world. The U.S. Food and Drug Administration has issued guidelines to end the practice on U.S. farms, but those guidelines are not mandatory.

Earlier this month, the World Health Organization called for a total ban on the use of antibiotics in healthy animals.