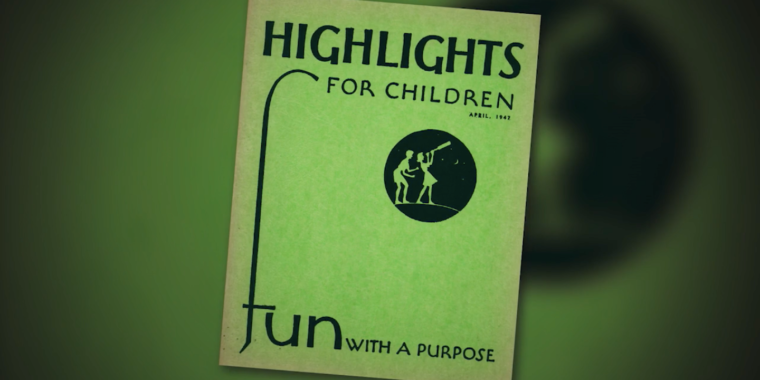 AUSTIN, Texas – If you’ve ever visited a pediatric dentist or loved reading between the ages of two and 12, chances are you’ve come across Highlights. The legacy kids magazine turned 70 in the summer of 2016 and has been a cultural constant over the decades. Everyone knows the Hidden Picture Search or the long-running Goofus and Gallant comic, but poetry by Lewis Carroll, Emily Dickinson, and Langston Hughes has graced its pages as well (and unpublished entries from the likes of Walter Cronkite are in the archives). The Highlights brand has become such a part of the American fabric that it has been referenced in pop culture for decades, from everywhere Beavis and Butthead until The Colbert Report, crazy men, The Simpsons, Blackish, and Arrested development.

If you haven’t browsed through the magazine recently, Highlights will probably surprise you after all these years. A new documentary called 44 pages (which is the constant size of the magazine since there is no advertising) chronicles Highlights’ history, process and philosophy leading up to the 70th anniversary edition in June 2016. At South by Southwest, the film showed that Highlights is a more complex publication than your younger self has ever recognized. Now, as it has done throughout its history, Highlights quietly hides real, mature science and technology in every issue, as seamlessly as it hides a hammer in the bark of an illustrated tree.

“The evidence is clear”

In an era of declining print revenues and subscriptions, Highlights maintains a fairly wide footprint. The magazine reaches two million households each month (and receives about 300 unsolicited freelance submissions each month), while targeting children ages six to 12. So with that potential influence, it’s refreshing to see staff like science editor Andy Boyles on board.

“We want children to know that science is a continuous, self-correcting process and not a collection of facts,” he says immediately after being introduced. “When I first got a question about ‘when are we going to die from global warming’, I wondered if we’re doing things right — what age is the right age to learn about such things?”

Highlights obviously doesn’t publish stories with DOIs at the bottom. When your primary target audience is children, certain topics need to be explained in the simplest terms. And while the editors generally try to never scare readers (so that stories about guns stop appearing, and even hurricanes and earthquakes can cross the horror line), Boyles helps the team find kid-friendly solutions to real-world problems. After receiving letters about climate change, for example, Highlights did a nonfiction piece about polar bears that introduced information about climate change while also offering hope about the bears’ perseverance.

Highlights is produced in Honesdale, Pennsylvania, a small town near the Scranton area in the northeast corner of the state. It’s a middle-class, somewhat homogeneous rural area that can sometimes represent large swathes of the country (nearby Luzerne County can too, based on all the media that voters in Wilkes-Barre look for as microcosms of the 2016 election). But Highlights‘ encompasses much more than its immediate home: religions of the world are represented, LGBT couples finally appeared in illustrations this year, printed company products are now available in 16 languages. The team strives to present the larger world as it is (“It’s crucial for us to include this diversity in the magazine,” said Judy Burke, editor-in-chief. “That makes the world interesting”). That means we don’t shy away from real science, even if some readers — or perhaps more accurately their parents — choose not to believe it.

“A lot of families don’t agree with evolution and don’t want their children exposed to it, but we do agree with evolution,” Boyles says. “We never want to poke anyone in the eye with it — that’s not our way. But it would be irresponsible to raise dinosaurs without telling them how long ago they lived or how we know what we know, because the evidence is clear. ”

Today, Highlights strives for scientific content in every issue. That’s why the magazine launched a column on robotics every other month from last summer.

(Digital) fun with a purpose

44 pages show well how Highlights uses traditional and modern aspects of media towards its unique editorial goals. Director Tony Shaff gives us cinematic images of sticky notes and local focus group work being done in nearby elementary schools. We hear current editors discuss whether a nonfiction movie about a mathematician will complement an article about making pizza, or discuss how to effectively use children’s screen time (“I’ve read about so much time children spend on their devices — can you come up with a Goofus and Gallant who talks about that?” asks editor-in-chief Christine French Cully).

Highlights still engages in some decidedly old-fashioned practices. Copy editors don’t just read text in their favorite word processor, they test recipes or execute crafting instructions themselves to check facts. And despite receiving over 3,000 letters a year, every letter is still read and answered honestly by staff, regardless of subject. Is smoking good or bad? My friend says brown is the dumbest color in the book – what book are they talking about? My mom says being a spy is a job only found in the movies – is that true?

Through this feedback opportunity, the magazine has even been able to help children deal with real-life distress and insecurity, as seen in letters about adult abuse, fears about school after Sandy Hook, or insecurity about self-identity and gender.

At the same time, the magazine is doing its best to constantly evolve along with technology and our ever-improving understanding of childhood. 44 pages contains discussions of developmental compression, the idea that children just grow up faster. But while today’s youth may be more advanced physically and cognitively, magazine staff note that the social/emotional growth rate has not increased in the same way (informative decisions such as how the publication handles the potentially scary information mentioned above).

And towards the end of the movie we meet a couple Highlights employees at Fingerprint, an app design company based in San Francisco. While Highlights still considers print to be the core of its business, the editors recognized the need for a mobile experience as children interact with our devices more and more. “Most kids have a phone at 10, 70 percent have a tablet at 8, and at 12 they have their own social media accounts and seemingly unlimited access to mobile,” Fingerprint notes in the film.

It took a year of planning, but Highlights and Fingerprint debuted the brand’s first digital magazine subscription last summer. The first results documented in 44 pages sounds promising: puzzles and quizzes may be the two sections users spend the most time on, but reading accounts for 12 percent of all content used in the app. That fits into a mantra that is repeated throughout the film: Highlights thinks of himself as ‘fun with a purpose’. So whether it’s dinosaurs, robots, comics or apps, a lot of thought goes into making the next generation think every month.

“We’re trying to create kids who are creative, who care about other people, who think and reason about people,” said Linda Rose, associate editor. “How can we not take advantage of that?”

44 pages is currently on the film festival circuit, with dates upcoming in Dallas, Cleveland and Winston-Salem, North Carolina. Future screenings can be found on the film’s official website.

Disclaimer: The author grew up near Honesdale in Archbald, Pennsylvania. He had a subscription as a child and once considered a fellowship with the magazine.